How many times have you downloaded an executable file, but were afraid to run it? Have you ever been in a situation which required a clean installation of Windows, but didn’t want to set up a virtual machine?

At Microsoft we regularly encounter these situations, so we developed Windows Sandbox: an isolated, temporary, desktop environment where you can run untrusted software without the fear of lasting impact to your PC. Any software installed in Windows Sandbox stays only in the sandbox and cannot affect your host. Once Windows Sandbox is closed, all the software with all its files and state are permanently deleted.

Prerequisites for using the feature 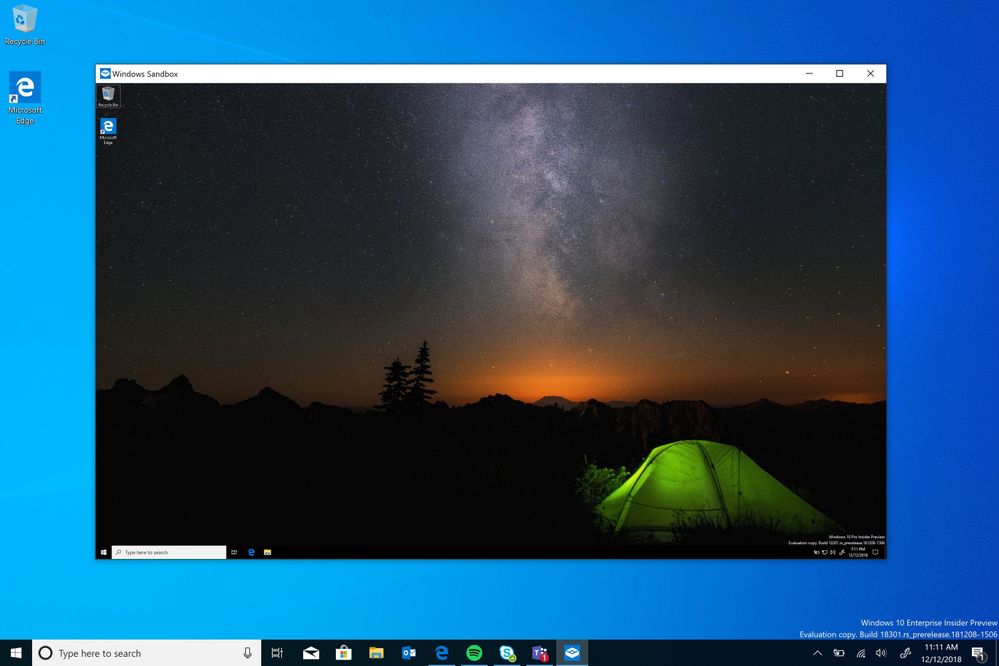 Windows Sandbox respects the host diagnostic data settings. All other privacy settings are set to their default values.

Since this is the Windows Kernel Internals blog, let’s go under the hood. Windows Sandbox builds on the technologies used within Windows Containers. Windows containers were designed to run in the cloud. We took that technology, added integration with Windows 10, and built features that make it more suitable to run on devices and laptops without requiring the full power of Windows Server.

Some of the key enhancements we have made include:

We want to always present a clean environment, but the challenge is that some operating system files can change. Our solution is to construct what we refer to as “dynamic base image”: an operating system image that has clean copies of files that can change, but links to files that cannot change that are in the Windows image that already exists on the host. The majority of the files are links (immutable files) and that's why the small size (~100MB) for a full operating system. We call this instance the “base image” for Windows Sandbox, using Windows Container parlance.

Memory management is another area where we have integrated with the Windows Kernel. Microsoft’s hypervisor allows a single physical machine to be carved up into multiple virtual machines which share the same physical hardware. While that approach works well for traditional server workloads, it isn't as well suited to running devices with more limited resources. We designed Windows Sandbox in such a way that the host can reclaim memory from the Sandbox if needed.

Additionally, since Windows Sandbox is basically running the same operating system image as the host we also allow Windows sandbox to use the same physical memory pages as the host for operating system binaries via a technology we refer to as “direct map”. In other words, the same executable pages of ntdll, are mapped into the sandbox as that on the host. We take care to ensure this done in a secure manner and no secrets are shared.

With ordinary virtual machines, Microsoft’s hypervisor controls the scheduling of the virtual processors running in the VMs. However, for Windows Sandbox we use a new technology called “integrated scheduler” which allows the host to decide when the sandbox runs.

For Windows Sandbox we employ a unique scheduling policy that allows the virtual processors of the sandbox to be scheduled in the same way as threads would be scheduled for a process. High-priority tasks on the host can preempt less important work in the sandbox. The benefit of using the integrated scheduler is that the host manages Windows Sandbox as a process rather than a virtual machine which results in a much more responsive host, similar to Linux KVM.

The whole goal here is to treat the Sandbox like an app but with the security guarantees of a Virtual Machine.

As stated above, Windows Sandbox uses Microsoft’s hypervisor. We're essentially running another copy of Windows which needs to be booted and this can take some time. So rather than paying the full cost of booting the sandbox operating system every time we start Windows Sandbox, we use two other technologies; “snapshot” and “clone.”

Hardware accelerated rendering is key to a smooth and responsive user experience, especially for graphics-intense or media-heavy use cases. However, virtual machines are isolated from their hosts and unable to access advanced devices like GPUs. The role of graphics virtualization technologies, therefore, is to bridge this gap and provide hardware acceleration in virtualized environments; e.g. Microsoft RemoteFX.

More recently, Microsoft has worked with our graphics ecosystem partners to integrate modern graphics virtualization capabilities directly into DirectX and WDDM, the driver model used by display drivers on Windows.

At a high level, this form of graphics virtualization works as follows:

This process is illustrated below: 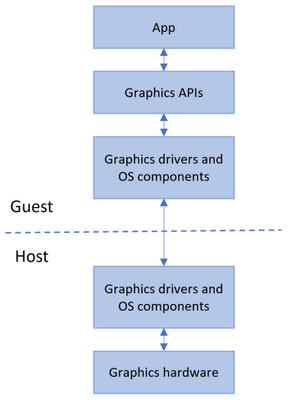 This enables the Windows Sandbox VM to benefit from hardware accelerated rendering, with Windows dynamically allocating graphics resources where they are needed across the host and guest. The result is improved performance and responsiveness for apps running in Windows Sandbox, as well as improved battery life for graphics-heavy use cases.

To take advantage of these benefits, you’ll need a system with a compatible GPU and graphics drivers (WDDM 2.5 or newer). Incompatible systems will render apps in Windows Sandbox with Microsoft’s CPU-based rendering technology.

Windows Sandbox is also aware of the host’s battery state, which allows it to optimize power consumption. This is critical for a technology that will be used on laptops, where not wasting battery is important to the user.

As with any new technology, there may be bugs. Please file them so that we can continually improve this feature.

We look forward to you using this feature and receiving your feedback!