LS, it seems that the latest preview build does not get installed.

What's even more mysterious, is that the previous, successful installation, was a newer release than the one not installing currently - see below 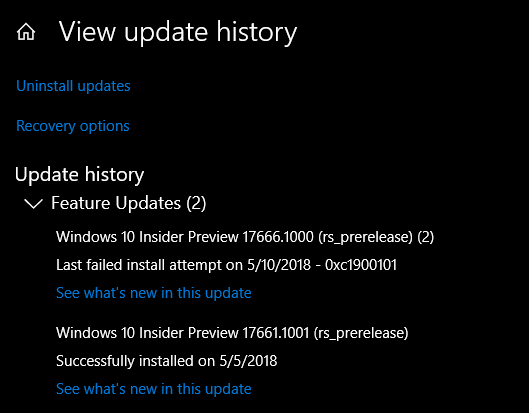 strange, I added a screen-capture, which apparently disappeared the moment I submitted the message
1 Like
Reply

Has been fixed by resetting the Windows Update.

How 17661 can be called newer than 17666? You read the digit carefully.
0 Likes
Reply
Anonymous
replied to  Alex Blink

How so? Failed update for me too, rolled back to my previous version on its own. Pls explain.....
0 Likes
Reply

It's an old solution, helped me a lot of times.

- Edit with notepad or something else.

As you can see from the code, it just stops WU services, renames related directories and runs the services again.

Have you enough space on the system drive?

You are absolutely right sir, thank you for clearing that up
0 Likes
Reply

Thanks for the suggestion.

Tried the windows update troubleshooter, found problem and corrected it, but the update to 17666 still unsuccessful. Will keep repeating and hope for better luck.

I am also having the same issue. The installer hangs at "preparing to install - 80%" indefinitely.  I tried running the windows update bat file provided above but it ran headfirst into the SOPHOS virus scanner, a service that it can't turn off, and failed.

I had the same behavior too.

Sometimes it hung on preparing step at 100%, sometimes at 99%, 70%, sometimes it went to the next step and then could hang too.
I was just watching to the task manager, is it doing something or not.
And it was, but then like crashing and starts to prepare again from the beginning.

By the way, when I finally get updated it was really long "preparing", "installing", but the main update process went smoothly.

I have the same issue.

So far there have been 4 failed attempts on getting the update.
I did use the bat file method mentioned earlier in this thread but it didn't do any difference for me.
I'm rn going to see if after using the troubleshooter it would work.

Anyone managed to figure out any other alternative solution if it still doesn't work?

No luck so far - the .bat file method failed, have tried the troubleshooter now 4 times with no success.

I hope this is a no issue with the next update, hopefully sometime next week.

How so? Failed update for me too, rolled back to my previous version on its own

I had a failed update twice with an error code, now the Status says installing, it gets up to 100% and then starts over at 0%. The status changes to "installing" back to "preparing to install", just constantly cycling.

The screen flickers constantly as Explorer seems to be stopping and restarting.

There was a antivirus update that is finally done so some progress is being made. Hopefully this next round gets finally complete.

I was running into this on my Surface Pro 4. Disconnecting the Surface Dock before restarting seemed to fix it for me.