While installing the Windows 11 Dev update to build 22610 today, Windows Defender arrested "Severe" malware, an actively running process, not just an inactive file. The update errored with 0xc190011f at the same time, so 22610 wasn't installed. The only recent downloads I have were never run. 22598 is plenty new, so unpatched vulnerabilities in the existing build shouldn't be why it became infected. Only a blank pen drive was connected recently. The Chromium browser was recently updated, so it wasn't an exploit through an outdated browser.

The error code is 0xc190011f and the Windows Defender detection is

I performed a Quick Scan and Offline Scan with Windows Defender, updated Emsisoft Emergency Kit and used it to scan from the Recovery Environment, used SFC and DISM, performed a Full Scan, deleted Software Distribution, made a System Image Backup, and installed the 22610 update again. Threats found. At 5%, the Windows Defender notification appeared and the 0xc190011f error code in Windows Update. This was reproduced 4 times in total, quicker when retrying without having deleted Software Distribution.

Note that screenshots and other attachments are only visible to Microsoft.

Microsoft Support refused this issue because the operating system is currently under development, as if that makes it any more acceptable to distribute malware through Windows Update. It doesn't matter that it's under development, having a "Severely" malicious update for download is intolerable.

If it's completely unknown how to solve the "Severe" Behavior:Win32/Powessere.SA while downloading build 22610 because it's so new, then it's not that difficult to simply pull 22610 from being available for download. I know this is the wrong place to post this, but this is where Microsoft Support said to.

I know it's not supported, but not providing Behavior:Win32/Powessere.SA has to be maintained at all times. Preview builds being unsupported translating to it being acceptable to distribute Behavior:Win32/Powessere.SA is as if the Windows Defender team saying they don't need to maintain their antivirus signatures because none of the malware is their own and therefore not their responsibility to support.

Microsoft Support said "The Windows Insider forum is a peer to peer group of volunteers that are testing future beta releases of Windows 10 and as it is beta software Microsoft offers no support to Insiders who voluntarily download and test these beta builds."

Translation: The Windows Insider forum is a peer to peer group of volunteers that are downloading malicious beta releases of Windows 11 and as it is beta software Microsoft offers no assurance to Insiders who voluntarily download and test these beta builds that they aren't infected with malware.

Microsoft Support also said "When you first joined the Insiders you should have read the Terms of Service and Code of Conduct prior to joining." I did though, nothing in the agreement makes it any more acceptable to provide Behavior:Win32/Powessere.SA no matter how buggy the builds may have to be.

"There are many very qualified Insiders who use this forum who should be able to help you."

I myself do spend a highly significant amount of time each day assisting others, and did for myself, but the root issue can only be solved by Microsoft by pulling the 22610 download or confirming the Windows Defender detection is a false positive.

At the same time, "The Windows Insider forum is a peer to peer group of volunteers"

If Microsoft is to provide severely malicious Behavior:Win32/Powessere.SA infected updates of Windows 11, that's not secure anyway, so if security is out the window even with the latest, why don't I just revert to using Windows 7, the best Windows ever, which is by far the finest ever produced? 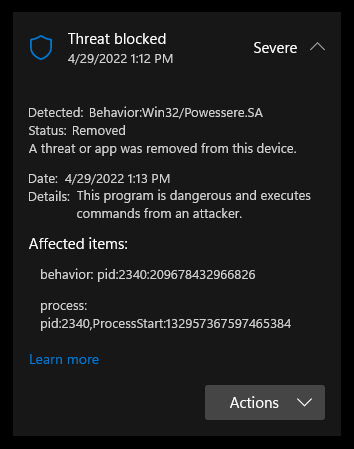 have you used this scanner?

Of course, if possible, you can upload the infected file: 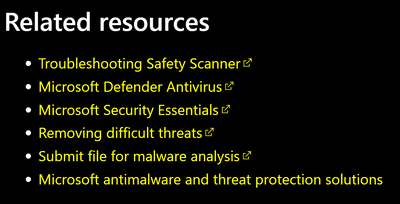 Microsoft Updates are clean and not infected.
Did you install the Windows 11 from official Microsoft website?
Try run a full scan with Microsoft Defender.
You did the right thing by sending Feedback and hopefully the Windows team will investigate the issue.
0 Likes
Reply

Okay I will use that next, but nothing was detected in the Windows Defender Full Scan or with Emsisoft Emergency Kit. It appears no malicious file is found on the disk even immediately after the incident, but only the process actively running.
0 Likes
Reply

Nothing was detected by the Microsoft Safety Scanner.
1 Like
Reply

It might have been a false-positive detection.
Sometimes, the Anti-Malware engine detect safe component as unsafe based on their behavior.
Do you know the location of files or components which detected as malicious earlier?
0 Likes
Reply

Great - this confirms that Microsoft Defender works correctly!
The warning you received was caused by the latest version, or an unidentified insider program process (Defender downloaded the latest threat definitions) it caused that the danger was no longer detected!
Thank you for your post because such problems need to be clarified - of course you understand that the diagnostic data was automatically transferred to Microsoft - this helps a lot!

No, the only detection was a running process, which is in the memory, and it did not specify the process name, only the single use unique identifier. It might be C:\Windows\SoftwareDistribution, as deleting that folder causes it to take longer when retrying before the malicious item occurs. None of the scanners detected anything that was saved in C:\Windows\SoftwareDistribution or any other folder.
0 Likes
Reply

"this confirms that Microsoft Defender works correctly!... it [Windows Defender] caused that the danger was no longer detected!" But if this item is to be truly malicious, what about all the users with a different antivirus? Why should users have to use use Microsoft antivirus to be protected against Microsoft update malware? If it's a false positive, then that's not quite proper.

"The warning you received was caused by the latest version" I know it is caused by 22610, and not anything else I did. That's why I posted this.
0 Likes
Reply

Hello,
Suggest you try to perform a clean installation and backup your data, otherwise you could spent a lot of time to rescue your OS....
0 Likes
Reply

I do not understand why after one warning , which was caused by the process of updating the test version - do you recommend performing a clean installation that will remove everything?

I think this is an exaggeration!

nope, just like you said it was a recommendation of solution to solve the problem. And more than that it is a simple quick fix... Considering we don't have the full detail of the info with that copy came from. But you if you think you want to tackle down all of the virus with other issues it brought then go for it.

In this thread, defender reported a threat to the process before downloading the latest threat definitions so I rated it as correct
0 Likes
Reply

In case you perform multiple scans with different Anti-Malware products, I believe you are safe. However, in case you have sample of malicious files, and you believe they are not being detected let us know.
0 Likes
Reply

This problem recurs in other users - the insider program, so it is not a malicious process.
0 Likes
Reply

Other users confirm that disabling anti-virus protection before installation ( 22610. ) ensures proper installation of the update!
So you have to decide what steps to hook up!