Hi, when I was trying to install PostgreSQL ODBC driver x64 version, I got a warning saying the driver could not be loaded due to system error code 193.

It seems that the program C:\Windows\System32\odbcad32.exe shown in Task Manager saying it is of ARM64 Architecture.

And the reason for PostgreSQL not able to be installed is due the error that System DSN could not be added with this ODBC Data Source Administrator (64-bit) ARM64 version C:\Windows\System32\odbcad32.exe

The error message shows as below: 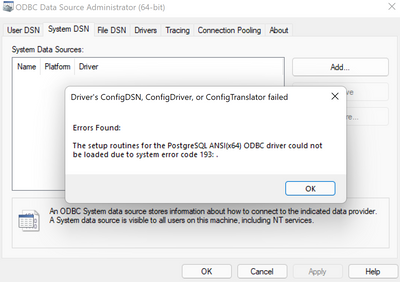 I also tried to copy from x64 version from other machine, but Win11 does not allow me to write to folder C:\Windows\system32 and the x64 files won't be able to run if I can't put it under C:\windows\system32 folder.

Is there any workaround for this problem?

I have successfully copied x64 version to C:\Windows\system32 and it runs showing architecture X64. BUT, the postSQL ODBC x64 installer still fails.
I even tried to copy x86 vertion, it also failed but with different error code.
To summarise:
1. arm64 version: psqlodbc Setup show ODBC error 13: The setup routines for the PostgreSQL ANSI(x64) ODBC driver could not be loaded due to system error code 193. Verify that the file PostgreSQL ANSI(x64) exists and that you can access it.
2. x64 version or x86 version: ODBC error 0: verify that the file PostgreSQL ANSI(x64) exits and that you can access it.

*** odbccp32.dll is the one that will give different error message when installing psqlodbc-setup (version 13.02.0000) if it alone was replaced. The problem could be narrowed down to this.

Hi @comnot have you manage to solve this problem? I have the same issue on same environment. Thanks.

Hi, do you have any update? I've the same issue and I do not know how to fix the problem...
0 Likes
Reply

Hi @Lussi91 unfortunately I don't have any update, but I'm keep trying and if I have any success I will post here.

@ have the same Problem with installing MariaDB ODBC only 32bit could be installed but did not work.

No User DNS is in the entrys and System DNS adding also Producer Error 193 in 32bit there is a Warning that i can not edit System DNS but could do it with no success on Connection.

xampp up and Running Heidi can connect.

What is the sense in having it avail with no Function ?