I’m proud to announce that Windows Internals, 5th Edition is now available. It’s been a long road, but a writing a book of this scope 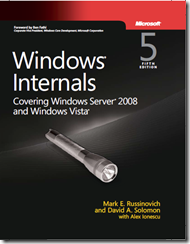 We decided not to keep coverage of Windows XP and Windows Server 2003 because describing the commonalities and differences in certain areas where there have been significant changes across versions would have been complicated and confusing. However, 99% of the book applies directly to Windows 7 and Windows Server 2008 R2, so you can get a jump start while we work on the 6 th edition, which will add coverage of these new versions of Windows. We anticipate adding another 75-100 pages of content (and not making any significant changes to existing text) and are shooting to have the book completed by the end of the year.

You can watch me and David Solomon talking about the book and our history of collaboration in this Channel 9 interview we recorded a couple of weeks ago. David and I coauthored the previous two editions alone, but this time around we add a third contributor, Alex Ionescu . Alex came to our attention back when he was a primary contributor to the kernel of the ReactOS project, an attempt to develop an open source clone of Windows. Alex now teaches Windows internals training classes with David Solomon, including on campus here at Microsoft like I used to do before I joined Microsoft. Needless to say, Alex was a valuable addition to our team on this revision of the book.

Be sure to visit the official Windows Internals book page , where you can find more information on the book’s contents, errata (there is none at this point), and the downloads for the book’s demonstration programs like Testlimit, a tool that I’ve used in some of my Pushing the Limits of Windows blog posts to highlight various resource limits in Windows.

I have one more thing I want to share with you, a video that the Windows marketing team put together as part of the Talking About Windows campaign that has elementary school students Sam and Trevor talking about Sysinternals. I didn’t know about the video until they sent it to me, and I have to admit that besides being flattered, I laughed out loud.