VirtMemTest: a utility to exercise memory and other operations

VirtMemTest: a utility to exercise memory and other operations


I wrote the first versions of VirtMemTest while working on the Windows Sysinternals Administrator’s Reference .  The utility made it easy for me to perform a variety of memory operations and to observe how different Sysinternals utilities reacted to them.  I eventually added CPU-stress capabilities, hung UI simulation, and crash-on-exit, particularly for exercising ProcDump .  I have used it in a few of my Sysinternals Primer presentations (as has Andrew Richards in his sessions), and had promised to post it to my blog at some point.  Finally, here it is.  The UI is a bit primitive, but it’s strictly for hardcore geeks who don’t care about such banalities. :)


The download includes x86 and x64 executables and their corresponding symbol files, and the VC++ (2010) project source. VirtMemTest.exe is the 32-bit version, and VirtMemTest64.exe is the renamed x64 version.  Note that the x64 symbol file is not also renamed. 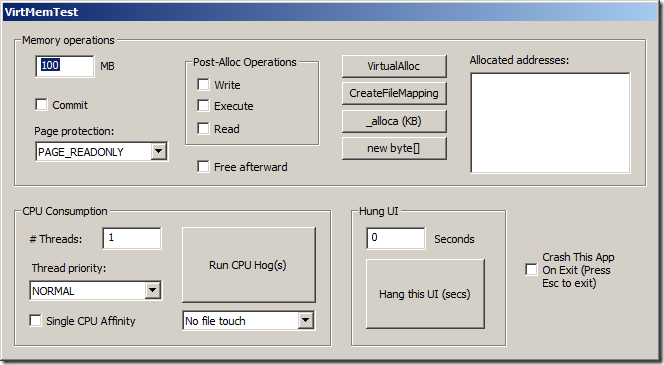 
The VirtualAlloc, CreateFileMapping, _alloca and new byte[] buttons perform memory allocation operations according to options you select in the rest of the Memory Options group box.  VirtualAlloc is the one I use almost all the time, and the operation for which most of the other options apply.  VirtualAlloc simply calls the VirtualAlloc API ; CreateFileMapping creates an unnamed file mapping backed by virtual memory; _alloca performs a stack allocation; and new byte[] uses the C++ “new” operator to allocate heap memory.


With VirtualAlloc, memory is reserved but not committed unless you select the “commit” option.  Select the desired page protection for the new allocation with the Page Protection dropdown.


The Write, Execute and Read checkboxes perform the corresponding operations on the allocated memory after it has been allocated.  This is an interesting way to observe what happens when you try to read from uncommitted memory or to write to read-only memory; you can test Data Execution Protection (DEP) by executing memory that has or has not been marked for execution.  Note that the memory you’ll try to execute won’t contain any valid opcodes, so you’ll crash one way or another – either because of DEP or invalid operations.


When you click the “Run CPU Hog(s)” toggle button, VirtMemTest spins up one or more CPU-bound threads that run at the priority you specify in the Thread Priority dropdown until you toggle the CPU Hog(s) button back off.  If you select “Single CPU Affinity”, all the threads will be scheduled only on CPU 0.  (This obviously has no effect on single-CPU systems.)


Specify the number of seconds you want VirtMemTest to be non-responsive to UI events, then click “Hang this UI”.


Press Esc to exit the app.  If the “Crash This App” option is selected, VirtMemTest will try to write to address 0 right before exit.

So:  Go have fun!  (According to some turbogeek definition of fun.)