That’s precisely what I had happen in response to a new feature in IE10. I didn’t know there was a problem, and therefore I wasn’t seeing the solution right in front of my eyes. In previous versions of IE (as well as in other browsers), a fairly common scenario is opening up a bunch of tabs when doing some research. When you’re done, it is possible to close just that one tab, or to close all of the tabs. But … what if you just want to close up the last few tabs, but leave some open?

Well, we actually make that easier now in IE10. Watch what happens as I close off tabs.

I start with 4 tabs open:

I then close the first tab:

Did you notice what happened? I didn’t at first either, but the tooltip should be a hint – each and every time I closed a tab, the tabs grew. Now, we’re used to that – when you get too many tabs for the default size, we automatically start crunching up the tabs to make more room for you, so as you close them, we can start to uncrunch them so you can see more. But – this is more than that. We not only uncrunch them, we grow them PAST the normal width – what we are doing is expanding the tabs so that after you close one, the close button on the next tab is directly underneath your mouse cursor so it is easier to close the one next! Then, when you move your mouse off of the tab strip, we’ll restore the tabs to their default sizes.

We will, in fact, grow the tab to some pretty big sizes. This is the biggest I can get the tabs to go on my little tablet PC, but it’s still nearly as big as my address bar: 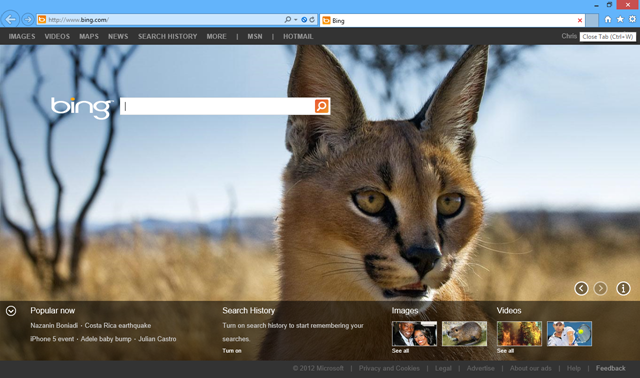 So, you can now much more easily close tabs if you have opened up a bunch. But me – well, I didn’t notice the feature. I thought it was a bug – I was trying to figure out why the tabs would sometimes get huge for no apparent reason! My wrist is programmed to slide over to the next tab I wanted to close and try to get it. Of course, then the tabs then grew, I would miss, and have to move back.

Now that I discovered the feature, I stay put and can leverage that feature!

Of course, being able to rapidly close tabs may lead you to close too many, so you may also want to know about the ctrl-shift-t keyboard shortcut to restore a closed tab…