In previous Pushing the Limits posts, I described the two most basic system resources, physical memory and virtual memory . This time I’m going to describe two fundamental kernel resources, paged pool and nonpaged pool, that are based on those, and that are directly responsible for many other system resource limits including the maximum number of processes, synchronization objects, and handles.

Here’s the index of the entire Pushing the Limits series. While they can stand on their own, they assume that you read them in order.

Paged and nonpaged pools serve as the memory resources that the operating system and device drivers use to store their data structures. The pool manager operates in kernel mode, using regions of the system’s virtual address space (described in the Pushing the Limits post on virtual memory) for the memory it sub-allocates. The kernel’s pool manager operates similarly to the C-runtime and Windows heap managers that execute within user-mode processes.  Because the minimum virtual memory allocation size is a multiple of the system page size (4KB on x86 and x64), these subsidiary memory managers carve up larger allocations into smaller ones so that memory isn’t wasted.

For example, if an application wants a 512-byte buffer to store some data, a heap manager takes one of the regions it has allocated and notes that the first 512-bytes are in use, returning a pointer to that memory and putting the remaining memory on a list it uses to track free heap regions. The heap manager satisfies subsequent allocations using memory from the free region, which begins just past the 512-byte region that is allocated.

The kernel and device drivers use nonpaged pool to store data that might be accessed when the system can’t handle page faults. The kernel enters such a state when it executes interrupt service routines (ISRs) and deferred procedure calls (DPCs), which are functions related to hardware interrupts. Page faults are also illegal when the kernel or a device driver acquires a spin lock, which, because they are the only type of lock that can be used within ISRs and DPCs, must be used to protect data structures that are accessed from within ISRs or DPCs and either other ISRs or DPCs or code executing on kernel threads. Failure by a driver to honor these rules results in the most common crash code, IRQL_NOT_LESS_OR_EQUAL .

Paged pool, on the other hand, gets its name from the fact that Windows can write the data it stores to the paging file, allowing the physical memory it occupies to be repurposed. Just as for user-mode virtual memory, when a driver or the system references paged pool memory that’s in the paging file, an operation called a page fault occurs, and the memory manager reads the data back into physical memory. The largest consumer of paged pool, at least on Windows Vista and later, is typically the Registry, since references to registry keys and other registry data structures are stored in paged pool. The data structures that represent memory mapped files, called sections internally, are also stored in paged pool.

Device drivers use the ExAllocatePoolWithTag API to allocate nonpaged and paged pool, specifying the type of pool desired as one of the parameters. Another parameter is a 4-byte Tag , which drivers are supposed to use to uniquely identify the memory they allocate, and that can be a useful key for tracking down drivers that leak pool, as I’ll show later.

There are three performance counters that indicate pool usage: 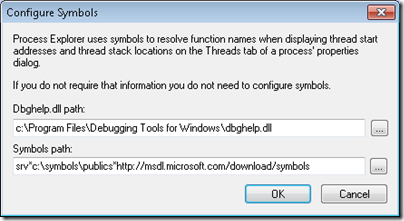 As I mentioned in a previous post, on 32-bit Windows, the system address space is 2GB by default. That inherently caps the upper bound for nonpaged pool (or any type of system virtual memory) at 2GB, but it has to share that space with other types of resources such as the kernel itself, device drivers, system Page Table Entries (PTEs), and cached file views.

Prior to Vista, the memory manager on 32-bit Windows calculates how much address space to assign each type at boot time. Its formulas takes into account various factors, the main one being the amount of physical memory on the system.  The amount it assigns to nonpaged pool starts at 128MB on a system with 512MB and goes up to 256MB for a system with a little over 1GB or more. On a system booted with the /3GB option, which expands the user-mode address space to 3GB at the expense of the kernel address space, the maximum nonpaged pool is 128MB. The Process Explorer screenshot shown earlier reports the 256MB maximum on a 2GB Windows XP system booted without the /3GB switch.

The memory manager in 32-bit Windows Vista and later, including Server 2008 and Windows 7 (there is no 32-bit version of Windows Server 2008 R2) doesn’t carve up the system address statically; instead, it dynamically assigns ranges to different types of memory according to changing demands. However, it still sets a maximum for nonpaged pool that’s based on the amount of physical memory, either slightly more than 75% of physical memory or 2GB, whichever is smaller. Here’s the maximum on a 2GB Windows Server 2008 system:

64-bit Windows systems have a much larger address space, so the memory manager can carve it up statically without worrying that different types might not have enough space. 64-bit Windows XP and Windows Server 2003 set the maximum nonpaged pool to a little over 400K per MB of RAM or 128GB, whichever is smaller. Here’s a screenshot from a 2GB 64-bit Windows XP system:

Finally, here’s the limit on an 8GB 64-bit Windows 7 system:

Here’s a table summarizing the nonpaged pool limits across different version of Windows:

The kernel and device drivers use paged pool to store any data structures that won’t ever be accessed from inside a DPC or ISR or when a spinlock is held. That’s because the contents of paged pool can either be present in physical memory or, if the memory manager’s working set algorithms decide to repurpose the physical memory, be sent to the paging file and demand-faulted back into physical memory when referenced again. Paged pool limits are therefore primarily dictated by the amount of system address space the memory manager assigns to paged pool, as well as the system commit limit.

On 32-bit Windows XP, the limit is calculated based on how much address space is assigned other resources, most notably system PTEs, with an upper limit of 491MB. The 2GB Windows XP System shown earlier has a limit of 360MB, for example:

Since 32-bit Windows Vista and later have dynamic kernel address space, they simply set the limit to 2GB. Paged pool will therefore run out either when the system address space is full or the system commit limit is reached.

Here’s a summary of paged pool limits across operating systems:

Because the kernel pools are used by almost every kernel operation, exhausting them can lead to unpredictable results. If you want to witness first hand how a system behaves when pool runs low, use the Notmyfault tool. It has options that cause it to leak either nonpaged or paged pool in the increment that you specify. You can change the leak size while it’s leaking if you want to change the rate of the leak and Notmyfault frees all the leaked memory when you exit it: 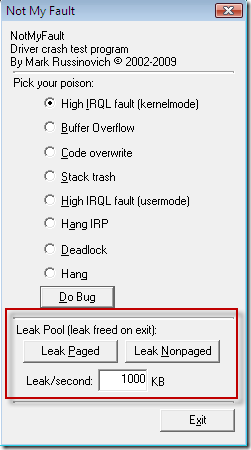 Don’t run this on a system unless you’re prepared for possible data loss, as applications and I/O operations will start failing when pool runs out. You might even get a blue screen if the driver doesn’t handle the out-of-memory condition correctly (which is considered a bug in the driver). The Windows Hardware Quality Laboratory (WHQL) stresses drivers using the Driver Verifier, a tool built into Windows, to make sure that they can tolerate out-of-pool conditions without crashing, but you might have third-party drivers that haven’t gone through such testing or that have bugs that weren’t caught during WHQL testing.

I ran Notmyfault on a variety of test systems in virtual machines to see how they behaved and didn’t encounter any system crashes, but did see erratic behavior. After nonpaged pool ran out on a 64-bit Windows XP system, for example, trying to launch a command prompt resulted in this dialog:

On a 32-bit Windows Server 2008 system where I already had a command prompt running, even simple operations like changing the current directory and directory listings started to fail after nonpaged pool was exhausted:

On one test system, I eventually saw this error message indicating that data had potentially been lost. I hope you never see this dialog on a real system!

Running out of paged pool causes similar errors. Here’s the result of trying to launch Notepad from a command prompt on a 32-bit Windows XP system after paged pool had run out. Note how Windows failed to redraw the window’s title bar and the different errors encountered for each attempt:

And here’s the start menu’s Accessories folder failing to populate on a 64-bit Windows Server 2008 system that’s out of paged pool:

The reason that Windows doesn’t simply crash when pool is exhausted, even though the system is unusable, is that pool exhaustion can be a temporary condition caused by an extreme workload peak, after which pool is freed and the system returns to normal operation. When a driver (or the kernel) leaks pool, however, the condition is permanent and identifying the cause of the leak becomes important. That’s where the pool tags described at the beginning of the post come into play.

After identifying the guilty tag in the left column, in this case ‘Leak’, the next step is finding the driver that’s using it. Since the tags are stored in the driver image, you can do that by scanning driver images for the tag in question. The Strings utility from Sysinternals dumps printable strings in the files you specify (that are by default a minimum of three characters in length), and since most device driver images are in the %Systemroot%\System32\Drivers directory, you can open a command prompt, change to that directory and execute “strings * | findstr <tag>”. After you’ve found a match, you can dump the driver’s version information with the Sysinternals Sigcheck utility. Here’s what that process looks like when looking for the driver using “Leak”: 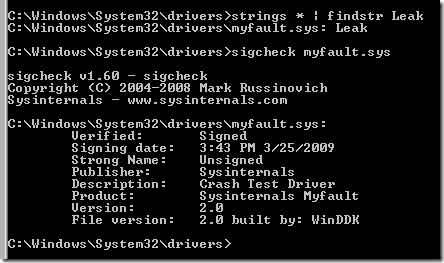 If a system has crashed and you suspect that it’s due to pool exhaustion, load the crash dump file into the Windbg debugger, which is included in the Debugging Tools for Windows package, and use the !vm command to confirm it. Here’s the output of !vm on a system where Notmyfault has exhausted nonpaged pool: 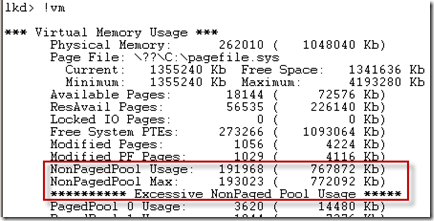 Use Strings on the system where the dump came from to search for the driver using the tag that you find causing the problem.

So far in this blog series I’ve covered the most fundamental limits in Windows, including physical memory, virtual memory, paged and nonpaged pool. Next time I’ll talk about the limits for the number of processes and threads that Windows supports, which are limits that derive from these.