I wish I had the time to write up proper documentation for LUA Buglight , the utility I wrote that identifies admin-rights issues in desktop applications.  LUA Buglight is one of many "spare time" projects I work on, and for the past year and a half or so, it, like pretty much all my other "spare time" projects, has had to take a back seat to my taking over co-authorship of the Sysinternals Administrators Reference , working with Mark Russinovich .  That "spare time" project has also consumed all my vacations.  It's taking a long time because I'm very detail-oriented and am making sure to really get it all right.  You're going to like this book.  (Check out that link -- it references both of the other co-authors who tried and didn't survive.  The third co-author is the charm.)


To start the LUA Buglight Reporter directly but without an initial file, run LuaBuglight.exe with the /Reporter option:


Finally, you can right-click a LUA Buglight report file, choose Open With, and browse to find LuaBuglight.exe.  From that point forward, LuaBuglight.exe will appear on the "Open With" context menu for XML files, as shown here: 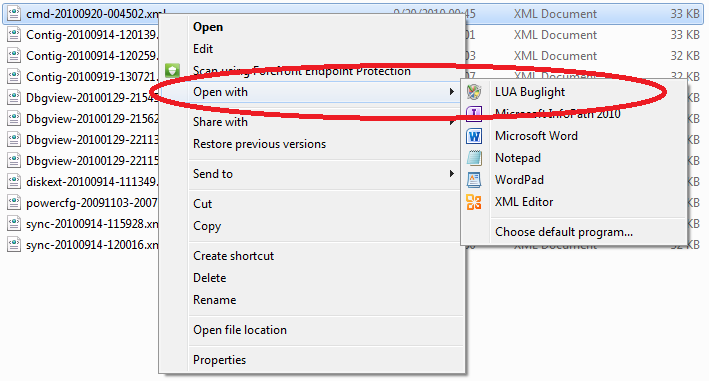 This link: http://blogs.msdn.com/aaron_margosis/pages/LuaBuglight.aspx is not functional. Where can we download this app?