Turn on suggestions
Auto-suggest helps you quickly narrow down your search results by suggesting possible matches as you type.
Showing results for
Show  only  | Search instead for
Did you mean:
Fixing Disk Signature Collisions
By


Disk cloning has become common as IT professionals virtualize physical servers using tools like Sysinternals Disk2vhd and use a master virtual hard disk image as the base for copies created for virtual machine clones. In most cases, you can operate with cloned disk images unaware that they have duplicate disk signatures. However, on the off chance you attach a cloned disk to a Windows system that has a disk with the same signature, you will suffer the consequences of disk signature collision, which renders unbootable any of the disk’s installations of Windows Vista and newer. Reasons for attaching a disk include offline injection of files, offline malware scanning , and - somewhat ironically - repairing a system that won’t boot. This risk of corruption is the reason that I warn in Disk2vhd’s documentation not to attach a VHD produced by Disk2vhd to the system that generated the VHD using the native VHD support added in Windows 7 and Windows Server 2008 R2.

A disk signature is four-byte identifier offset 0x1B8 in a disk’s Master Boot Record , which is written to the first sector of a disk. This screenshot of a disk editor shows that the signature of my development system’s disk is 0xE9EB3AA5 (the value is stored in little-endian format, so the bytes are stored in reverse order): 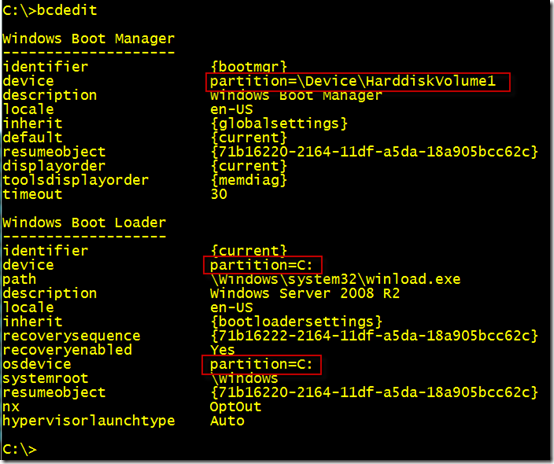 The BCD actually has additional references to the disk signature in alternate boot configurations, like the Windows Recovery Environment, resume from hibernate, and the Windows Memory Diagnostic boot, that don’t show up in the basic Bcdedit output. Fixing a collision requires knowing a little about the BCD structure, which is actually a registry hive file that Windows loads under HKEY_LOCAL_MACHINE\BCD00000: 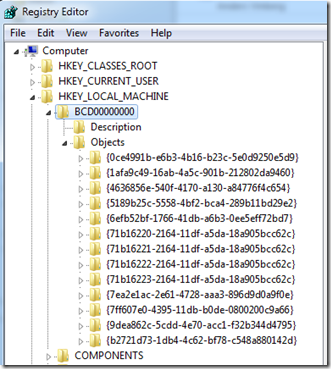 Here’s the element corresponding to one of the entries seen in the Bcdedit output, where you can see the same disk signature that’s stored in my disk’s MBR:

Windows requires the signatures to be unique, so when you attach a disk that has a signature equal to one already attached, Windows keeps the disk in “offline” mode and doesn’t read its partition table or mount its volumes. This screenshot shows how the Windows Disk Management administrative utility presents an offline disk that I caused when I attached the VHD Disk2vhd created for my development system to that system:

If you right-click on the disk, the utility offers an “Online” command that will cause Windows to analyze the disk’s partition table and mount its volumes:

When you chose the Online menu option, Windows will without warning generate a new random disk signature and assign it to the disk by writing it to the MBR. It will then be able to process the MBR and mount the volumes present, but when Windows updates the disk signature, the BCD entries become orphaned, linked with the previous disk signature, not the new one. The boot loader will fail to locate the specified disk and boot files when booting from the disk and give up, reporting the following error: 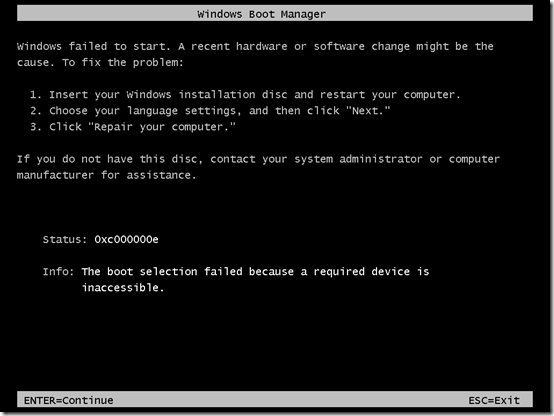 One way to repair a disk signature corruption is to determine the new disk signature Windows assigned to the disk, load the disk’s BCD hive, and manually edit all the registry values that store the old disk signature. That’s laborious and error-prone, however. In some cases, you can use Bcdedit commands to point the device elements at the new disk signature, but that method doesn’t work on attached VHDs and so is unreliable. Fortunately, there’s an easier way. Instead of updating the BCD, you can give the disk its original disk signature back.

First, you have to determine the original signature, which is where knowing a little about the BCD becomes useful. Attach the disk you want to fix to a running Windows system. It will be online and Windows will assign drive letters to the volumes on the disk, since there’s no disk signature collision. Load the BCD off the disk by launching Regedit, selecting HKEY_LOCAL_MACHINE, and choosing Load Hive from the File menu: 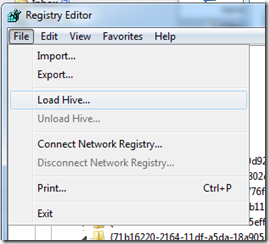 Navigate to the disk’s hidden \Boot directory in the file dialog, which resides in the root directory of one of the disk’s volumes, and select the file named “BCD”. If the disk has multiple volumes, find the Boot directory by just entering x:\boot\bcd, replacing the “x:” with each of the volume’s drive letters in turn. When you’ve found the BCD, pick a name for the key into which it loads, select that key, and search for “Windows Boot Manager”. You’ll find a match under a key named 12000004, like this:

Select the key named 11000001 under the same Elements parent key and note the four-byte disk signature located at offset 0x38 (remember to reverse the order of the bytes).

With the disk signature in hand, open an administrative command prompt window and run Diskpart, the command-line disk management utility. Enter “select disk 2”, replacing “2” with the disk ID that the Disk Management utility shows for the disk. Now you’re ready for the final step, setting the disk signature to its original value with the command “uniqueid disk id=e9eb3aa5”, substituting the ID with the one you saw in the BCD:

When you execute this command, Windows will immediately force the disk and its corresponding volumes offline to avoid a signature collision. Avoid bringing the disk online again or you’ll undo your work. You can now detach the disk and because the disk signature matches the BCD again, Windows installations on the disk will boot successfully. You might find yourself in a situation where you have no choice but to cause a collision and have Windows update a disk signature, but at least now you know how to repair it when you do.

You can find out more about Disk2vhd in the Sysinternals Administrator’s Reference by me and Aaron Margosis.