You can now set the target OS version in Upgrade Analytics

The default target OS in Upgrade Analytics is set to the released version of the Current Branch for Business (CBB). Currently (at the time that this blog was published), it is set to Windows 10 version 1511. The target OS setting is used to evaluate the number of computers that are already on this or a later version of Windows 10. So the number shown under Computers upgraded in the Upgrade Overview blade is the total number of computers that are already running the same or a later version as the target OS setting. It also is used in the evaluation of apps and drivers. The known issues and guidance for the apps and drivers in Upgrade Analytics is based on the set target OS version.

To change the target OS setting, click on Solutions settings , which appears at the top when you open you Upgrade Analytics solution.

On the Upgrade Analytics Settings page, choose one of the options in the drop down box and click or tap on Save . The changes in the target OS setting is reflected in evaluations when a new snapshot is uploaded to your workspace. 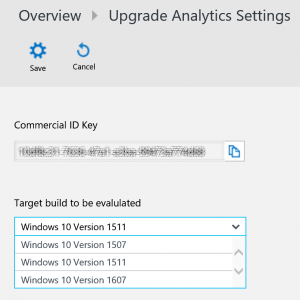