I am MS window user , currently using window 11, also I am developer in a organization, when I am trying to copy multiple file or folders from one location to another location if the files size are larger it is taking much time and you dont have control there to stop copping the file/folder which is larger in size on the fly. We can build this in such a way that we should have full controlled in where we can choose what to cancel and what to go "On the Fly" , this will help user to have control to cancel the file which is taking more time, will do it later.  But currently if you cancel it will cancel all and user has to re-do. 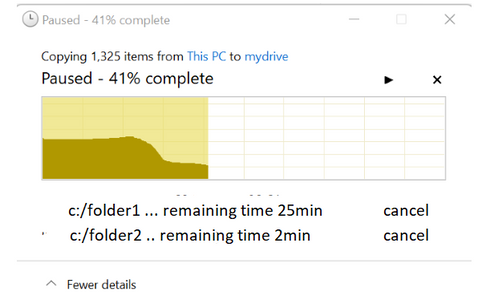 XCOPY with unbuffered I/O is maybe a better choice, but it actually depends more on partition alignment (sector size,) and also your choice of file systems. While NTFS may have the best integrity due to it being a journaling file system, it might not be as fast as exFAT for removable media. It's smarter to look at the tradeoffs, long-term data integrity vs speed, etc, but also partition / sector alignment, as it relates to 512e / Advanced Format drives, and the typical partition that is aligned in an array with other drives that have a sector size of about 4KB.

Sony: You don&#8217;t reeeeaaaally want to uninstall, do you?