November last year I tried to use Windows 11, to figure out if it is time to switch to it. I installed it to a separate SSD. It worked more or less OK.

One day my PC unexpectedly shut down. As I can figure out from BSOD explorer, it is due to this error: 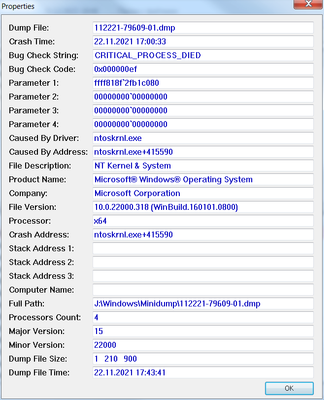 2) Boot from Windows 11 media and tried "Startup repair". It either reboots or shows "Unsuccessful" result. In J:\Windows\System32\LogFiles\Srt\SrtTrail.txt I see that last string is about "Searching LCU" and it ended "Successfully" with the error code 0x14c. Since I seems to have no restore points, that option is also usless. "Uninstall updates" also is unsuccessfull.

3) Boot from Windows 11 media and open command string, and from there:

a) chkdsk /r - no errors on Windows drive.

b) bootrec /scanos - found 0 Windows installations, while I have Windows 7 on my first drive, not to mention Windows 11 that is broken.

c) sfc /scannow - it started some check process, reaches 100% and then says that Windows is protected.

d) UPD dism /image:H:\ /cleanup-image /restorehealth /scratchdir:g:\Scratch (note drive letter change - it depends on where I boot). It is unsuccessfull, and in :\Windows\System32\LogFiles\Srt\DISMRepairLogFile.txt I have some errors like that:

Notably, error code is the same as in c)

4) I also read that error might be due to Bootcat.cache file corrupted and one can delete it to fix that issue, however, I have no such file in %SystemRoot%\system32\codeintegrity

5) Also there was mentions that Registry might be corrupted, and one can restore it from  :\\Windows\System32\config\RegBack\ , however that folder is empty for me.

6) I tried to "Install Windows over", booting from the said media, however it says that this is available only from Windows itself. Since I can't boot to it, it is not an option for me.

Any suggestions would be welcomed. I'll update post once I try something else.