How do I remove "English (United Kingdom)"?

How do I remove "English (United Kingdom)"?

If you're reading this message, it means I have given up or I am close to giving up on this Windows problem. I have a recently installed Windows 10 (build 19043.1110) here on my PC with the following two... languages?... (I will play along and pretend for a minute that I'm a complete idiot and I don't know what constitutes a language or a Windows locale). 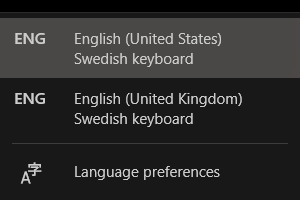 These "languages" are accessible from the system tray. My keyboard is Swedish. Both of these two "languages" are set to use "Swedish keyboard". So if I use the hotkey Win+Space I am merely entertaining myself, it's not doing anything useful, it just switches my keyboard layout from Swedish to Swedish and back to Swedish again.

If I really feel like entertaining myself in this way, I can even do so explicitly using the hotkey Alt+Shift. The "Input Switch Notification" knows this.

"Typing Left Alt + Shift changes your input language. You can turn this feature off or change your hot key [sic] sequence by selecting Customize." 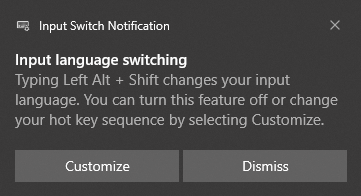 I see it's now called "input languages switching". I know it's a keyboard layout, but OK, I will play along. Still, nothing is changed by any of this if I have two "languages" called "Swedish keyboard"!

So I thought I would make this hot little feature more useful by adding some additional languages so that I can communicate in a few more additional languages instead of being stuck on English with Swedish keyboard. That proved to be most difficult. For starters, Windows never heard of "English (United Kingdom)". The Settings app has no record of it. It only displays "English (United States)". 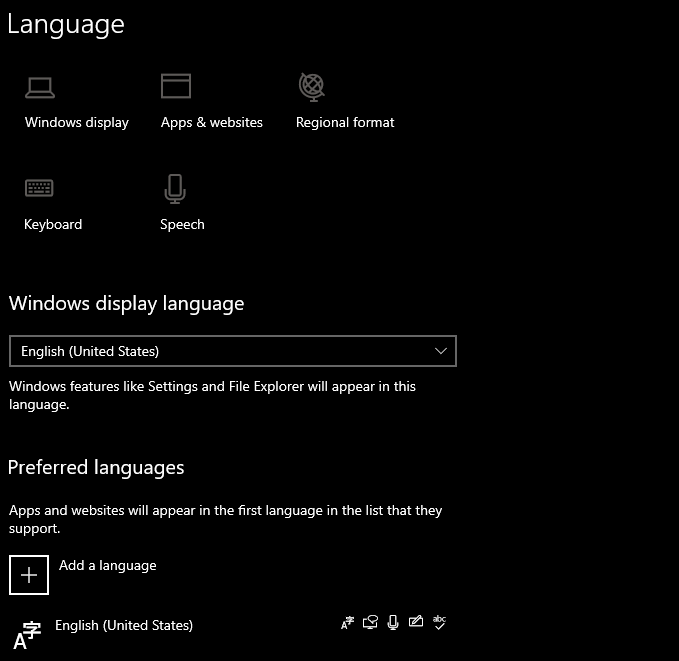 The "preferred languages" language is "English (United States)" and the "Windows display language" is "English (United States)". This is almost OK. I do prefer it when Windows talks English. Unfortunately, this is not English, this is something else. Can you make sense of what Windows is saying here? I can't, and my understanding of English is pretty good if I may say so myself, even though it's not my first language. I can only speculate and make educated guesses on what's going on here.

Windows has always been confusing when it comes to foreign language support for as long as I can remember. Let's not forget the "MUI" packages for Windows and Office that were only reserved for privileged few customers who payed enough money to access these premium features. But here we have Windows 10, failing English, in year 2021. 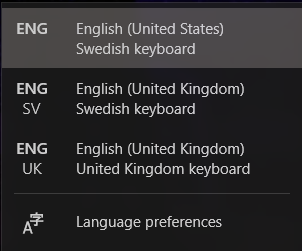 That did give me the privilege (handle) to "Remove" it from the Settings app. But that did not have the effect I was hoping for. I still have this stubborn "English (United Kingdom)" language that won't go away. It does offer me the opportunity to learn British spellings like "colour" and "personalisation" by changing the display language. 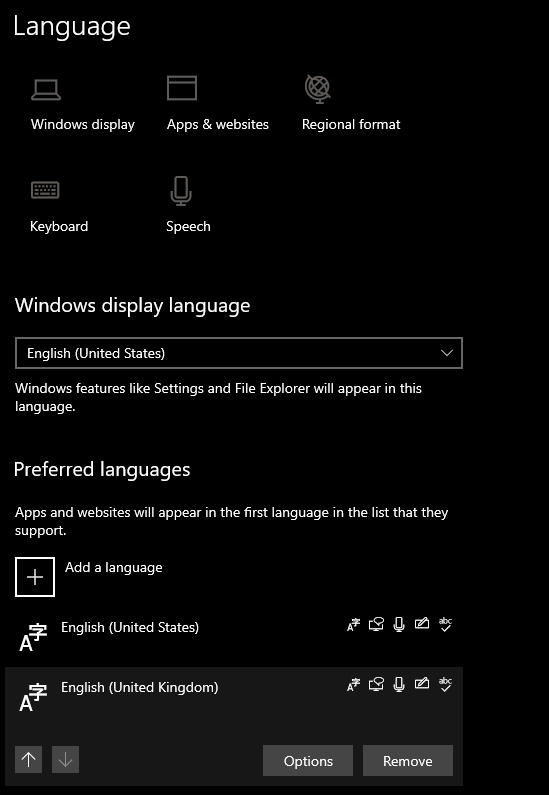 I wish Microsoft would stop trying to "simplify" our lives by calling everything a "language" and bundling numerous locale related settings in single name entities. I may be using a Swedish keyboard, but that doesn't mean I want my Windows to be in Swedish. You don't know how I use my computer, despite your best efforts to find out with your telemetrics. Windows is still Windows, some things are hard to change.

I suspect this may be related to use of Microsoft account for automatic backup and sync of personal preferences. I did use British English at one point in a prior installation of Windows 10.

Help me Internet, you're my only hope...

Open regedit and navigate to this key:
HKEY_LOCAL_MACHINE\SYSTEM\CurrentControlSet\Control\ContentIndex\Language
Export it just in case, then remove English_UK subkey.

Oh no... not the registry... I'm allergic to everything related to Windows registry. As soon as I see mentions of RegEdit and these long registry key names including "CurrentControlSet", I know trouble is awaiting around the corner! LOL :face_with_tears_of_joy:

A corrupted Windows registry is in fact the reason I had to reinstall Windows 10 on this PC. I had not reinstalled Windows on this PC since 2018, and so I finally did it a few days ago. I had not reinstalled Windows for little over 3 years, something of a personal record for me. I posted about this issue earlier. Basically, what happened was Windows Update installed KB5001391 which sent my PC on a BSOD/GSOD roller-coaster, causing sudden power loss, corrupted and auto-"repaired" Windows registry, resulting in a state of "No Audio Output device is installed" which I could not recover from despite my best efforts. I did recover form it using System Restore points two or three times, but Windows Update kept installing KB5001391 repeatedly like a vicious idiot, and kept breaking my Windows installation repeatedly and on purpose, up to the point where I could no longer recover and I lost the good restore point along the way. Thankfully, Microsoft stopped pushing out KB5001391 after people started complaining, myself included, but it was already too late for me. The registry was corrupted beyond repair, so I had to reinstall Windows altogether to get the audio problem sorted out.

I am probably not alone to feel this way about the Windows registry. It's one of the absolutely worst parts of Windows that no one talks about or pays any attention to, or seeks improvement or replacement of in the Feedback Hub app (or any other open forum). A very large portion of Windows issues over the past 20 years has been caused by the Windows registry alone. If you run into a registry issue, you're almost guaranteed to need to reinstall Windows to sort it out, unless you have system image backup. That's why Microsoft has built in so many different recovery mechanisms over the years for rebuilding and repairing registry issues, including System Restore and RegBack (which is officially disabled and deprecated as of Windows 10 version 1803).

In any case, I will have a look at your suggestion Spigolo. I am not able to test it at the moment, but I will test it and report back as soon as I can. Thanks in advance!

If you prefer good ole command prompt, I have you covered :)
From an elevated Prompt type these two commands:

Unfortunately this was not good enough for Windows. I have removed "English_UK" and rebooted.

I also checked the first (001) control set hive where control parameters are stored.

In both of these locations, I only have "English_US" and "Neutral". The "English_UK" key has been removed with success. But I still have "English (United Kingdom)" in system tray as a language option.

I have restored (imported) the Reg file I exported previously (all of ContentIndex). I then tried to do a German switcheroo by adding German language to the mix so I can kick out "English (United Kingdom)". That didn't work, as you can see by the screenshots below. 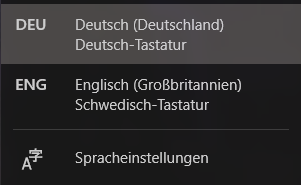 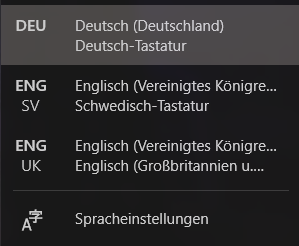 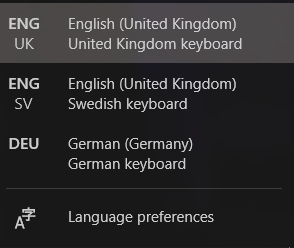 This is hopeless... I'm not reinstalling Windows again.

I guess it inherits the "English (United Kingdom)" by some magical glue. But at least it's shown in the Settings app for this new account. 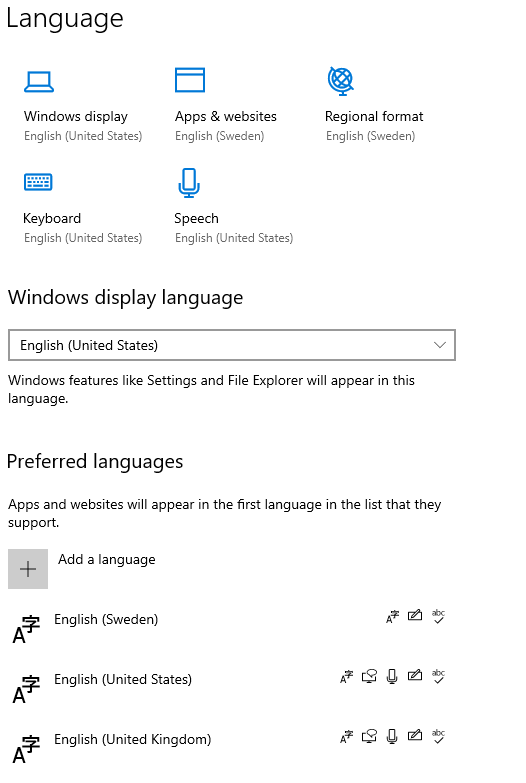 The display language was set to "English (United States)", as expected. 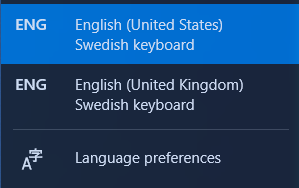 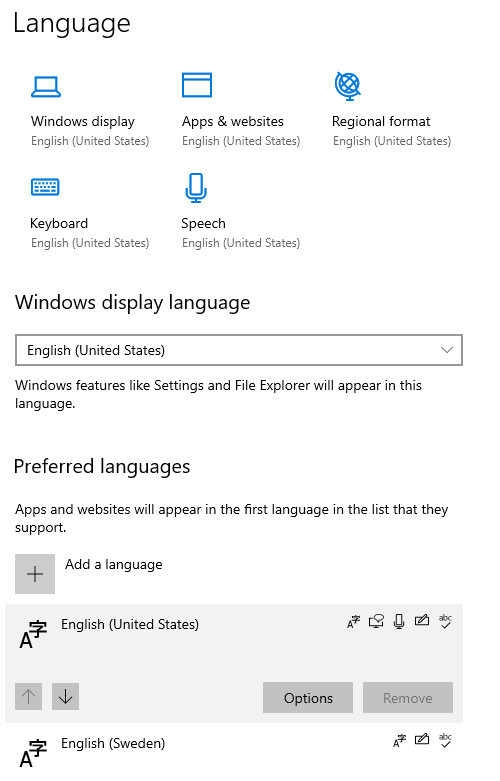 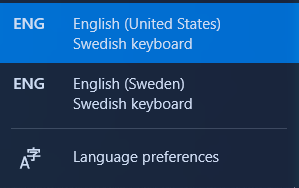 At this point I could just remove "English (Sweden)" and keep only "English (United States)" with Swedish keyboard. This would remove the language selection icon from system tray. Except Swedish spell checking would not work in Windows and across all apps, and I do want to intend support for more languages (UK English is just not one of them, and the reason I wanted to remove it).

The main problem with this "solution" is that this is not my user account. I would like to be able to remove "English (United Kingdom)" equally as easy on my main account as I just did on this test account.

Windows and its languages and locale settings... absolutely horrible! 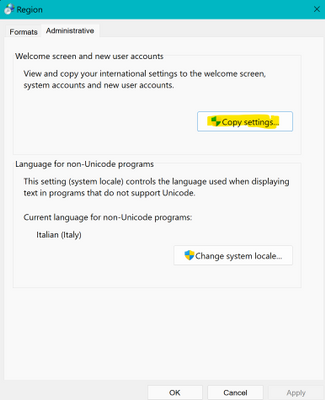 Check both flags under Copy your current settings to and confirm: 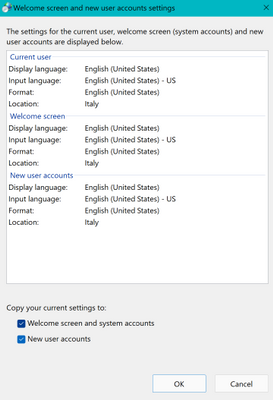 Now restart and create a new local administrator user and login with it.

Check if English UK is still present in language settings.

Sadly, impossible. I did exactly what you said. I checked the two boxes, clicked OK, restarted, and made a new user called "Blabla" and made him administrator without password (danger zone). 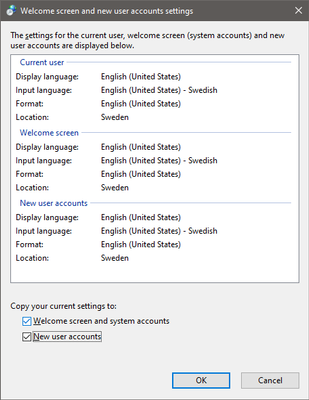 After signing in with Blabla, I get a bit different language configuration than I had previously when I made a new user account. But I still got the "English (United Kingdom)". 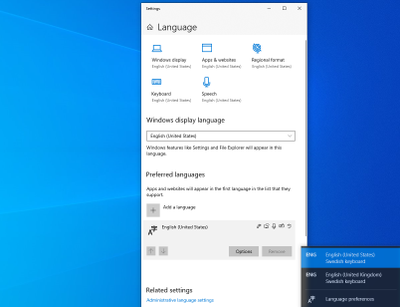 I'm very sorry @SamirGunic but I have no more ideas.

Such setting must be hidden somewhere but not in the usual places.

Clean install or live with this annoyance.

Thanks for helping out Spigolo! You had some interesting ideas. Especially the last idea was very interesting, to see how oddly Windows behaves when you changes those settings. I might pick up where we left off at a later time. But for now, I will give this a rest and live with it. If I had not reinstalled most of my apps already, I would create a new user profile and move over and use that profile instead. But for now at least, I am stuck with this one. Thanks again!
0 Likes
Reply

You could have stumbled upon a bug, so my advice is to submit a feedback to developers. Press Win+F.

Let us know if you will find a working solution.