Quarantined Ninja says, "It's time to launch our new Microsoft Wiki Community Council!" He also says, "It's cool. I always wear a mask and keep my hands clean. Oh, and I throw ninja stars." Anyway...

I'm going to start with the history of the council and the blog (well, this is one perspective on the history... there are a lot of ways to tell this story). But then, keep reading, because this will lead up to today's announcement at the bottom of this blog post!

The TechNet Wiki Community Council started in 2010, to help shape the launch of TechNet Wiki:

Some of the key Microsoft FTE members of the council then included Eric Battalio (Wiki founder), Monica Rush, Tony Soper, Kim Ditto-Ehlert, and Larry Franks. For the full list of all the members, over time, see the following article:

I was a founding member of the TechNet Wiki, but I didn't join the Council until 2013, when I was asked to lead it (Eric Battalio passed the torch as he went on to champion the Visual C++ community). To understand why I was asked to lead it, let's rewind to mid 2011, when I made a second attempt to pitch to the council something crazy... let's use a blog to promote the wiki. The first time, that didn't land well. Why not use the Wiki to promote the Wiki? My short answer was/is... that wasn't my vision, I didn't understand how that would work (still don't), and so I wasn't going to do that.

So I didn't pursue it or anything like it. And then I came back with Yuri in mid 2011 to help me pitch the idea of the blog again. This time, it landed better. And ultimately, I think what it came down to was that this Ed guy wasn't going to run a promotion program unless he could do it his way... thus let's just let Ed try it his way and run the blog. (Something is better than nothing.)

Thus, in 2011, the Wiki Ninjas blog was born, which existed to build a community around TechNet Wiki. The vast majority of the posts existed to talk about what the community was doing... essentially to say Thank You. Our interviews we conducted have helped our members get MVP awards, jobs, and book projects (um, even this week, actually, but I digress)... it's been a powerful 9 years of the Wiki Ninjas!

And through that blog, the community took shape and became the Wiki Ninjas. Before the blog, "Wiki Ninjas" was a fun brand the Microsoft employees called ourselves (courtesy of Eric Battalio) and a Twitter handle (see Wiki Ninjas - Why ninjas?). But it was you, the community, that made the Wiki Ninjas blog and brand come alive! Here are our earliest blog posts, starting on October 30, 2011:

As we got the blog going (in late 2011 and early 2012), I was struggling a little to get Microsoft employees signed up to post on the blog. I was blogging too often to give the blog and community the strength and momentum that it needed. I needed more bloggers.

By the time we hit April/May 2012, we were really rolling. We had lots of community (non-MS) bloggers and we could comfortably rotate in and have fun with it. And we never looked back! The community has grown! Some folks graciously bowed out and stepped out of the way as our new leaders have emerged!

Fast forward to early 2013, and Eric was moving to his Visual C++ community management roll. He wanted someone to carry on the mantle of the Wiki Community Council. Who better than that one crazy guy with the idea that a blog can harness the passion of a community around a wiki?

Over the years, that council has ebbed and flowed. We've been super organized (like the blog post above shows), even meeting monthly. And then other times we were more flexible, continuing our broader goals and running programs as a community, nay a family, in our Skype groups.

There have even been times when I got busy with projects involved in my work (which is now helping drive results in Azure datacenter deployments). And then I would wonder if the Wiki Ninja Community has survived my absence. So I check back and see it thriving! Sure, there are times when the blogging hasn't been as active. And the transition to this blog on Tech Community isn't quite done yet, meaning that we don't yet have the following we had on TechNet/MSDN, but we're getting close. But the point is that this community is much bigger than me, Eric, or any one person (although folks like Peter Laker, Ronen, Kamlesh, and Peter Geelen, have certainly helped keep the lights on in incredibly astonishing ways).

Ronen (RA) stepped up to support a resurgence in the council! I am humbled by his passion and ready to partner with him and the community!

And so, we're digging back in. We're going to go back to full strength (thanks to the help of the Microsoft MVP, Ronen), and you'll see us blogging here about the new progress we're making. 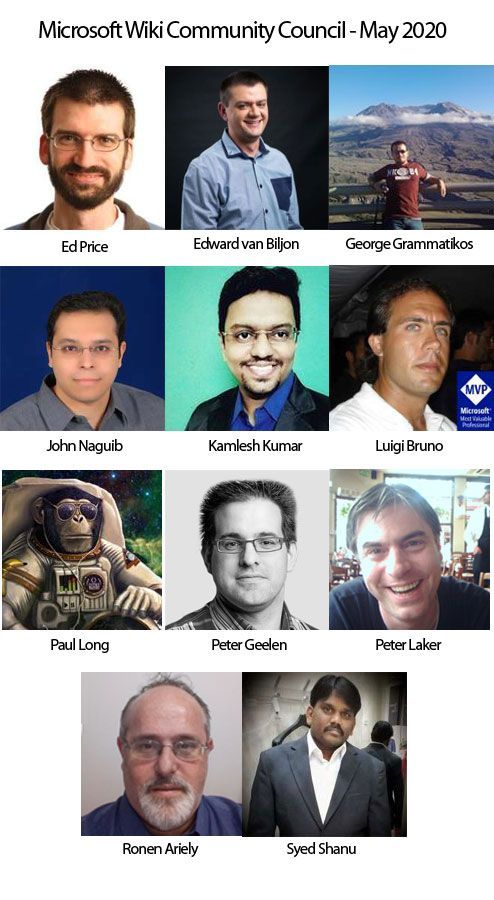 Here are the profiles of the new/returning team members (in alphabetical order):

And then there were 11! We're looking forward to working together and seeing what's next for Microsoft Wiki Community and what we can do together to take our community to the next level!

We're up for adding more members, and we'd love to have women on the council again, so anyone should feel free to chat with us about this! We want the person to be a leader in the Wiki community, so we'd start with that... publishing articles for the Guru Competition, then becoming a member of our blog authoring team, etc.

Expect to see us return to this blog, where we'll tell you about our projects! We'll also be updating the Wiki articles about the new council. You'll see us blog about our focus areas...

And then this article shows our history with various focus areas:

We're looking forward to collaborating with you! Thank you for reading!

And remember to jump on in. The Wiki is warm!

*The Quarantined Ninja banner was created by Mohamed El-Qassas. You can see all the 2020 banners in Ronen's blog post: Microsoft Community Wiki Banners & Logo for 2020 - Contest result!

Thanks @Ed Price for sharing the history and the Announcement on the new council.

I must say, that I didn't knew the full history and it is very interesting to know where it is all came from and who started it in the early steps, of what became my second virtual home and my number one community

Thanks to the retired members of the council for years of hard work and awesome contribution to the technical community. Well done guys.

And good luck to the new council

Welcome back to all of us!

UPDATE: I added the image of the council members and links to our profiles. Special thanks to Ronen for his help with that!

Oh... nice. The images add color to the page

It is quite interesting to read about the Technet Wiki community council.

Thank you for sharing with us Ed

Kamlesh Kumar
Occasional Contributor
It's an honor for me to be part of Microsoft Wiki team and serve our technical community. Thank you @Ed Price for sharing this and welcome back to all of us.
1 Like
Like

I just added our countries, to show how we're an international team. Interestingly, we're all from different countries (so far)! I don't think that will last, but it isn't intentional. It's just a sign of how international our community leadership is!

Thanks a lot @Ed Price  and thanks all

Hi @Ed Price  Thank you for publishing this.

>> I just added our countries, to show how we're an international team.