AutoConnect was a feature first introduced in Visio 2007. The original intent of the feature was to simplify the creation of connected diagrams such as business process flowcharts by accomplishing multiple tasks in a single action:

1. Dropping a new shape on the page.

2. Connecting the new shape to the original shape.

3. Aligning and spacing the new shape attractively with other shapes in the diagram.

The notable efficiency is that AutoConnect accomplishes these tasks without the need to switch to the Connector tool (and subsequently back to the Pointer tool).

In Visio 2010 we have extended AutoConnect to make the creation of connected diagrams even more efficient. Here’s a summary of the new features.

Adding a new connected shape from a stencil’s Quick Shapes

In many ways, AutoConnect’s core ability of adding new connected shapes works much the same as it did in Visio 2007 – with one very significant enhancement in Visio 2010. AutoConnect now allows you to choose from up to four Quick Shapes from the current stencil as the added shape.

Note: Quick Shapes represent a subset of shapes that are more commonly used within a given stencil. For more information on the new Quick Shapes feature in Visio 2010, see the earlier blog post concerning the new enhancements to the Shapes Window. 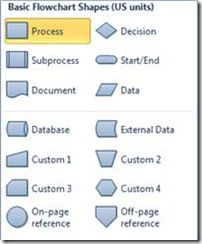 In the image above, when hovering over the AutoConnect arrow to the right of shape #1, a Mini Toolbar appears that contains the first four shapes from the Quick Shapes area of the active stencil in the Shapes window. As you point to a shape on the Mini Toolbar, a live preview of the shape and the connector is shown on the page. Clicking on the shape adds it to the page, connected, aligned, and spaced.

Connecting to another shape in the diagram

As you create and edit connected diagrams, very often the need is to connect one shape to another already on the drawing page. AutoConnect can simplify this task in a couple ways. 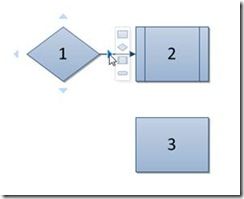 In the image above, AutoConnect automatically previews a connector between the original shape (#1) and a neighboring shape (#2) when hovering over the AutoConnect arrow. Clicking on the arrow completes the connection. The neighbor connect feature looks for a shape in close proximity in the direction of the respective AutoConnect arrow. (Note: The neighbor connect feature was not functional in the Tech Preview of Visio 2010 but will be fixed in the Visio 2010 Beta.)

But what if the intent is to connect shape #1 to shape #3? In Visio 2010 this can now be accomplished by simply dragging a new connector from any AutoConnect arrow.

In the sequence above, after hovering over the AutoConnect arrow to the right of shape #1, a connector is dragged to the target shape #3. The connector can be glued dynamically to shape #3 as shown or to a particular connection point if desired. Although the behavior while dragging is identical to that of the Connector tool, the important distinction is that switching to the Connector tool was not required and further diagram editing can continue with the Pointer tool.

As always, we're interested in your feedback on the enhancements we’ve made to AutoConnect, so use the Send a Smile feedback tool or comment on the blog to let us know what you think.