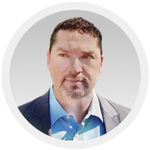 Organizations with hybrid cloud/on-premises environments also typically run an on-prem Active Directory.  It is important to note that ControlSuite utilizes these on-prem AD systems for authentication. Therefore, customers implementing the Universal Print connector to print to legacy devices will also need to configure Azure AD Connect to synchronize between the Azure AD and on-premises AD systems. This will ensure documents are identified with the appropriate user. After synchronization between AD systems has been configured, ControlSuite installation and configuration is exactly the same as for organizations who have not yet migrated to Universal Print.

After the initial launch of  Universal Print, device manufacturers will begin releasing new devices that natively support the Universal Print platform without needing the proxy connector and may even offer firmware updates for existing devices. The shift to native Universal Print functionality will also allow third party vendors like Kofax to enable their products to manage devices through Microsoft Graph API connectivity, thereby reducing or even eliminating the need for on-premises print servers—realizing an even more tightly integrated and seamless user and administrator experience. Kofax looks forward to continuing the journey with Microsoft as the market continues the adoption of Universal Print. Learn more about ControlSuite at Kofax.com/controlsuite.