Hi, I have a chatbot that uses MS Teams channel and supports files sharing, I'm facing some issues when the user try to upload a new file that has the same file name of an older upload. Example, if the user have an interaction with the bot and uploads the file "Capture.PNG" (default name using snipping tool). Then in a second interaction the user try to upload a new file that have the same name (user used again snipping tool and didn't changed the default name), it doesn't load, I realized that this is because the file is persisted in the chat and MS Teams detect that not allowing the user to upload it again.

This is an issue because we want to allow the user to upload any file at any moment they are interacting with the bot no matter if the same filename was used. As the example above lot of users don't change the default name when using the snipping tool, which causes many confusions on end users making them feel that the chatbot doesn't work...

Is there any way to change this configuration on a specific MS Teams bot? disabling the retention of files for example, or just allowing them to use the same filename several times?

Please note that this happens only if the user choose "Upload from my computer", if they choose "OneDrive" it works fine allowing the user to upload the same file multiple times

@Victor_Monsalve- We are looking into this I will get back to you soon.
1 Like
Reply
best response confirmed by Victor_Monsalve (New Contributor)

@Victor_Monsalve -We are tried to repro the scenario, when i try to upload the image with same name getting the warning are as follow:- 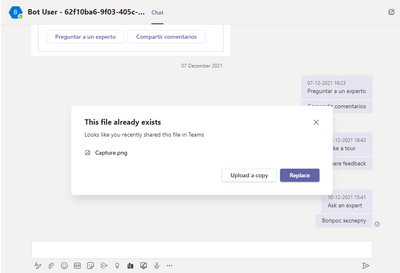 Could you please check it once?

Let us know if you have any query.

Based on your screenshot I assume this will be fixed once we upgrade the tool internally,

I will communicate that,

Thanks so much for your support!