Hey folks, we recently had a bug come through to us via Connect informing us of a Positional Memory Issue in Service Manager. The issue was originally reported by one of our customers and impacts all 2012 versions of Service Manager.

Josh Perez and Jeffrey Fanjoy from our support team, being the awesome SM detectives they are, did some investigation on the issue and here’s what they relayed to us.


Customer has SCSM 2012 installed on a laptop. He connects his laptop to a 2nd display, the console memorizes the way the display exists and defaults its screens to open on the new extended display.


Customer now detaches his second screen, shuts down, and goes about his business.


The next time the customer runs SCSM on this laptop, the console will continue to try to open the Activities Form Window in the extended display that no longer exists.


Service Manger keeps the Windows’ locations in registry, but when restoring it does not take into account the possibility that the Windows’ locations may no longer be valid. Additionally, the registry keys specifically for the Activity’s form position does not reset upon detaching the extended display causing certain forms to not show.


The registry keys in question here reside under HKEY_CURRENT_USER\Software\Microsoft\System Center\2010\Service Manager\Console . If you run into this issue, you can reset the window location by following these steps:


The forms should now render on the primary connected display. 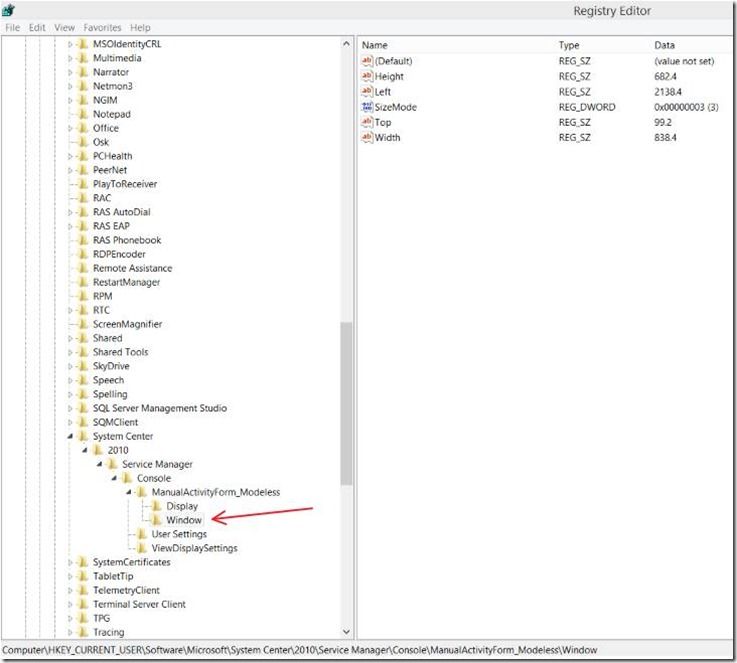 BTW, we’re lining up this bug for investigation in one of the coming URs. In the meanwhile, this workaround should help keep things moving along :)