Right before the Microsoft Management Summit 2012 I was preparing my demo environment for a session.  During the preparation I encountered some problems on one of the  demo hosts.  The troubled  host was in a “Needs Attention” status , but the host status properties appeared Green.   So, I got out the VMMCA to see if the tool could detect any issues that were easy to resolve.

I Installed the MBCA 2.0 engine, then installed the VMMCA model.  I loaded the model and entered the host name and VMMCA reported 3 issues.

The first issue reported informed me to set the execution policy to enable VMMCA to scan a remote machine.  I enabled the remote execution and then rescanned.  The next issue found was that ICMP echo was not enabled on my host. The VMMCA gave me the exact command line to run.  I ran this on my host and immediately my host went into a “Ok” status.  Once in “Ok” status  the refresher completed successfully.   Below is the output of rule checks that completed successfully once I made the change. 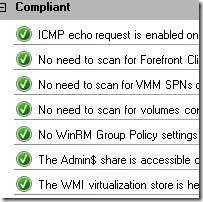 The third issue discovered was a list of patches required for System Center 2012 – VMM  to run optimally.   The list of hot fixes come directly as a result of cases solved by Microsoft Support to enable customer to help themselves using the benefit of actual solved cases with the list of fixes. 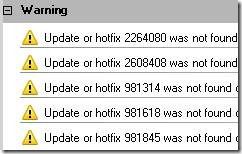 Since I use the new Update Management feature in VMM to update my fabric hosts I created a Baseline that included all updates for hosts and VMM infrastructure servers.

I added the following updates that were available from MU into my baseline. This included the VMM 2012 updates, plus the one update available from MU for the host.  As time goes on I will add more updates to this baseline to ensure my environment is kept updated for optimal performance and operation.

I scanned the host and the compliance status came back with a number of critical, security, and VMMCA required hotfixes found in VMMCA.  I remediated the VMM Fabric Updates and the Critical Updates on the host.  Now my environment is running optimally and that was ensure by the best practice tool analyzer.

A special note: Some of the fixes recommended  by the BPA are not available on Windows Update and are in a format where they can not be injected into WSUS.  For those fixes manual remediation on the host is required.  I thought this was worth mentioning as some you will notice that if you utilize this solution.

In summary, the next time you have an issue with System Center 2012- Virtual Machine Manager utilize the VMMCA as your first line of troubleshooting.