An update to Update Rollup 1 for System Center 2012 has been released.  In addition to the previous fixes for Virtual Machine Manager (VMM) and App Controller (AC), the update rollup now includes fixes for Operations Manager (OM).

1) What we used to call ‘Cumulative Updates’ (CU) are now called ‘Update Rollups’ (UR).

2) We will release Update Rollups for the entire suite not individual components as we have in the past.  Not every component will have something to release in each Update Rollup.

3) The UR 1 was originally released a couple of weeks ago.  This is an update to the UR that now includes some fixes for SCOM.

You can find out more about what is in Update Rollup 1 and get details on how to download and install it here:

The VMM and App Controller updates are available via Microsoft Update.

Below is a snapshot of the VMM and App Controller updates on Microsoft Update. 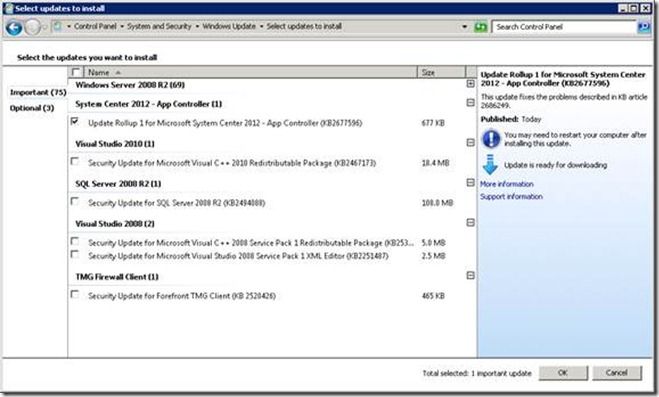