Turn on suggestions
Auto-suggest helps you quickly narrow down your search results by suggesting possible matches as you type.
Showing results for
Show  only  | Search instead for
Did you mean:
The System Center Platform in Service Manager Part 5: The Management Configuration Service
By


This post is a continuation in the series which describes the System Center common platform components implemented in Service Manager.  Previous posts:


The System Center Platform in Service Manager Part 2: The Model-Based Database - Try It!


The instructions the Configuration service provide to the Management service are in the form of what we generically call “workflows”.  These workflows can be Rules, Tasks, Monitors (not applicable to Service Manager), or Discoveries.  Each of these workflows is comprised of series of reusable modules which can be combined together to form different workflows.


The most common kind of workflow in Service Manager is a Rule.  Connectors, process workflows, and other automated portions of the common platform such as the MP Sync process between Service Manager and the Data Warehouse are all implemented as Rules.  For those of you experienced with Operations Manager or System Center Essentials, this will all be familiar.  It’s all the same infrastructure.


Where to Do It


Each workflow in the system has a “Target” class which indicates where the workflow should run.  In Operations Manager, a Rule could be targeted at something like the ‘SQL Server Database’ class.  This would mean that the Rule would run once for each discovered database.  For example, if an Operations Manager agent discovered 3 databases on the computer on which it was installed, three instances of the Rule targeted at the ‘SQL Server Database’ class would be running.


In Beta 2 of Service Manager we will be introducing the concept of multiple Management Servers which will each have a Configuration Service and a Management Service.  When we release Beta 2, I’ll come back to this post and update it with more information about how targeting works when multiple management servers are involved.


When to Do It


Tasks are typically initiated by the user on demand from the console, so the Configuration service will hand the Task workflow to the Management service along with the configuration for running the task that particular time and say “Do it now!”


The Configuration service in Service Manager is extremely important to the functioning of Service Manager, but it is also something you should never need to worry about.  You don’t need to configure it, back it up, or otherwise maintain it.  It should always be running, but other than that you shouldn’t need to think twice about it.  Just think of it as the boss of the Management service.


Here is a new version of the Architecture diagram with the Management Configuration Service in place (click to view full size). 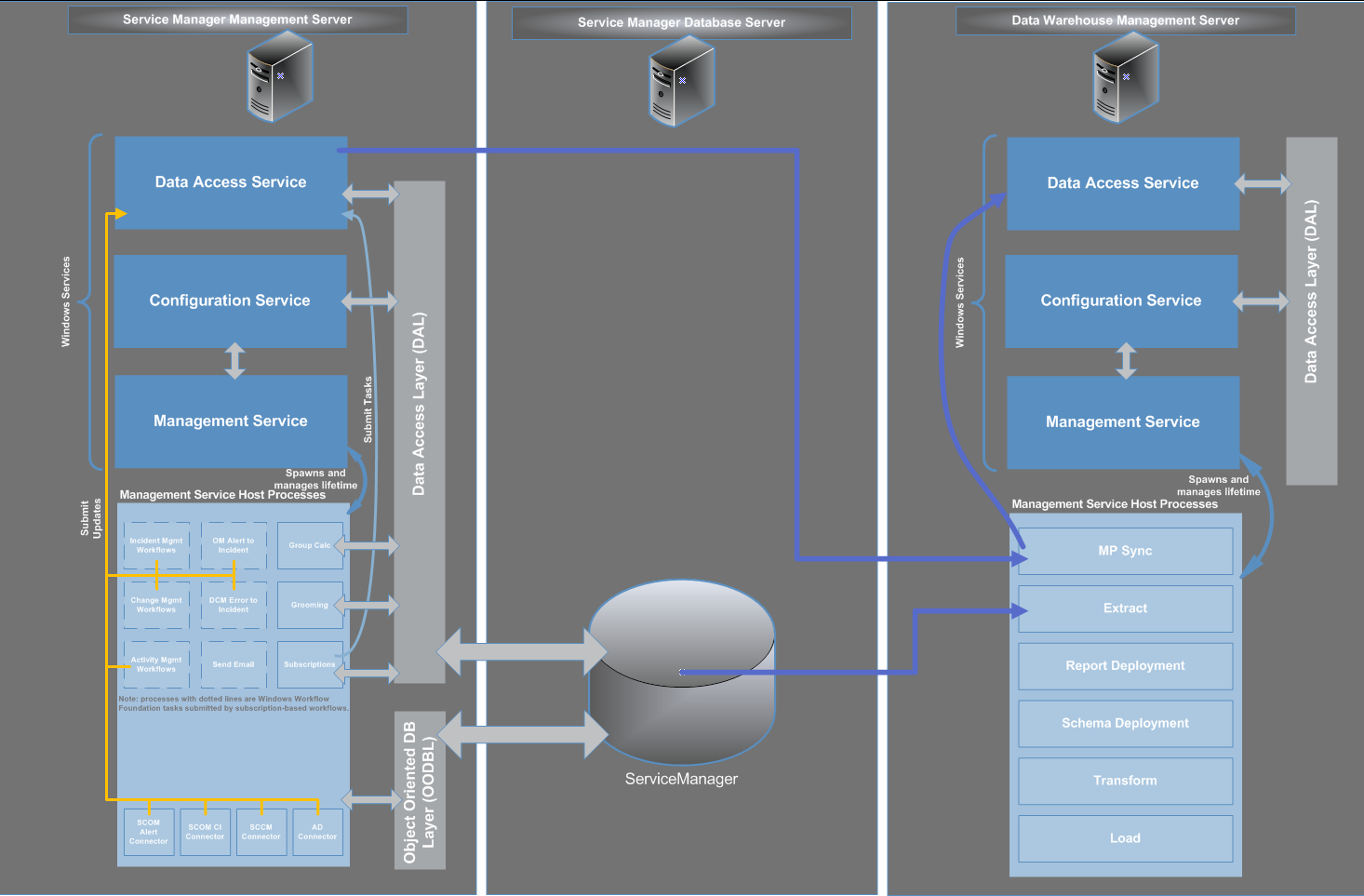