Ok, I spared you the “SQL Sequel” puns this time, but this article does contain some SQL…In this article, I’m again going to talk about actually removing data, so here goes the big scary warning box:

Here’s the scenario… you had a server where you deployed a Runbook Designer and Runbook Server. This server (named “OLD-SERVER” in this example) is no longer accessible. It died, was taken offline and sent to recycling. There is absolutely no way you can get onto that server using Deployment Manager and uninstall the components. Yet the server still appears in Deployment Manager’s list of Runbook Designers and Runbook Servers: 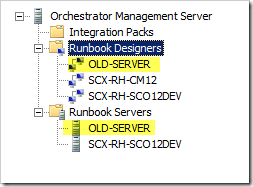 So what do you do? You don’t want to have to see this server forever, and there isn’t any automatic removal mechanism for these kinds of things (remember, we don’t like to automatically remove your data). As it happens, this information is easily removed with a couple of SQL queries. First you need to understand where the Deployment manager gets the list of computers that it displays.

Knowing this and the correct column names that indicate the server name you need to remove, you just run these two SQL scripts:

After I run these scripts, I just refresh the two nodes in the Deployment Manager and I can see the computers are gone! 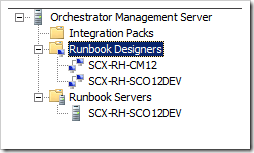 So what happens if you accidentally delete an active Runbook Designer or Runbook Server? Are those machines now in some weird state where they can’t connect and need to be reinstalled? Luckily, no.

In the case of the Runbook Server, you’ll need to restart the Orchestrator Runbook Server service, and that will recreate the database entry for that component.

Now you know how to clean out old machines you can’t access anymore, and you know a little more about the inner workings of Orchestrator. Until next time!