This is the third post in a series of posts detailing the capabilities of OLAP cubes in the Data Warehouse, a new feature that enables self-service reporting functionality added in SCSM 2012.

Modeling the OLAP Cube in a Management Pack

The SystemCenterCube element defines the OLAP cube to a varying degree of detail depending on the user's specific needs. This element contains the following subelements:

The example below illustrates the MP element for the IncidentAssignedToUser measure group.

When the cube is deployed, the dimension, outriggers, and foreign key relationships are automatically calculated and the DSV will be updated with these new elements.

Since Relationship Facts in the Data Warehouse may target abstract relationships and dimensions, the need exists to allow the user to substitute in concrete dimensions so the measure group will contain only instances of the specific instances that they desire to browse.

This is illustrated in the example below:

In this example, the “IncidentAssignedToUser” measure group points at the “WorkitemAssignedToUser” relationship. This relationship, however, will not only contain incidents but will also contain change requests and problems that have also been assigned to any users. To ensure this measure group only contains incidents, we substitute “WorkItemDim” with “IncidentDim”. What this essentially means under the covers is that the table created in the DSV for this measure group will automatically perform an inner join on WorkItemDim with IncidentDim and return only those instances where a join is valid based on the EntityDimKey or BaseManagedEntityId.

Note that the user must define the relationship endpoint where they want to perform the substitution. This element is required because it is possible that the source and endpoint dimensions are identical and we need a methodology to unique identify which dimension to substitute. An example of such a relationship is “WorkItemRelates to WorkItem”.

In this example, the role playing cube dimension name is “AssignedToUserDim”. This is the name of the dimension that will be used to actually filter on this cube. By allowing users to define role playing names, names can be specifically tailored to enable desired many to many relationships in the cube which will allow more advanced filtering and analytical capabilities.

Finally, substitutions are valid not only for relationship facts but custom facts as well. In this scenario, the relationship endpoint would be set to “None” .

Custom MDX (Multi-Dimensional Expression) scripts allow the user to modify and tailor the cube to the exact specifications to meet their precise needs. Since SCSM cubes are model-based, it is impossible to ascertain all the possible semantic needs of the user when taking into account the wide spectrum of requirements and exact specifications for the domain specific business needs of a particular user. Custom MDX allows the user to define MDX scripts that will be applied on top of the cube to light up the specific scenarios they need to measure and instrument.

Named calculations allow the user to define new attributes on a dimension that a custom measure can later target. This allows the end user to essentially extend the dimensional schema and customize the schema to fit their exact needs. Let us look an example from the SystemCenterWorkItemsCube.

In this example, the Incident Dimension contains data such as the status of the incident and the target resolution time. However, no native measure to calculate the number of incidents that did not meet their target resolution time exists. This data is very useful for a systems administrator. We can enumerate the desired scenario using a named calculation and aggregate the data so a custom measure my target the new attribute and bubble up this information to the end user.

Note that NamedCalculation support at this time is only targeted at dimensions . No support currently exists for facts.

The sub-element <Calculation> contains as its value the definition of the named calculation as a MDX expression.

Custom measures allow the user to aggregate and display data based on numeric attributes from dimensions. At this time, no support for custom measure based on facts exist. Continuing our example from the Named Calculation above, we define a custom measure on IncidentsPastTargetResolutionTime:

Looking at the xml above, the target of the measure is the IncidentDimension and the specific property is “IncidentsPastTargetResolutionTime”. This is the custom property that was defined in the Named Calculation above. Custom Measures may target either native or calculated properties in the dimension.

Finally, the measure type is defined to be a sum. Possible values for a measure type include Sum and Count. At this time because of performance considerations, Distinct Count measure types are not allowed.

The ManyToManyRelationship allows the cube designer to add custom many-to-many dimensions to the cube, enabling advanced analytic scenarios. Defining many-to-many relationships is out of the scope of this blog post, but the user is strongly encouraged to read and understand about this relatively new concept and its many benefits. The following link is very helpful for introducing these concepts to a novice user: The Many-To-Many Revolution

Key Performance Indicators (KPI's) allow businesses the quickly estimate the health of an enterprise by measuring its progress toward a predefined goal. Each KPI has a target value and an actual value. The target value is a quantitative goal critical to the success of the organization. Large amounts of data are basically filtered down to one discrete value that can be used to monitor performance and progress towards goals and benchmarks. An example of a KPI is a college having a goal that 90% of their students graduate within 4 years, or a basketball team with a targeted goal of causing the opponent to shoot less than 50% for a game. A scorecard can be used to show a group of KPIs, providing in one instantaneous snapshot the overall health of a business. An example is shown below:

An example of the Gauge status graphic is illustrated below depicting the percentage of change requests which were completed on-time: 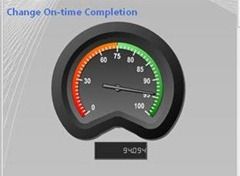 Actions are events that a user can trigger on a OLAP cube when accessing data within the cube. For SCSM 2012, only drill through actions are supported. An example is shown below:

The primary motivation for the CubeExtension element was to enable the user to modify the cube after the cube has deployed onto Analysis Services without having to uninstall and reinstall the cube. In scenarios where the cube has been fully processed with years of data, recreating the cube is a very expensive operation since all partitions have to be fully reprocessed.

The CubeExtension element can define the following elements: