Turn on suggestions
Auto-suggest helps you quickly narrow down your search results by suggesting possible matches as you type.
Showing results for
Show  only  | Search instead for
Did you mean:
Modeling: Deriving and Extending Classes
By


Modeling in the System Center common platform involves defining new classes, properties on those classes, and relationships between those classes.  In a previous post , I showed you how to define a new derived class in a management pack to extend the Service Manager database.  In this post, I’ll describe the difference between deriving a new class from an existing class and extending an existing class.  Class extension is a new feature in the 1.1 version of the management pack schema and infrastructure which ships with Service Manager 2010.  It will also be available in the future releases of Operations Manager and System Center Essentials that come after this calendar year.


Let’s work with a concrete example - the Incident class.  The model of Incident looks like this: 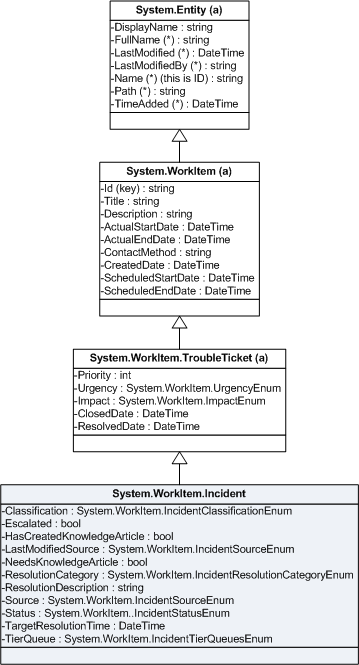 Please note: this is a snapshot of the model at the point in time that I wrote this blog article.  It may not necessarily represent what is in Beta 1 or what will finally be released.


There are several kinds of incidents in Service Manager as indicated in this diagram: 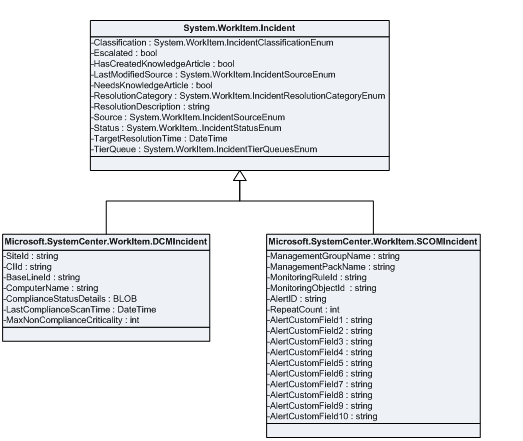 As you go down an inheritance hierarchy you get more and more specific in describing what you are talking about.  We also call this specialization .


The way you declare a new class in MP XML that inherits from another class is like this:

The Base attribute indicates which class you are deriving from.


Now, let’s say that you wanted to track a new property about incidents such as the amount of time worked on the incident.   Let’s also assume you want to track this property for all kinds of incidents – regular incidents, SCOM incident, SCCM DCM incidents, and any other future kinds of incidents which may be derived from incident.  Since Microsoft shipped the System.WorkItem.Incident class in a sealed MP nobody can change it directly to add any new properties.  However, now with the 1.1 version of the MP schema and infrastructure, you can extend sealed MP classes to add new properties by defining a class extension in a different MP that references the sealed MP that contains the class you want to extend. 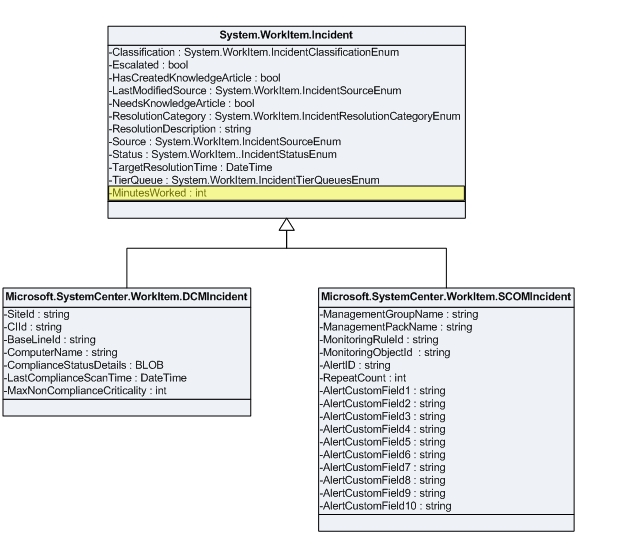 There is one other important thing to note here.  Typically the classes that you want to extend will be contained in sealed management packs.  In this case, you can only extend those classes which are marked as Accessibility="Public".  Classes which are marked Accessibility="Internal"  may only be extended within the same MP (and I have no idea why you would do that :) ).  Most importantly, when you extend a class you need to create a reference in the Manifest section of the MP that contains the class extension which points to the MP that contains the class you are extending.  In the example, above you can see that Base="IncidentLibrary!System.WorkItem.Incident" uses an MP reference which is aliased as “IncidentLibrary”.  An MP alias is the part before the exclamation point in MP reference syntax.  You can create a MP reference in your MP like this:


Once your extension MP is imported the database schema will be extended automtaically to create a new table for your extended class:

And the view that returns incidents from the database will be automatically updated to return this additional extended property: 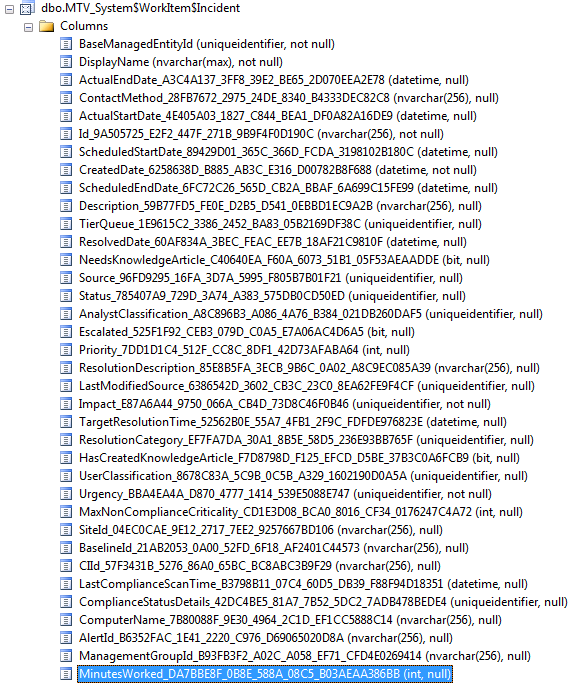 So – the complete MP that extends the System.WorkItem.Incident class with a new property for MinutesWorked looks like this:


Remember, if all of this XML seems a bit intimidating to you, we will be providing a Management Pack authoring tool that will make all of this very easy to do - no XML writing required.