Ever since Windows Phone 7 was launched late last year there’s been a growing buzz surrounding Microsoft’s new phone OS, and with the recent announcement that the Windows Phone Marketplace had surpassed 10,000 apps in those 4-5 months and was growing fast (now well over 12,000 ) I took a look said “Hey, why not me too.”  And with that The System Center Blog Aggregator was born.

So why make an app that simply feeds the System Center blog content to your phone when any old newsreader can be made to do the same?  Well, I had a couple reasons.  First, feedback suggested that many of our readers are IT pros who specialize in System Center and don’t necessarily follow a lot of other sites on a regular basis so they have no need to load up and configure a full blown newsreader just to stay up on our content.  In addition to that, I was curious how the process worked and how hard it would be to create an app and get it published.  Even though I work for Microsoft, the whole process was kind of a mystery to me.

Then a couple weeks ago I saw that AppMakr (no affiliation) announced their support for Windows Phone and I knew I could use that to easily whip up a cool content aggregator that customers as well as other Microsoft employees out in the field could use to keep up with the latest in the world of System Center.  So long story short, a mere 48 hours later I had my app completed, tested, certified by Microsoft and published in the Marketplace.

Here are a couple screen shots to give you an idea of what it looks like.  After you load and start The System Center Blog Aggregator you see the main screen that has our blogs listed in alphabetical order: 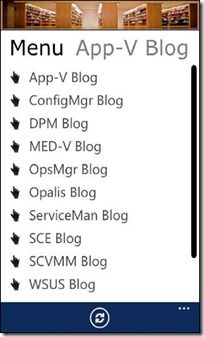 From there you simply select the blog you’re interested in and all the latest posts are viewable: 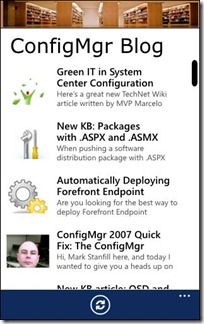 From there you can select and read any post you like.  So there you have it, an app that allows you to follow our content quickly and easily right on your snazzy new Windows Phone.  If you have a WinPhone you should load up The System Center Blog Aggregator and check it out.  It’s free after all so what do you have to lose?  The Zune link is http://social.zune.net/redirect?type=phoneApp&id=fe9b6ff1-8355-e011-854c-00237de2db9e but if you want to load it directly from your phone just search on “System Center” in the Marketplace and you’ll find it.

Oh, and what about other platforms besides Windows Phone?  I should have a version for Android some time next week and as soon as it’s available I’ll let you know.  As of now I don’t really have any plans on doing an iOS version due to the costs but if it turns out there’s any kind of demand for it I’ll definitely revisit it later on down the road.