Turn on suggestions
Auto-suggest helps you quickly narrow down your search results by suggesting possible matches as you type.
Showing results for
Show  only  | Search instead for
Did you mean:
It's time for UR6
By

It's time for UR6


[Update] The Update Rollup 6 for Service Manager 2012 R2 is now available for download at http://www.microsoft.com/en-in/download/details.aspx?id=46834


This update is scheduled to be available on the Download Center on 28th of April, and is containing features and improvements spanning a wide array of areas including the support for new SQL server, connector performance, MPSync and many more.


With this update rollup, we are officially announcing the support of Microsoft SQL Server 2014 for our Service Manager 2012 R2 customers. This has been a common ask from our customers in recent past and we are now obeying it with this quarter's release.


One feedback which we have been getting continuously from SM community is regarding the slow performance of Service Manager. We would like to assure you all, that our efforts in this direction have taken precedence  and we are steadily working to offer a neat and nimble experience for all Service Manager users. In this update, we have addressed performance issues with our two most widely used connectors, viz. AD connector & SCCM connector. Update Rollup 6 contains several optimizations which will significantly reduce the data sync time for both of these connectors. Reduction in time means that now you can sync your data more often and will also help in reducing load on workflow server. You can read more about these enhancements from here . 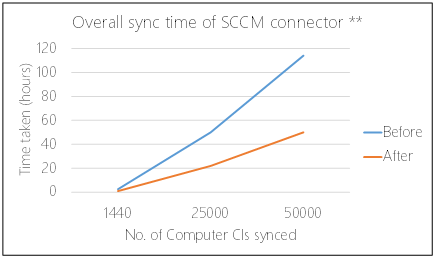 ** In our internal testing, we have observed ~ 50% improvements for SCCM connector & ~35% improvement for AD connector sync time.


Furthermore with UR6, we are now also providing a functionality to configure AD connector sync schedules. This will help the IT admins in better planning of load on workflow server by scheduling AD connector sync cycles outside of work hours, which eventually can help in improving performance during heavy use hours. Admins can adjust the schedules via Console UI as well as with PowerShell cmdlets. You can read more about this from following links- 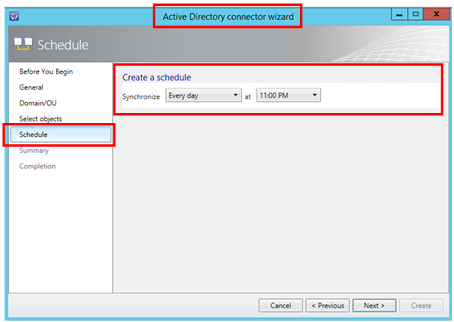 This update rollup also mends two broken scenarios in AD connector which toll the performance of workflow servers. AD connector is expected  to sync only that data, which has got changed since the last run, but with the current behavior, the AD connector performs complete sync again after any DC failover. This problem has got addressed in this rollup and going forward, the AD connector will have a delta sync in case of DC failover also. The second broken behavior which we have fixed is that, the Group expansion workflow of an AD connector runs even if the corresponding connector is disabled. This issue has also got fixed in UR6 and now should prevent unnecessary cycles of resource intensive group expansion workflows.


On the similar lines of performance lags, deleting  SCCM connector was notorious for freezing the console until all the associated configuration items are removed. UR6 is going to fill this gap, and going further the console will not hang in this situation, and the UI will remain in usable state while the deletion of connector is busy in cleaning it's footprint.


In addition to the performance issues, the other area which has grabbed our attention is MPSync job of SM Data warehouse. We have got many customer complaints describing frequent failures & hung state of MPSync  job. Improving stability of MPSync is among our top priorities, and with this update, we are fixing a common scenario for MPSync failures. Management Pack upgrade is not supported for all type of changes, hence many a times the admin has to re-import the new version of MP after removing the existing one, and admins often face MPSync issues after this. This update is carrying the fixes for preventing MPSync issues in this common scenario.


The story of UR6 doesn’t end here, there is a lot more coming with it. All the major improvements mentioned above are accompanying a long list of bug fixes to make life easier. Following are bugs which have got fixed in this update -


This mammoth update rollup will soon be available for download, and meanwhile feel free to use the comment section to share your feedback and suggestions. We are looking forward to hear your thoughts about this update.