While Service Management Automation (SMA) provides a cool web-based runbook authoring experience in the Windows Azure Pack, many folks are more comfortable using a good old-fashioned tool they’re already familiar with to write PowerShell – the Windows PowerShell ISE. While in theory it should be very easy to write SMA runbooks in the PowerShell ISE since runbooks are essentially PowerShell workflows, in reality there are a few hiccups one needs to overcome. This blog post will outline those hiccups and explain how you can overcome them to make your PowerShell ISE into a lean, mean, runbook-authoring machine. It also provides a download of the EmulatedAutomationActivities PowerShell module, which lets you use the Get-Automation* activities that were previously available only in SMA runbooks, in regular PowerShell.


Before we discuss the authoring of runbooks in the PowerShell ISE, let’s talk about the basic process you’ll want to follow when authoring your runbooks outside of SMA’s own runbook authoring tool.


For a new runbook, follows these steps:


If you are attempting to modify an existing SMA runbook rather than write a new one from scratch, the steps looks like this:

Since this post is all about using a familiar PowerShell environment over the Automation portal in the Windows Azure Pack, let’s quickly cover how you can take the above steps from the PowerShell ISE, without using the SMA portal at all. This is possible via the cmdlets of the SMA PowerShell module :

One thing to note is there is currently no way to kick off a test of an SMA runbook draft using the SMA PowerShell cmdlets – you cannot start a runbook’s draft version from the cmdlets, only its published version. So if you want to kick off a test of a runbook you wrote in the ISE and then transferred into SMA, to make sure it works correctly in SMA, you need to publish the runbook in SMA, and then start it.


There are a few things you will need to do / understand to fully take advantage of the PowerShell ISE as an SMA runbook authoring tool.


The first thing to be aware of is a tiny detail that people tend to forget which can cause some headaches. This detail is the difference between running a workflow as a runbook in the SMA authoring experience versus running it as a PowerShell workflow in the PowerShell ISE. On the SMA authoring page, running a runbook is as simple as hitting the Test button. This will compile and start the runbook. However, in the PowerShell ISE, there is no equivalent “compile and run” button. You must first compile the workflow by defining its definition in PowerShell, and then run it by typing out the workflow name. 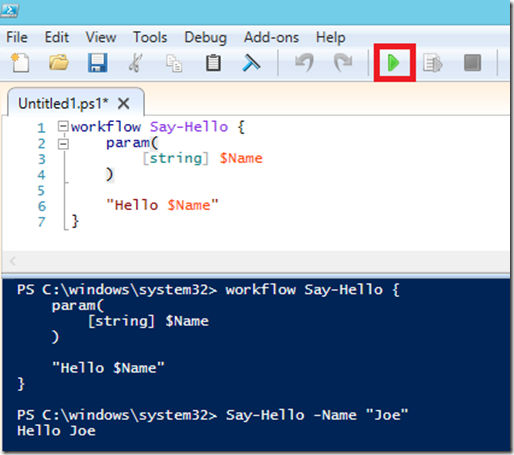 Note As you continually update and test the workflow, remember to click the “play” button before each test to run the script, causing a recompile of the workflow to include your latest changes. If you run the workflow without recompiling it, you will still be running the version of the workflow that was last compiled.


The best practice here if you want to write these runbooks in the ISE is to start from the innermost child runbook, and work your way outwards until you are at your overall parent runbook, which you would start in order to kick off all child runbooks you wrote, and any child runbooks those child runbooks call, etc. This way, you are writing runbooks in an order where the dependent (child) runbooks of any runbook you write already exist.


In terms of the details, there’s a number of different scenarios for writing parent / child runbooks in the ISE, depending on whether you are calling the nested runbooks synchronously or asynchronously, and whether the nested runbooks already exist in SMA or not. Below I’ll outline the important aspects of each scenario and how you can handle them.


If you want to start a child runbook asynchronously from a runbook you are writing in the ISE, and the child exists and has been published in SMA already, you should use the Start-SmaRunbook SMA PowerShell cmdlet to start the child runbook via the SMA web service. The SMA PowerShell module can be installed locally from the SMA installer, allowing you to use the Start-SmaRunbook cmdlet in your PowerShell workflows in the ISE. Because the SMA PowerShell module ships as an out of box integration module in SMA, it is already available for use in SMA runbooks, so using this cmdlet in a workflow in the ISE and then moving that workflow into SMA as a runbook will “just work.” 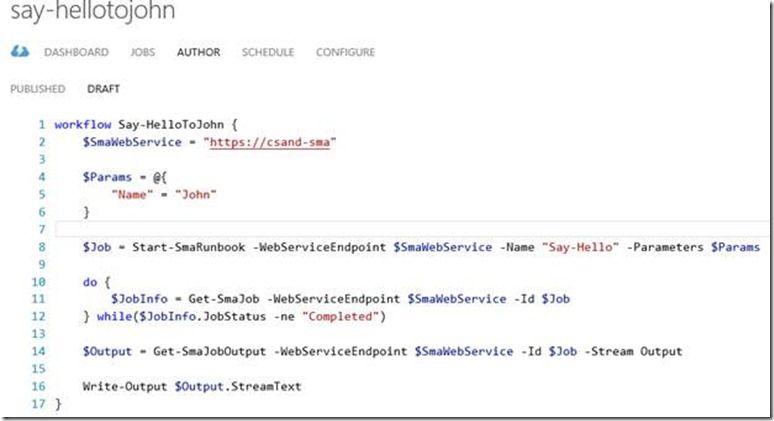 If you want to start a child runbook asynchronously from a runbook you are writing in the ISE, and the child does not exist in SMA already, the scenario is very similar to the scenario just discussed above. Simply follow the best practice and write the child runbook first in the ISE, then import it into SMA and publish it. Then use Start-SmaRunbook in the parent runbook as discussed above.


Once moved to SMA, make sure the child runbook is published before attempting to run or publish the parent runbook which calls this child runbook. As you can see below the workflows can work in SMA as runbooks with no changes from the ISE versions: 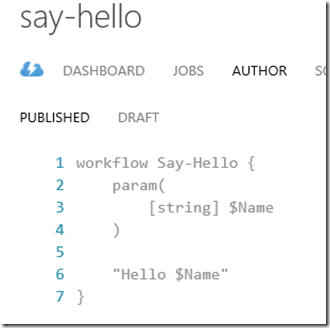 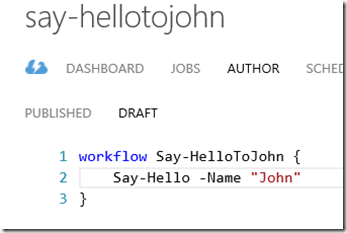 
SMA ships with a set of activities useful for interacting with SMA assets from within runbooks. However, these activities do not exist outside of the SMA runbook execution environment. This means there is no way to take advantage of these activities from the PowerShell ISE. These activities are:

Since SMA runbooks are meant to rely heavily on SMA assets to reference important information that shouldn’t be hard coded within runbooks, having access to these activities during runbook authoring is very important. As you can see from below, since these activities don’t exist in the PowerShell ISE, runbook authoring can be challenging to do in the ISE if you want to follow best practices of relying on SMA assets. The workflow being shown below calls the workflow Say-Hello, shown previously in a screenshot above, as a child runbook.


The variable our runbook relies on. It contains the value “Scott”:

The runbook we are writing, working correctly in the SMA authoring experience: 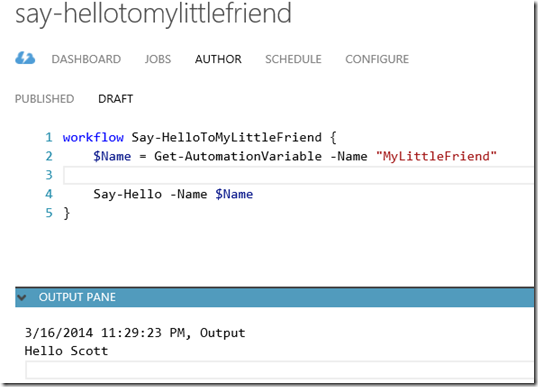 The runbook we are writing, failing to compile in the PowerShell ISE, because the Get-AutomationVariable activity is not available outside of SMA:

So, how can we get around this obstacle and write runbooks that depend on SMA assets from the PowerShell ISE? Well, as you probably know, we have this great set of cmdlets in the SMA PowerShell module that let you, among other things, get SMA assets, set SMA assets, and start SMA runbooks. Wouldn’t it be great if we could somehow take advantage of these cmdlets to implement non-SMA versions of the SMA-only activities for use in the runbooks we write in the ISE? For example, could the ISE implementation of the Get-AutomationVariable SMA-only activity internally use Start-SmaRunbook to start a runbook that outputs the value of an SMA variable, and then use Get-SmaJobOutput to grab that output?

Note The EmulatedAutomationActivities module should not be installed on any SMA Runbook Worker host. If it is installed, it could cause runbooks running on that worker to fail because the worker won’t know whether to use the real Get-Automation* activities or the emulated ones when it runs runbooks. This means that if you want to take advantage of the SMA-only activities in the PowerShell ISE, you can only write ISE runbooks on a host that is not an SMA Runbook Worker.


In order to take advantage of the EmulatedAutomationActivities module, all you need to do is:

7. Tell PowerShell to allow this module to be loaded even though you downloaded it from the Internet:

Now just open up the PowerShell ISE, and kick back, relax, and take advantage of SMA-only activities in the runbooks you author. Here’s the same Say-HelloToMyLittleFriend runbook that didn’t work in the ISE before, now working thanks to the EmulatedAutomationActivities PowerShell module! 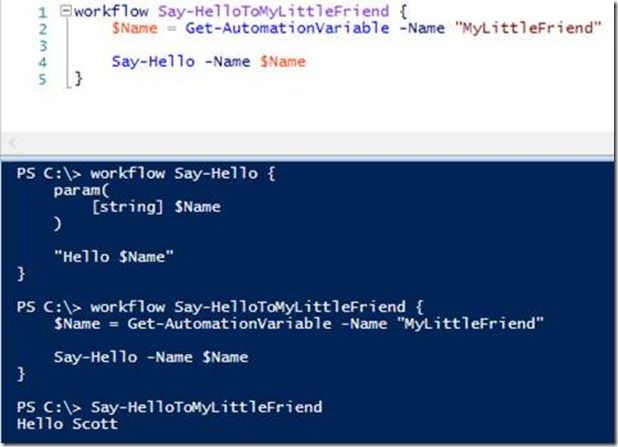 
The fact that this runbook outputs the serialized values of SMA assets, combined with the fact that this output is in plain text, means that when this runbook runs it is possible for someone with access to SMA to see the values of “secret” SMA assets, whether they be credentials, encrypted variables, or encrypted connection fields, in the output of Get-AutomationAsset’s jobs. For this reason, as a best practice , runbooks you write that leverage the EmulatedAutomationActivities module to work in the ISE should only be used to grab non-encrypted assets, or encrypted “test” SMA assets (those that only provide access to “test” systems or contain “fake” secret information).


There are a few ways to work around this, for example write runbooks in the ISE as the runbook worker service account (log in as this account, then open ISE), but the best practice is to make sure your runbooks don't need to be under the context of a certain user to work. The way to do this is to make sure any activities you perform that require some higher access level are placed within an InlineScript activity, and the InlineScript is run with the -PSCredential parameter specifying the credential of the user this InlineScript needs to run as to perform this action. That way, the account the runbook worker service runs as won't matter.


If you’re one of those folks who loves the PowerShell ISE, you should now have the knowledge and tools you’ll need to successfully write and test your SMA runbooks there. Best of all, you won’t have to sacrifice any runbook functionality just because you’re writing runbooks in the ISE, such as nested runbooks or access to SMA assets.


Until next time,
Happy automating (from the PowerShell ISE!)