Editor’s Note: The following is a guest post by Mariam Elgabry , a Microsoft Student Partner in the United Kingdom who currently attends Imperial College London. 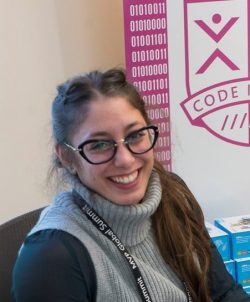 I recently traveled to Washington State as a Microsoft Student Partner (MSP) to represent the U.K. for Microsoft’s 2016 Most Valuable Professionals (MVP) Global Summit. Needless to say, I could feel those flutters! Only 13 students were selected to represent the world. We had students from Japan, Switzerland, Dubai, China, France, Mexico, Canada, Poland, Germany, United States, India, Singapore and United Kingdom MSP representatives with origins from Greece, Serbia and Vietnam, to name just a few.

All millennials, all different and special in their own way: a founder of a startup, a gamer (or a few), a Rubik’s-cube expert, a metal-head, a dancer, a mathematician, the youngest MSP, all computer science experts – and then there was me: a recent bioinformatician and former biochemist. All in Microsoft’s garage, a cool space full of games, Legos, crayons, anything you can imagine, spread out in front of you for the sole purpose of creation, innovation and expression. We were introduced to the ever-so-wonderful concept of getting out of our comfort zone to better develop ourselves and then given programming tasks with tools we had never used before. Coding all day, it was by far one of the most distinct moments in time that I felt comfortable and free. I was surrounded by people I had just met (except for Gavin Gear , of course, the Chief Evangelist) yet felt like I always knew. 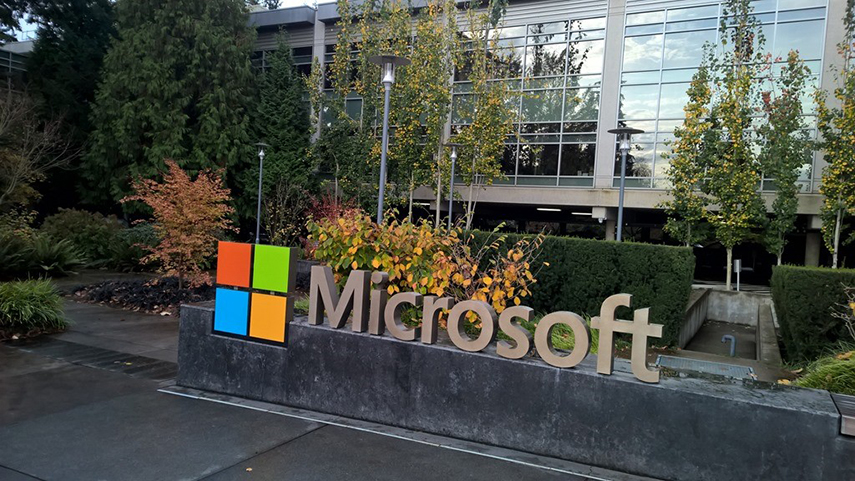 The first hack of the trip to get the whole group going was a potpourri of my favorites: Internet of Things (IoT) and Machine Learning (ML). We used the Arduino starter kit to measure the temperature and humidity of the room, streaming it live using Azure. Grouped in pairs, I was on Team JAPAN and U.K. 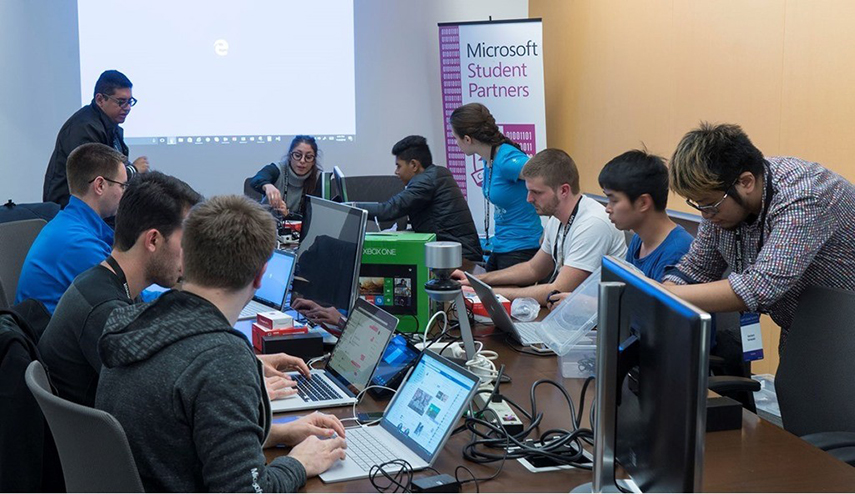 We worked well – despite the English-language barrier – we could communicate in code, our common linguistic. We divided our task into hardware and software setup, asked and helped each other with what to do next – and, boom, we had a winning tool in no time! We tried add some flair to our tech by attaching some Legos, when our catering arrived and, to our surprise, it was “make your own tacos,” which we all found funny as we like to program everything – even our food. 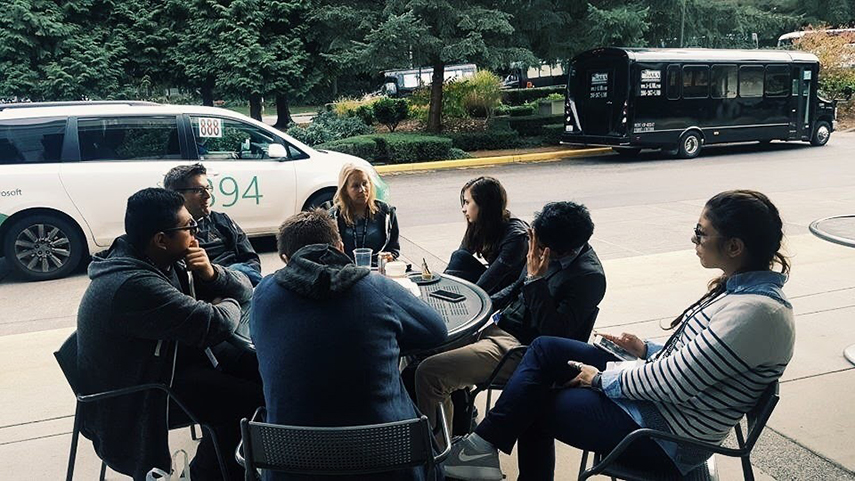 After lunch, we had to move on to the next task – Machine Learning. Here we used Azure ML to create a digit recognition tool using data from a real set of published research. We got to the part of publishing the model as a web service until we were treated (or cursed) with bowling and dinner. Well, at least I have established that bowling is possibly not my strongest of asset. After a few (or several) nulls – I finally got that longing for strike! Despite the difficulties in bowling, it was nice to connect with everyone under a different environment (i.e. no PC’s around), and getting to know each other better and finding common grounds, like being horrible at bowling!

At breakfast, “tiny robots are configuring your experience…” lit blue on all our phones after clicking on the MVP Summit app, the first day of the Summit began while we discussed the different sessions we planned to attend. We planned when to meet and share what we had learned, as there were just too many exciting sessions all running at the same time. It only takes a few programmers to maximize the sessions we could attend! 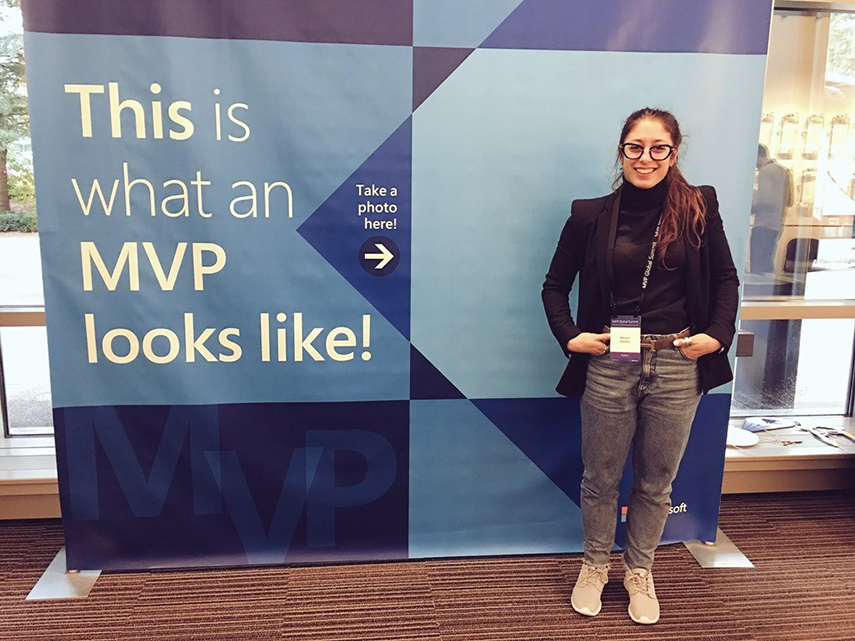 Then off we went to campus, Microsoft Building 33, to be a part of a summit gathering the most valuable techies all over the world – now that’s what I call community! This is the running theme in this post and the most important thing I took from the whole trip – this sense of community within Microsoft: like-minded people driven by their work, open to new ideas and tools, problem solvers – and you know what? Cool geeks! It was finally acceptable to make jokes with tech references, like “I’m not R-eady for the Data Science session,” or when we were overloaded with information saying, “stackoverflow.”

We met proactive learners such as the “LED-man,” who came decked out in a block of LED lights attached to the front of his shirt. The LED lights were connected to his Microsoft Band, and would change color from greens and whites to reds and yellows when his heart rate increased. This was, he said, a way to “understand ourselves and others better through tech.” This is where I want be, we all thought, in an innovation hub, where problems get solved, where we think outside the box.

Several sessions later, some in IoT, others involving security, it was inevitable, considering my background, that the one that hit home most was the Data Science and R session – most importantly in relation to ML. I was fascinated at the work that has been done and, after the session had ended and with an idea for a project brewing in mind, I decided to have a chat with the presenter. That lead to an email exchange and meeting the following day, with another running theme of this blog: Opportunity. Being able to pick someone else’s brain, bounce ideas off experts in the field and receiving that validation.
We were introduced to old and new tech, insights for future implementations – wouldn’t you like to know! – and it was clear that we were a part of the family. It felt great.

That was a wrap for the first day of sessions, which was then topped off with a Rock-aoke Ball at the Hyatt Hotel. The venue was filled with racing and Pacman gaming corners, board games on every table, a karaoke for the brave ones, MVP T-shirt printing, oh! and William the Bear, an Azure bear expert (find him on Twitter), who met us and watched us play Jenga. I also got the chance to catch up with developers I had previously met from conferences in London, and met new ones from all over the world. 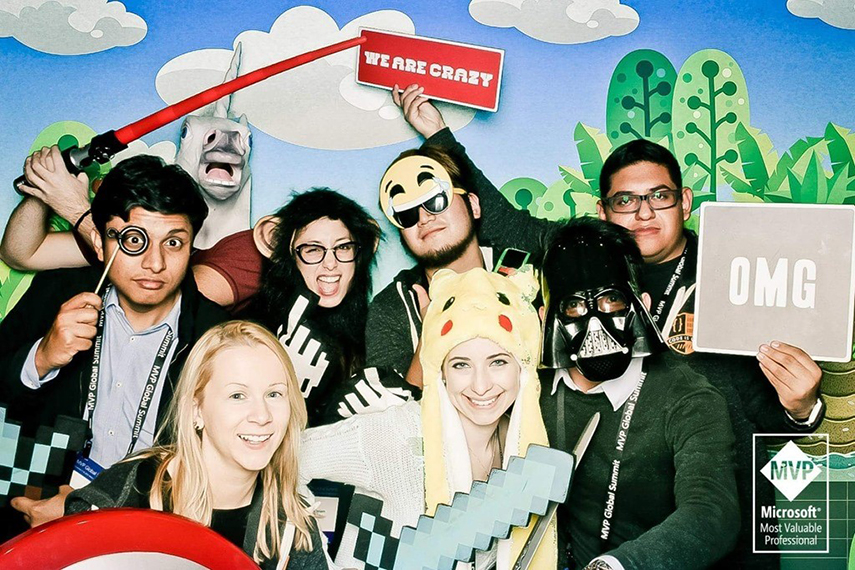 Everyone was up and ready for the second day – keen on the new things to learn and discuss. We took a shuttle bus to Building 36 for our first on the list: Machine Learning! The session introduced Microsoft’s new plans for data scientists, with a room full of experts discussing potential tools that would be beneficial for them and their clients. This was where ideas bloomed, and we were all a part of it.

With a break in hand, a group of MSPs wanted to check out the famous Building 92 – i.e. for non-geeks: the Microsoft Employee Store. We ordered a shuttle and were on our way! Soon, we were in a room full of cool Tees (my personal favorite: “my head is in the cloud”), Minecraft pigs, hardware – especially the new Arch Touch Mouse – games and Microsoft-branded gear. Happy with all my new stuff, I started showing off my swag to as MSP from Mexico, only to find that he had already gone (I think we estimated at least 5 visits) and had bought cool stuff of his own! Now returning to the sessions, there was more on tech that we all discussed over lunch, where Gavin joined us to offer some more “soft skill” advice. It was great getting insight on “how to land your summer internship or graduate job,” but also realizing what a successful candidate entails. Thanks, Gavin! 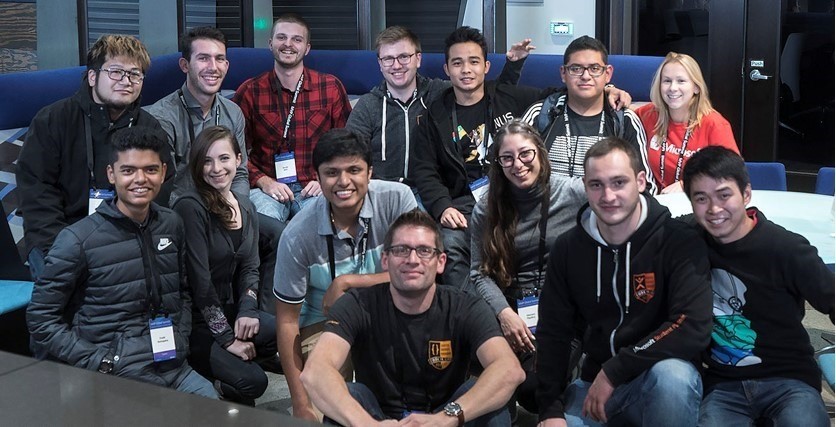 Next, it was time for our second hack: Building a dormitory room security system using the Raspberry Pi 3! We were again divided into teams – I was in team Japan, Mexico and U.K. Just to set the scene, I was not only new to using the Raspberry Pi, but I also learned two more languages: Spanish, as Visual Studio was setup by Team Mexico, and Japanese, as Team Japan had translated the tutorial. We all worked together with the U.S.’s national elections playing in the background, errors in builds ringing across the room, API face recognition recordings having fits at “I’m sorry I do not recognize you” … Soon, the time was up and we had (for a good solid two minutes, until we lent our screen to another team) a working security system for our imaginary dorm. Gavin’s random selection algorithm seemed to work well too, predicting Trump as the new U.S. president!

Summit Day 3 – Chatbots and Going Out on the Town

The bus was awfully quiet the next morning when I found William the Bear and inevitably discussed politics to conclude with, “Our generation will be of interesting political development.” Reaching the campus, I was quite keen for the Virtual Reality and Cognitive Services sessions running that day. I can’t say much about the VR part, which was kept under pretty tight lock and key, but the Cognitive Services session was great as team Dubai and I built our very own and very first chatbot! We can now develop bot-assistants to help us stay on track with meetings, classes and appointments, bot-informants to let us know the latest news on certain topics of interest or flights to places we always wanted to visit but were on the pricey side – even botfriends, to greet us in the morning or every time we logged on our PC’s.

That brought the end of the sessions in the summit with a free evening to explore Seattle. So a few of us went back to the hotel, dropped our stuff off and headed into town to see a few of Seattle’s finest sites. Team Dubai, Switzerland, Singapore and U.K. grabbed an Uber and headed to the Space Needle, once the tallest building in the west at 184 meters high (this took a few seconds to convert from feet). Then, we had dinner at the SkyCity Restaurant at the top of the Needle with the breath-taking view of Seattle by night. I’d highly recommend the salmon if you ever get the chance to visit, but after our stomachs were fully-fed and satisfied we headed up to the observatory, where we took a few selfies with the beautiful view. 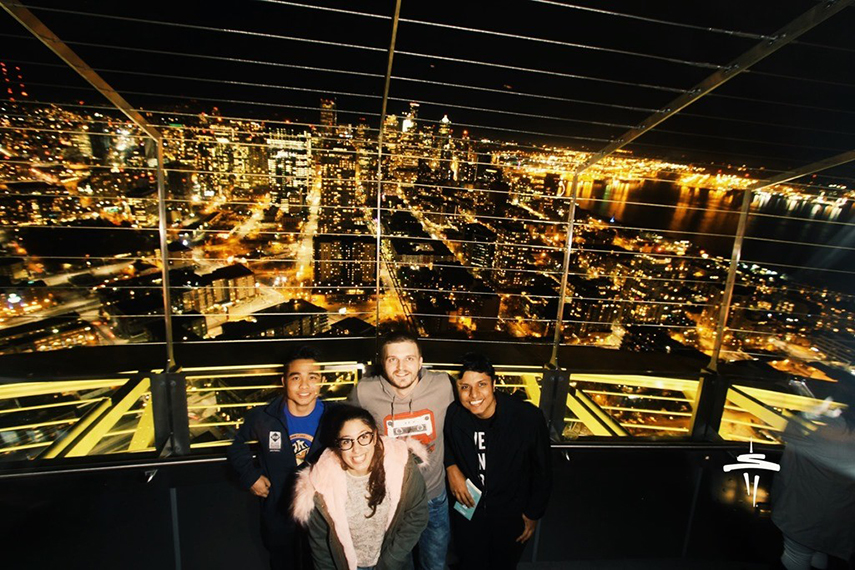 Our guide was team Dubai, as he had already done a bit of sight seeing, flying in a few days early. Once we were finished with seeing the city from above, we headed back down toward the very first Starbucks – established in 1971 – and the famous Pike Place Fish Market. Before turning this into a tour, the take home message here is that on our way to all these sites, it didn’t matter what we saw in the end or where we went, but the journey and the laughs we had in between. We all broke into tears and had sore cheeks from all the laughter (maybe as a result of caffeine withdrawal and what we called lagged jet-lag.) We shared stories and made new memories by riding the Seattle Monorail for the first time, riding a pig at the farmer’s market, taking selfies at the gum-wall (yes, literally, a wall full of chewing gum), discussing our ideas for the future by the Port of Seattle and our ambitions under the city lights.

“We are the future”

It was already time for the last breakfast together, and as we were all sad that such a great trip and experience had come to its end, Edwin M. Sarmiento, a SQL Expert, joined us for what was to become a very inspirational conversation. He told us it was “OK to fail,“ sharing his personal stories, and listened to some of ours. The summit might have come to an end, but we soon realized that this was only the beginning, or in the words of Edwin, “We are the future.” 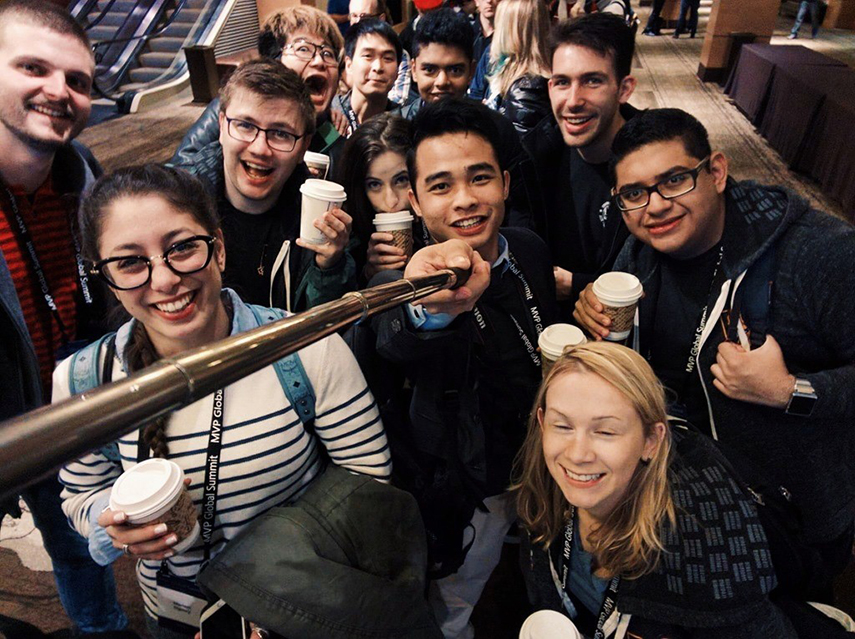