Came for the tech, stayed for the curiosity: Meet Christian Hissibini

Came for the tech, stayed for the curiosity: Meet Christian Hissibini 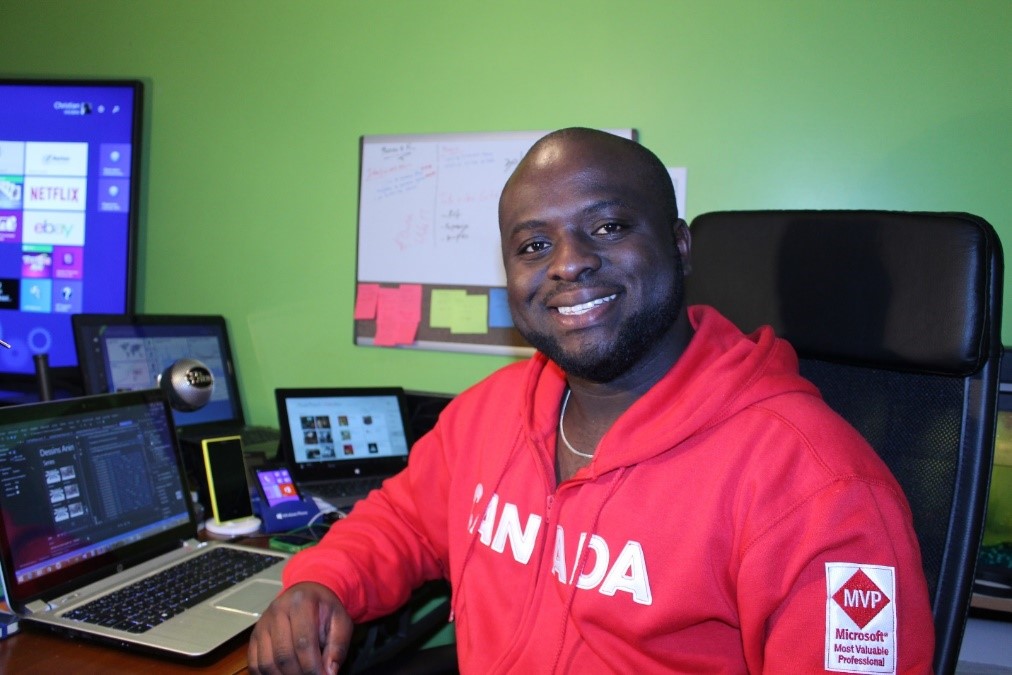 Christian Hissibini, a Microsoft Student Partner at the Université de Montréal in Montreal, Canada, is the kind of person who infects the room with his laugh. After a conversation, you realize you have been grinning throughout the entire chat. He puts you at ease with his light-hearted nature, and yet is still excited and eager to share his passion for developing and his knowledge of the Microsoft tools he believes every student developer should use.

Christian is about to launch a new music app for Windows 10 that takes advantage of several music and online video services to offer a more personalized and rich experience to users. On the brink of this accomplishment, we spoke with Christian about growing up in Cameroon, his very first computer, developing more than 50 apps for the Windows platform and how following your curiosity is always the best policy when it comes to technology.

As a child in a big family growing up in Cameroon, Christian had to share one TV set with seven other children. Christian loved video games, but it wasn’t easy to get the screen time he wanted.

“When I was around 11, I made an agreement with my mother: If I could win the top score on the annual junior mathematics contest in our city, she would offer me the gift of my choice. I worked hard and I did it! When my mother showed me the catalogue to pick out a computer, I chose one without knowing anything about computers,” laughs Christian.

Because Christian’s school did not offer computer science classes, his exposure to computers was limited. He saw a picture of a screen and a keyboard and a joystick attached. He chose that computer, and it turns out “it came loaded with an Italian version of Windows 95!”

“Thanks to my curious nature, I began to experiment with [the computer] and figured out how to switch my system to a French version of Windows,” he says with a chuckle.

The curiosity that compelled this junior high math champion to fix his computer continues to fuel Christian today.

Though Christian just turned 30 years old, his resume reads like someone much older. Right after graduating from the University of Cameroon, he founded HisTech Solutions, a business specializing in web development, websites and web apps.

Wanting to expand his horizons beyond Cameroon, Christian moved to Canada to get more schooling. Once in Montreal, he began to work as webmaster for the department of mental health research at the University of Montreal, rebuilding the department’s website from scratch.

Christian began to develop for Windows when he realized that he could use his HTML/JavaScript skills to build on the Windows app and Windows Phone platforms. Two years later, Christian’s company, HisTech boasts more than 50 apps for Windows and Windows Phone, with 1.7 million downloads. He says that each app has a special place in his heart, but a few really stick out. Especially the first app he created.

“Originally it was just a project to help me practice in my learning of C#. But just a week after publishing it in the store, both its English and French versions had thousands downloads, with very good reviews in many countries. It motivated me to create other apps,” he said. 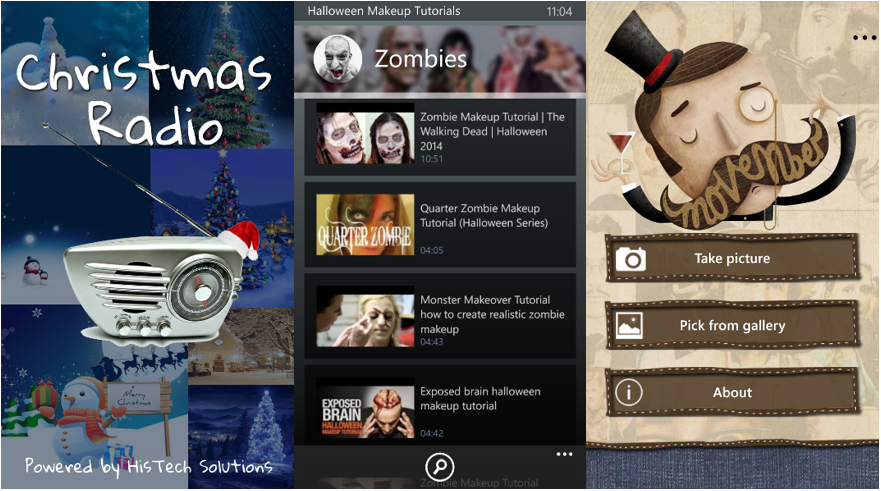 Among other things, HisTech’s other apps (see the screenshots above) would cover subjects like Halloween makeup tutorials, Mustache photo editors and Christmas music apps. In fact, he began to notice a pattern surrounding major holidays.

“With the success of my previous apps, I found that creating apps linked to festive events is a good niche.” He was right. One of his popular apps, Christmas Radio , was highly recommended in Lumia Conversations UK , and got 52,000 downloads.

What keeps Christian busy? A lot! In addition to always updating and adding new functionalities to his existing apps, he is writing a few new Windows Phone apps for streaming music and on-demand video, writing a book on Azure Mobile Services, working on a series of videos tutorials and blog posts, and preparing for public speaking engagements coming up this year.

Unbelievably, he assures us that “I still have much time to chill with friends, to go the gym, to watch TV shows, and to play my Xbox!”

We asked him what advice he has for students like you, who might be considering a career as a developer. Without hesitation, he said, “Don’t start following a path just because it could be a good experience or because you could make a lot of money. Start out with something you really love. Don’t just start a project to start a project. Have a purpose behind doing so.” 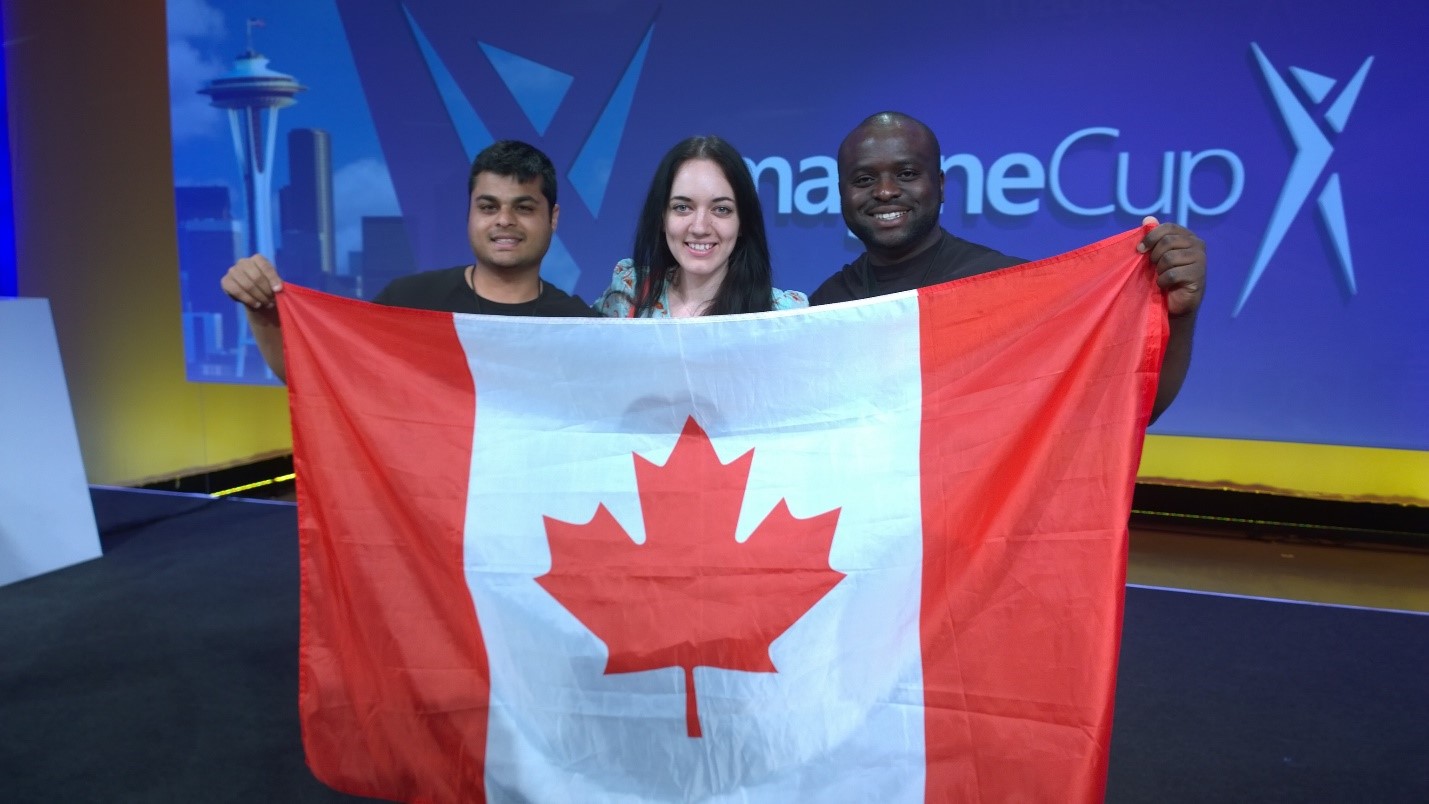 Christian knows that no matter his future path, he will evangelize technology wherever he lands. “Even if I am successful as an indie developer, on top of that, I am a social guy. After solving a technical problem or experimenting on a new thing, my first instinct is to teach what I have just learned. I love sharing my knowledge, helping and energizing people through my passion.”

Christian’s inspiring story makes us wonder, how far will your curiosity take you?

To learn more about the free tools Microsoft offers to student developers like Christian, visit Microsoft Imagine . There, you can download free tools like Visual Studio and Windows App Studio . Also, be sure to check the Microsoft Virtual Academy where you can teach yourself how to code with courses like “ Windows Phone 8.1 Development for Absolute Beginners ” and “ Creating Windows Store Apps Using Visual Basic .”
0 Likes
Like