Hi all! My name is Steven Cooreman, and I’m a Belgian Microsoft Student Partner. Currently living in Oslo, I’m a graduating electrical engineer, but am also an app developer on the side with a few highly rated phone apps. In that regard, my main interest for going to Build is to hear and learn more about Microsoft’s Internet of Things story and improvements in the app ecosystem. 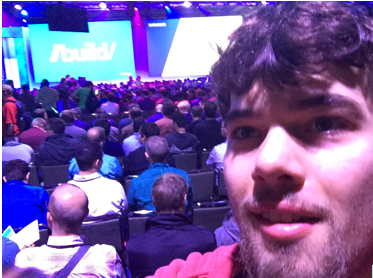 My, oh my, what a day! Barely having recovered from jetlag, it started out pretty early with breakfast at 7:15 a.m., when people were already queuing for the keynote at 8:30 a.m. Wait, I wasn’t supposed to get there that early, was I?


By the time everyone shuffled into the gigantic keynote hall, or found his and her way to an overflow room, it was time to start. Strikingly, one of the last songs blasted through the speakers before the keynote was “Insomnia” by Faithless. A sign of what has been and what is to come, perhaps, considering the pace at which new announcements kept rolling in throughout the next two and a half hours. And guess what, students were the first developers to get acknowledged, two minutes into the keynote… Woot!


From the first demo (Staffpad, I need to get my hands on that one someday…) until the last note of the closing music, the keynote was all about bringing back the spark of innovation to Microsoft. The keynote speakers touched on Microsoft going platform agnostic with a whole range of tools and software, and putting the focus back onto developers instead of large corporations.


Allow me to highlight some of the announcements:


What sadly did not make the keynote was the announcement that Microsoft will be partnering with Arduino , and that the company just made Windows 10 IoT Kit available for the Raspberry Pi 2. If you have a RasPi2, head on over to Windows On Devices , and download the image. Having played with it for a bit, I must say it’s impressive how they managed to make embedded programming such a breeze! Especially cloud connectivity, which used to be a big issue for embedded developers, is now a lot easier thanks to Connect The Dots . Overall, I feel like there is a ton of very exciting new stuff being presented here at Build, and just not enough time to cover it all in the keynote.


In the afternoon, the 100 students at Build got the unique opportunity to attend a 30-minute Q&A session with Mr. Satya Nadella himself! While there were obviously way too many questions from the 100 lucky souls in the audience to cover during the allocated timeslot, we did get to hear some interesting tidbits. It sounds like Microsoft will be harmonizing its student-focused outreach and curriculum development, and is taking steps to have a more globalized approach to launching products, even when they are considered first generation.


Sadly, we did not get an answer from Satya as to whether Gandalf or Dumbledore would win the most epic battle of all time. :)


I’ll be back tomorrow with coverage of day two!