First published on MSDN on Aug 02, 2014
It's a wrap! Today is the last day of our 2014 Imagine Cup World Finals and we ended it with style. Our students packed up their equipment one last time and headed down to the gleaming Museum of History & Industry on beautiful South Lake Union in the heart of downtown Seattle. There we opened the museum for free to the public and as the clouds parted and the sun shone down, a crowd of Seattle families came to see all the amazing projects our students created.

The Museum was at capacity for much of the afternoon. There were a ton of fun activities for kids including live music by the children of the School of Rock and by the D20 Brass Band, a Space Shuttle bouncy house, free ice cream (!), mad science experiments, breakdancing by the Massive Monkees, and much more.

Inside, guests mobbed our Imagine Cup students to try out their projects firsthand. This was our third showcase event during World Finals and by now, these students are veteran demo-givers. They spent four hours showing off their incredible work and the crowd loved it.

All day, visitors could cast their votes for the Avanade People's Choice Award. As the showcase wound down, we announced the winner: Team Chemicalium from Bosnia and Herzegovinia who won $2,000!

Finally, there was one last surprise: an official from the office of Seattle Mayor Ed Murray brought forth a formal proclamation that today, August 2nd, 2014, was officially Microsoft Imagine Cup Day: 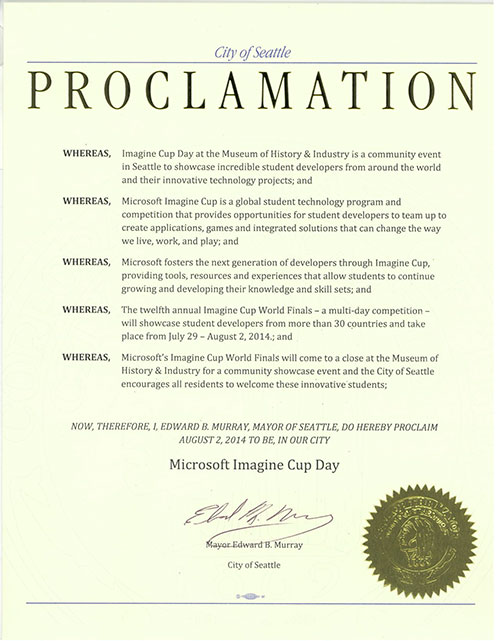 This has been a truly incredible week. Student after student has told me what an amazing experience they've had. Regardless of whether their team won or lost, these students are all champions who have brilliant futures ahead. I'm both honored and humbled to be a part of this, but it's an honor I am fortunate to share with the rest of our team, our colleagues from around the world, the team mentors, and most of all the incredible 2014 World Finalist students: we are all Imagine Cup today.