2013 Imagine Cup Champs: Where Are They Now?

2013 Imagine Cup Champs: Where Are They Now?

First published on MSDN on Jun 11, 2014
With the 2014 Imagine Cup World Finals right around the corner, the top 35 World Finalist teams from around the globe are eagerly preparing their projects and getting them ready for our judges in the final round of the competition this July. Looking ahead, students may be asking themselves, what comes after Imagine Cup? Although the answer to this question may vary from team to team, one thing is for certain -- the possibilities are endless!

For Team Zeppelin Studio, the winners of last year’s Games Competition , life after Imagine Cup has indeed been full of endless opportunities as they continue to pursue their dreams.  The team took home first place with their project Schein, a challenging puzzle platformer, and have since evolved the game from an academic project to a newly founded company with a fresh vision of the future. We had the opportunity to reconnect with them to check in on what their life after Imagine Cup looks like, how the competition helped them get where they are today, and if they could share a piece of advice for this year’s participants. Read on for the full story.

In 2011, Zeppelin Studio started developing Schein as a school project at the University of Applied Sciences Technikum Wien in Austria. Through the help of DreamSpark and BizSpark where they received access to free developer tools, the team created the 2D platformer game on their in-house engine based on C++ and DirectX where the player’s light radius uncovers dimensions which are key to the solution of the puzzles. They used a combination of Microsoft’s Team Foundation Server and Visual Studio , as well as a number of third party solutions for asset production to continue evolving the game.

Looking back on their experience, Zeppelin Studio found the competition to be an incredible resource to jumpstart their idea into a tangible product. When asked about the impact of Imagine Cup to where they are today, they answered:

“ Today we are established as independent developers with our own company and the Imagine Cup has greatly helped us to make this possible. The experience we gained and the contacts we made are invaluable. And the prize money was obviously a great 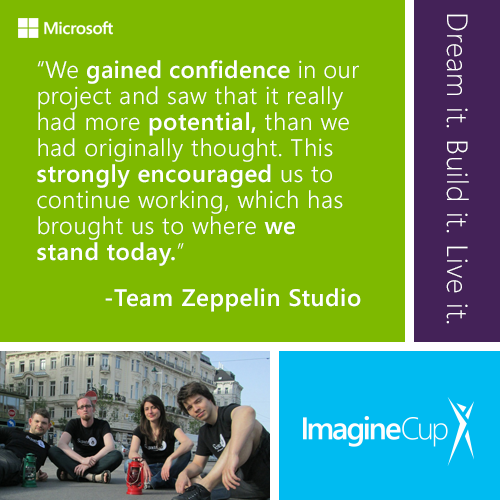 help too,  since it provided a foundation for our company. With it we could visit games conventions, create merchandise and other presentation material and – finally – pay salaries. The contacts we made were very valuable to us. Some mentored us, others gave feedback and others simply referred us to further contacts, which would be useful. And the feedback we received pointed us in the right direction and helped us to succeed .”

But in terms of the most valuable takeaway from the entire experience? They replied:

“ We gained confidence in our project and saw that it really had more potential than we had originally thought. This strongly encouraged us to continue working, which has brought us to where we stand today .”

A Message for Current and Future Imagine Cup Participants: 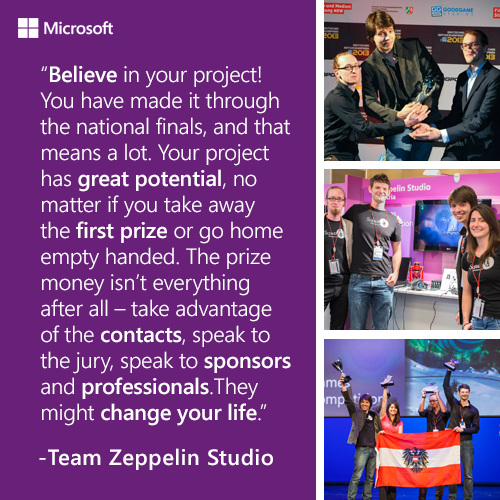 On the topic of roles and responsibilities:

“ We have come to know many small aspiring start-ups who very often suffered from the lack of an internal structure. Democratic structures are great, but in the end there needs to be one mediating authority to find the best decision. Single team members need to have defined responsibilities, e.g. graphical assets, online presence, programming, but there need to be people in lead positions, who finally make the decisions and take responsibility for the consequences. We have also found that the project manager is an important link, supervising tasks of the team members and keeping track of deadlines. ”

And most importantly, advice on how to make the best of finals week:

“ Believe in your project! You have made it through the National finals, and that means a lot. Your project has great potential, no matter if you take away the first prize or go home empty handed. The prize money isn’t everything after all – take advantage of the contacts, speak to the jury, speak to sponsors and professionals. They might change your life. And most of all ENJOY – this is probably a once-in-a-lifetime experience. We had even extended our stay in St. Petersburg for a couple of days to see more of the city, and that was a great decision .”

Where are they now?

Since competing last year, Team Zeppelin Studio has reached a few significant milestones both as a team and in their project. In the same year of winning Imagine Cup, they went on to achieve another first place title in the Newcomer category of the German Developer Awards, a prestigious award that holds incredible promise in Germany’s tech community.  Shortly thereafter, the team took the next big step and formed a company appropriately coined as Zeppelin Studio as a basis to continue scaling Schein in terms of maintaining and distributing the game, as well as set-up a proper foundation for future projects to come. Although this new business model required some restructuring of the team from its original set of members, Zeppelin Studio is moving forward as strong as ever as they approach their next big release for Windows Desktop including XP, Vista, 7 and 8.

This budding company has big aspirations for the future but even so, they maintain a focus on balancing work and play. In the next five years, they hope to have a bright office with a frequently used coffee machine and a gaming corner with a couch, big screen TV and many consoles and games for breaks. They plan to have a few projects out on the market by then, and for all you Schein fans out there, perhaps some progress on Schein 2.

(In the meantime, don’t forget to watch the latest trailer of Schein and vote for it to be available on Steam !)