I will briefly summarize here how the iSCSI Target Server SMI-S provider fits into Storage management ecosystem, please refer to Jeff’s blog post for the related deep-dive discussion. Storage cmdlets are logically part of the Storage Management API (SM-API) layer, and the ‘Windows Standards-based Storage Management Service’ plumbs the Storage cmdlet management interactions through to the new iSCSI Target Server SMI-S provider. This blog post is all about how you can use the new SMI-S provider hands-on, using the SM-API Storage cmdlets. Note that iSCSI Target Sever can alternatively be managed through its native iSCSI-specific cmdlets , and related WMI provider APIs . While the native approach allows you to comprehensively manage all iSCSI-specific configuration aspects, the Storage cmdlet approach helps you normalize on a standard set of cmdlets across different technologies (e.g. Storage Spaces , 3 rd party storage arrays).

Before we jump into the discussion of Storage cmdlet-based management, you should keep two critical caveats in mind:

“You should think carefully about where you want to install this service – in a datacenter you would centralize the management of your resources as much as practicable, and you don’t want to have too many points of device management all competing to control the storage devices. This can result in conflicting changes and possibly even data loss or corruption if too many users can manage the same arrays.”

For most users, the compelling reason for managing an iSCSI Target Server through SMI-S is usually one of the following:

Let us do a quick review of SM-API/SMI-S concepts so you can intuitively relate them to native Windows terminology as we move into hands-on discussion:

To register an SMI-S provider, you need to know the provider’s URI – it is the machine name for a standalone target and the cluster resource group name in the case of a clustered iSCSI Target Server – and credentials for a user account that is in that target server’s local administrators security group. In the following example, the SMI-S provider can be accessed on the machine “fsf-7809-09” and the user account with administrative privileges is “contoso\user1”. Get-Credential cmdlet prompts for the password at run time (you can reference Get-Credential page for other more scripting-friendly, albeit less secure, options to accomplish the same).

After registering the provider, you can now update storage provider cache to get an inventory of all the manageable storage objects through this SMI-S provider:

You can inspect the available storage pools and filter by the friendly name, as shown in the example. Notice that the hosting volumes, which you already know iSCSI Target Server reports as storage pools, carry friendly names that include respective drive letters on the target server. Also notice the Primordial storage pool, which effectively represents entire capacity available on the iSCSI Target Server. However, keep in mind that you can create SCSI Logical Units only out of what SMI-S calls “concrete storage pools”, i.e. only from pools which have the ‘IsPrimordial’ attribute set to false in the following screen shot.

Or you can provision the possible maximum-sized virtual disk by using “-UseMaximumSize” parameter as shown:

If you prefer to use the New-StorageSubsystemVirtualDisk cmdlet, you need to specify the storage subsystem parameter, and in the example below, you can see it auto-selected a storage pool in the selected subsystem - the “iSCSITarget: FSF-7809-09: C:” pool.

With the New-VirtualDiskSnapshot cmdlet, you can take a snapshot of a virtual disk. 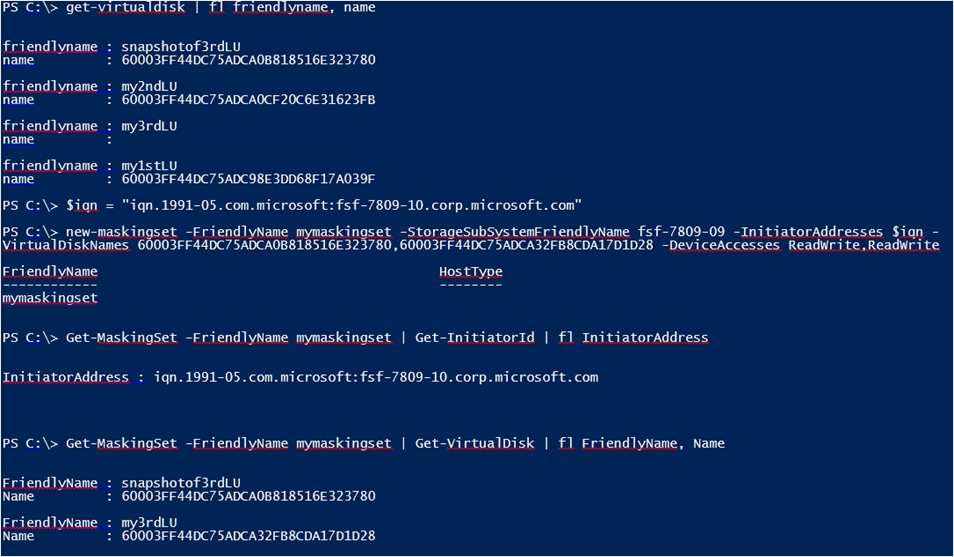 Modify and Remove the Storage Objects

With the Resize-VirtualDisk cmdlet, you can expand an existing virtual disk as shown in the following example. Note however that you will still need to extend the partition and the volume to be able to make the additional capacity usable.

You can also modify the masking set that you’ve just created, by adding additional virtual disks or additional initiators to it. Look at the following examples. Note however that you do not really want to share a virtual disk with a file system across multiple initiators unless the initiators (hosts) are clustered, else the setup will inevitably cause data corruption sooner or later! 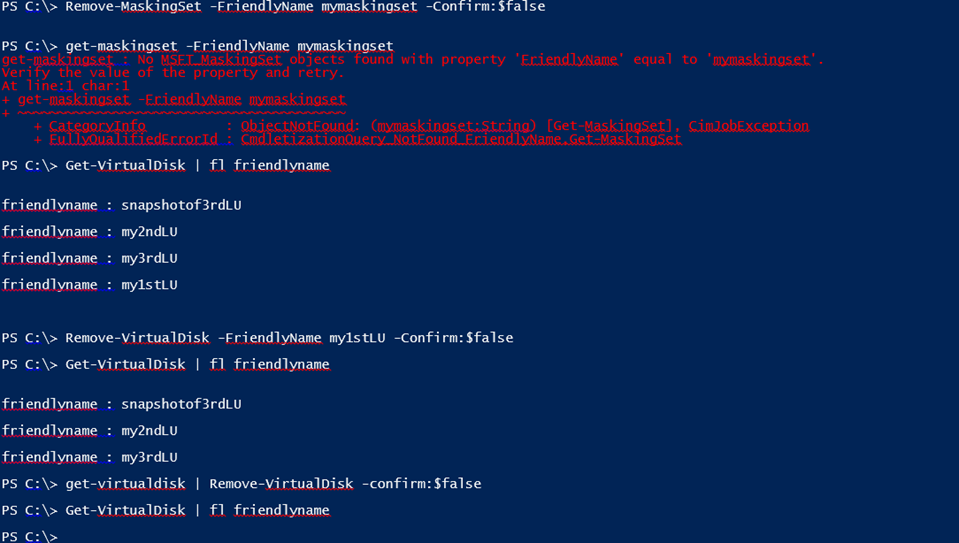 Finally, when you no longer need to manage the iSCSI Target Server from this management client, you can unregister the SMI-S provider as shown in the following example.

I want to acknowledge my colleague Juan Tian who had helped me with all the preceding Windows PowerShell examples.

Finally, I sincerely hope that you now have the tools you need to work with an iSCSI Target Server SMI-S provider. Give it a try and let me know how it’s working for you!