System Center Advisor: The Next Day….

System Center Advisor: The Next Day….


Yesterday I created a blog post on the Release Candidate launch of System Center Advisor: http://blogs.msdn.com/b/psssql/archive/2011/03/22/atlanta-becomes-a-product-system-center-advis...

At the end of that post, I told you the gateway had successfully registered my server but I had not seen any alerts posted yet. So what happened today?

I logged into www.systemcenteradvisor.com today using the same LiveID account I used to install the gateway and agent on my server. When I signed in my Alert dashboard looked like this (remember this server has SQL Server 2008 R2 RTM installed on Windows Server 2008 R2 RTM). 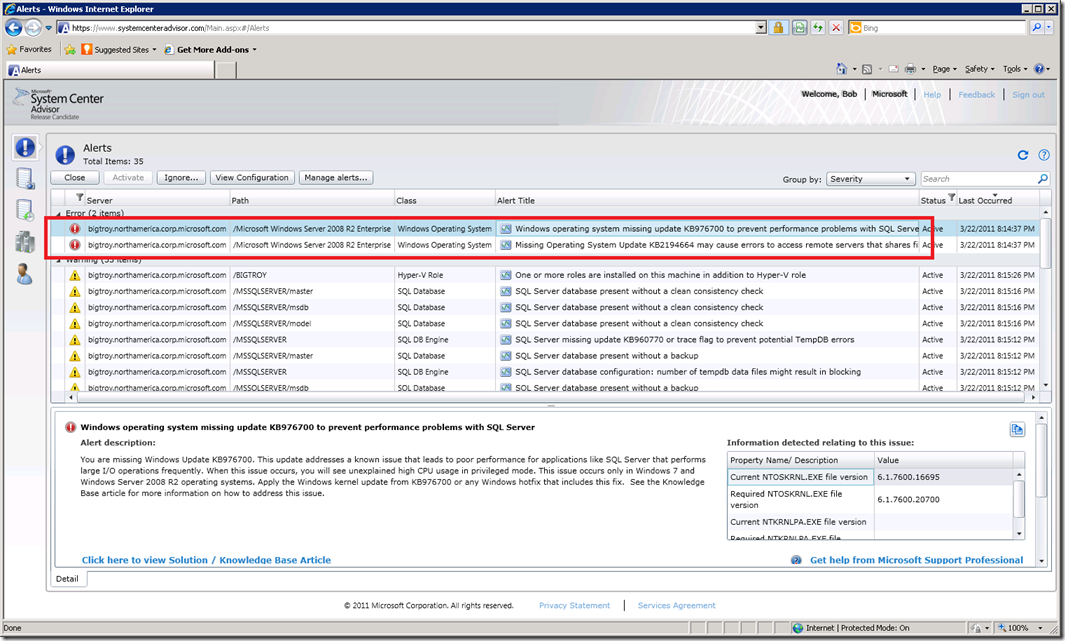 I will spend other blog posts touring you through some of the user interface features but I want to first talk about some of the rules. For this post, let’s focus on the first 2 alerts that System Center Advisor has recommended as Critical Alerts (note the RED icon)

The first Alert is for a Windows Update that can affect SQL Server performance:

It is very possible that if you have deployed SQL Server on Windows 2008 R2 that you might have not seen this Windows update. It is not pushed as part of Windows Update as it is not considered a critical fix that should be pushed to all Windows customers. However, in CSS we have seen many customers contact us with performance problems exhibited by unexplained high CPU (most kernel or privileged time) running SQL Server on Windows Server 2008 R2. Most of these customers were using fairly heavy user loads and applications that required a large amount of I/O. We’ve seen enough calls that we thought it was important to detect whether a customer had this update applied.  Since System Center Advisor can detect what is running on the server, this update will only be recommended to customers it applies to (namely Windows Server 2008 R2 where this fix has not been applied).

Note the section to the right of the description Information detected relating to this issue. This information allows us to provide the user context on how we detected the alert. You can see from this table that we look at the version of NTOSKRNL.EXE to determine if the fix has been applied. This is because for this Windows fix, this is the file that requires updating. We display the version of the file detected and the minimum version of the file required to fix the problem.

If you select Click here to view Solutions / Knowledge Base Article you will find that System Center Advisor puts you directly to the article that allows you to apply the fix: 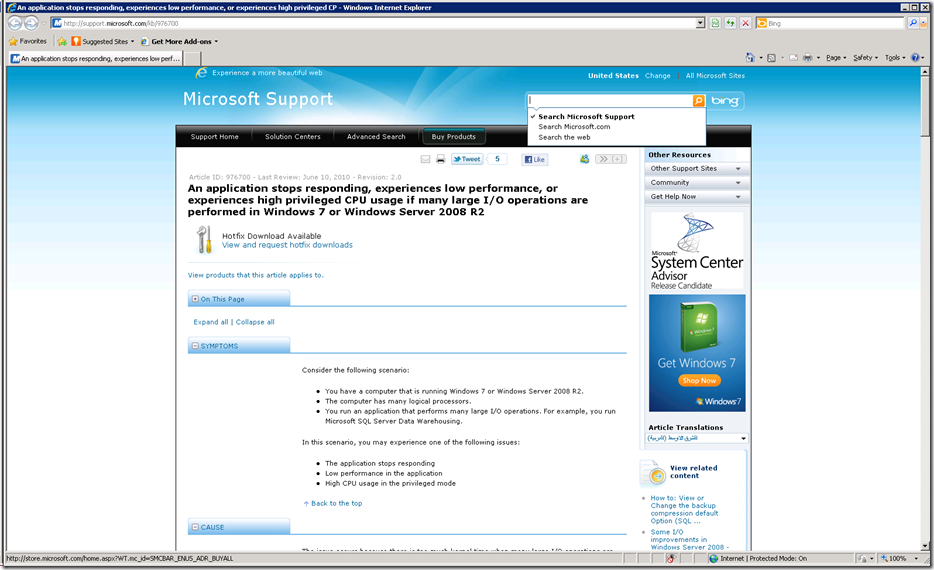 From here I can download and apply the fix should I determine if it makes sense for my server and environment. From our experience in CSS, if you are using any normal load of I/O for SQL Server on Windows Server 2008 R2, we recommend you apply this update. While this update is for Windows, the SQL CSS team recommended this alert go into System Center Advisor given the impact it has had on SQL Server users.

The second fix represents something new for the RC release of System Center Advisor, Windows Server alerts. The first alert was also for Windows Server but its origins came from research of SQL Server cases. The second alert is pure Windows.

This Windows update represents a common customer problem when attempting to use basic shared resources of a Windows 2008 R2 server such as files and printers. Again, we show the version of the file affected by this fix mrxsmb10.sys and the minimum version required to address the problem. The article link exists as well to apply the fix.

I’ve shown you 2 critical alerts that are both Windows updates that can save you a lot of pain and suffering. You should know that we carefully consider these updates we believe you should apply even if you are not seeing any problems. We pick updates that we’ve seen help many customers go through the pain you won’t have to if you apply them to your server.

Tomorrow I’ll show you a great new feature of System Center Advisor before I show you more alerts: the ability to System Center Advisor to detect you have resolved a problem described in the alert. We call this the “autoclose” feature. So what I’m going to do now is apply the updates recommended by these two alerts and see if the alerts still appear tomorrow no my dashboard