In this blog, I will modify a real scenario customer hit to show you that how you can use these trace flags to spot issues related to new CE and how SQL 2014 SP1 can help.

Customer reported to us that a particular query ran slowly on SQL 2014.  After troubleshooting, we determined that new Cardinality Estimator grossly over-estimated.  We compared the plans using trace flag 2312 (new CE) and 9481 (old CE).

Here is a simplified repro without revealing customer’s table and data.  Customer’s query is more complex.  But the issue is the over-estimation of a particular join that produced a bad query plan overall.

The script below inserts 1 million rows in table t.  c1 is primary key.  c2 has duplicates( each number repeats 100 times).

How many rows do you think the following query will return?  It will return 100 rows.  Note that I used querytraceon 2312 to force new CE on SQL 2014.  But if your database compatibility level is 120, you will get new CE without having to use the trace flag.  Again, the previous blog has instructions how to control new and old CE with trace flags and database compatibility level.

Do you think the query below will return more rows or less rows than the query above?  Note that I added an AND clause “t1.c1 <> t2.c1”.   This should have made it more restrictive and return no more rows than the previous query.  It actually returns 99 rows because there is one row filtered out by t1.c1 <> t2.c1. 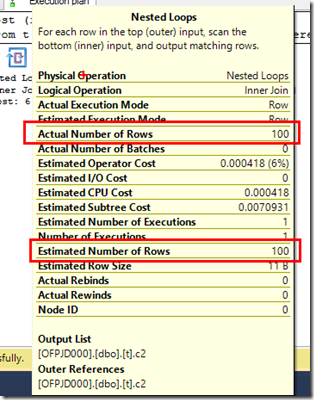 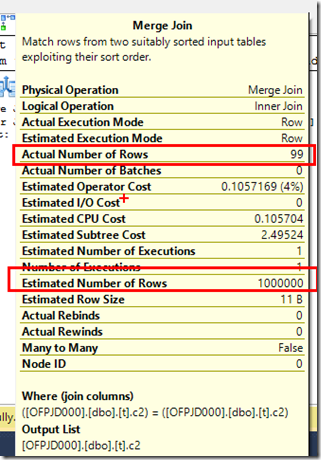 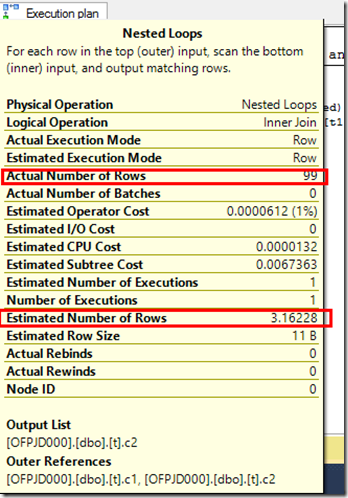 It is this behavior that made customer’s original query much slower. This is a bug in new Cardinality Estimator.

We thought it’s a new bug after SP1.  But as we looked at the fix more closely, it required trace flag  4199 to be enabled.  In fact all optimizer fixes require 4199 to activate.    After enabling 4199, SP1 was able to estimate correctly.  Customer tested their original query on SP1 with trace flag 4199 and it ran fast.

You need to apply SP1 but you must also enable trace flag 4199 in order to activate the fix.