How It Works: SQL Server 2005 Connection and Task Assignments

How It Works: SQL Server 2005 Connection and Task Assignments


I have talked about how connections and tasks get assigned as PASS and during many other mentoring opportunities.  I just finished working on an issue that forced me to dig deeper into the subject.

The customer reported that on a NUMA machine the connections are always getting assign to the same node.   They had determined this by looking at the CPU usage information and the node_affinity assignments.

To set the stage the basic rules for connection to node assignments are.

After more investigation I found that these rules need to be tempered with an endpoint discussion. 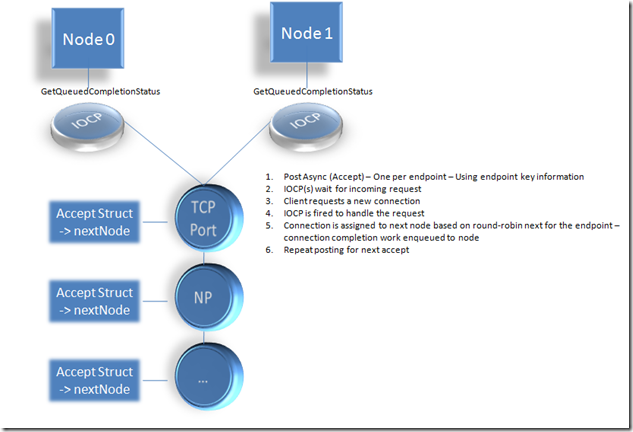 Thus, the message is tempered by round-robin assignments within each endpoint and not across all endpoints.   It is possible to make a TCP connection followed by a Named Pipe connection and get connection affinity assignments to the same node.

Be careful when evaluating the assignments as some applications establish a couple of connections during initialization and disconnect all but one of them.   This can make it look like the connection affinity is not working properly.   Reviewing the pattern of connect and disconnects in a SQL trace along with understanding the endpoint used provides the proper insight.

Once the connection affinity is established a scheduler is selected.

Note: Task can often be thought of as a batch.  Each batch is a new task request to server.

When a parallel query starts it looks at the number of available workers on each node.  The node with the most available workers is selected as the node to queue the parallel worker to.   So you could have Port A bound to only Node 0 but the query runs on Node 1 when run in parallel.

The other caveat with parallel query startup is that the SQL Server engine only looks at the available worker counts once per second.   So in rare situations it is possible for multiple connections to start parallel queries and they end up on the same node when you might expect them to use separate nodes.