Suresh brought to my attention that we have been getting questions as to why SQL Server starts on group 1 and then group 2 and it is not predictable?  Then Tejas brought up another issues and since I worked on this way back before we released SQL 2008 R2 I went back to my notes to pull up some details that I thought might be helpful.

The answer is that you need a SQL Server that is Group Aware to use more than one group worth of CPUs in Windows.  However, if you have an older version or a SKU that does not support enough CPUs to span groups the default is for Windows to start the service on any group.

SQL Server 2008 R2 uses the group aware so it will use new APIs and establish proper use of the entire system . 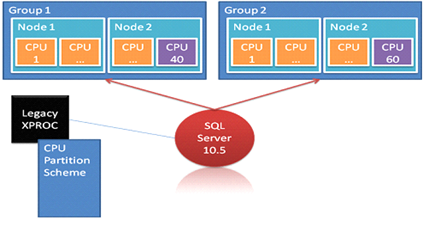 Some designs of legacy components may not be group aware or safe.  In the following example, if originally loaded on Group 2 the initialization would see 60 CPUs and create 60 partitions for a local memory manager which might work perfectly with proper synchronization.  However, if the original initialization of the partitions occurs on Group 1 it will only create 40 partitions and access from CPUs 41 ... 60 on Group 2 may fail as they don't exist.   ( SQL Server does not have any of these components.)

Windows allows you to configure node to group assignments

Note: There is a hotfix for Windows 2008 R2 that automatically balances the processor assignments are corrects the issue for most systems: http://support.microsoft.com/kb/2510206

The following knowledge base article outlines how to assign nodes to the processor groups so you have control over the group assignments. How to manually configure K-Group assignment on multiprocessor machines: http://support.microsoft.com/kb/2506384

Select a process, Right Mouse | Set Affinity -- the following dialog is presented showing you the Processor Groups (K-Group), Nodes and CPUs on the machine. 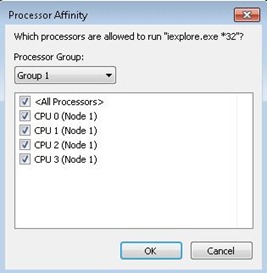 Even after all this work there is an issue using older versions of SQL Server ( SQL 2008 pre-SP3 and SQL 2008 R2 pre-SP2 ) which requires SQL Server to startup in the group that holds physical NUMA Node = 0 and at least 1 CPU assigned from physical node 0 to the instance, or lazywriter activity is not started property.   This can lead to buffer pool sizing, performance counters not getting updated and other stall and hang like behaviors (OOM, Latch Timeouts, …) of the SQL Server process.

As a general rule is best to start them in group 0 ( usually contains physical NUMA node = 0 but you must confirm this. )

"Allocation of child processes among the ideal nodes of Non-Uniform Memory Access (NUMA) nodes is not efficient, which results in performance degradation, increased latency, and cache misses, depending on the affected processes.

To correct this, edit the registry to change the inheritance of ideal NUMA nodes so that generated child processes are assigned the same IdealNode as their parent process. This setting is not system wide, but per-process.

Windows does not currently provide a per service, instance option for starting the service in a specific group.   To avoid starting multiple instances of SQL Server on the same processor group use SQL Server 2008 R2 or newer version and establish the proper processor affinity.