The first thing I did was download the package for the update from the following KB article:

This article includes a list of fixes contained in CU1.

If you remember, I wrote a blog post back in April on how you can download your own fixes from KB articles as seen from this screen shot of the article on the web: 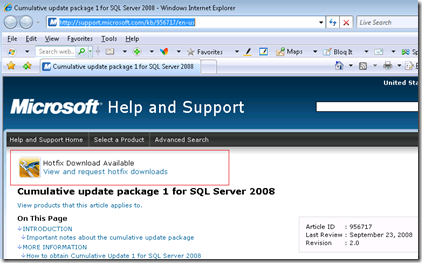 Once I received my email containing the hotfix download instructions, I downloaded the fix to the local drive where I had SQL Server 2008 installed. I then uncompressed the zip file, and ran the package (which for x64 is called SQLServer2008-KB956717-x64.exe).

Let's take a look at this journey of patching through a series of screen shots.

When I run the executable I am first presented with some setup rule checks to catch problems before I try to install. Notice how the screens look very similar to the user experience of the standard SQL Server 2008 setup you run from the DVD. 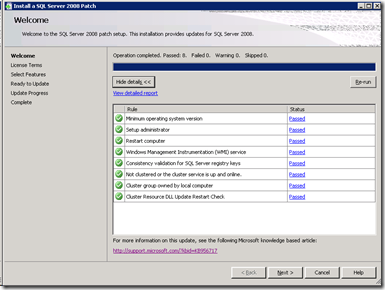 Next I need to respond to a licensing agreement (We've caught the wording mistake at the top. It shouldn't say "Service Pack").

Now you get to pick which instances to update (which in my case is only the default instance). 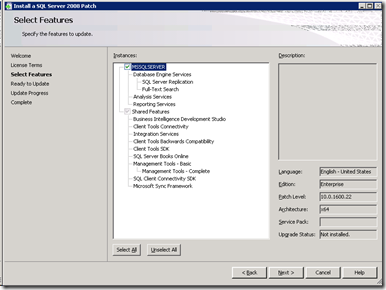 Notice the Version Information at the bottom right of the screen. It shows you information such as:

Service Pack : This eventually will be the service pack level (1, 2, ...) if installed

Upgrade Status : Not installed means this patch has not been installed yet. Installed would mean you have already applied the patch you are trying to install.

Hit Next and you get to confirm your selection

Select Patch and off you go with the update for CU1. When it is complete you will get a screen like this: 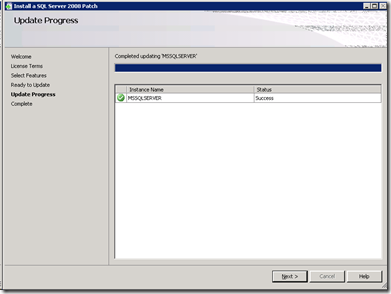 Hit Next and you see the final screen for the update. 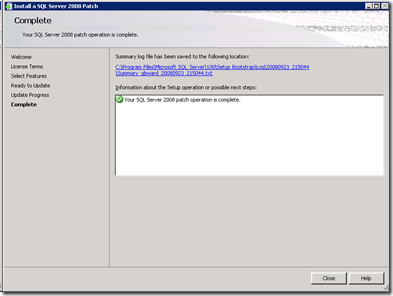 Notice at the top a link to a Summary log file. This is the same type of Summary log file you get for the standard installation of SQL Server 2008. If you had problems you would see that failure on this screen and use the Summary log file to determine the problem. You may also notice that this link points to c:\program files\microsoft sql server\100\setup bootstrap\log which is the same directory where the standard setup program stores log files.

If you click this link you can see from the Summary log file fragment I've included that this setup was run to "Patch":

Any way to avoid these screens?

Just like the hotfix installer for SQL Server 2005, there is a way to run a 2008 hotfix package without having to respond to the screens. The basic syntax look like this:

So for the x64 update, I ran this for my default instance:

A separate console window will be launched like the following: 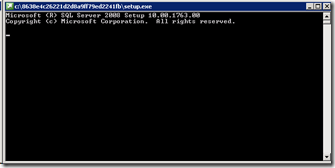 When the patch is complete this window is closed. You can check the summary log files to see if the patch was successful. You can also get more details on the progress if you use the /INDICATEPROGRESS option, but be warned it dumps a bunch of output to this console window.

Just like the SQL Server 2005 hotfix installer, you can uninstall SQL Server 2008 patches.  Here is a screen shot of "Program and Features" on my Windows 2008 Server machine after I selected "Installed Updates" 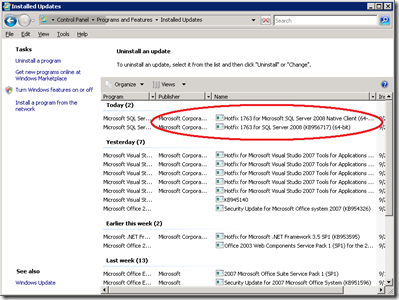 So I picked "Hotfix 1763 for SQL Server 2008..." and selected Uninstall from the menu above all the updates (you can also right-click and select Uninstall).

The screens look very similar to the process of installation... 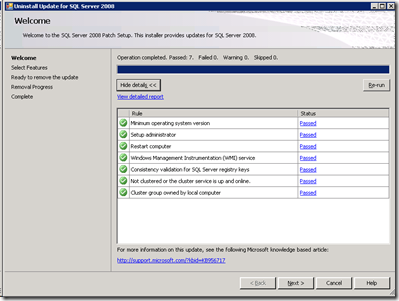 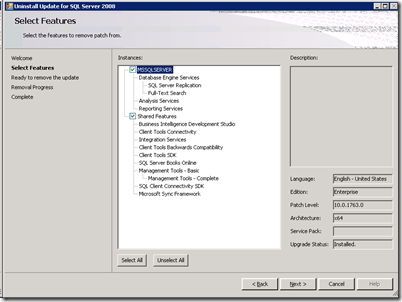 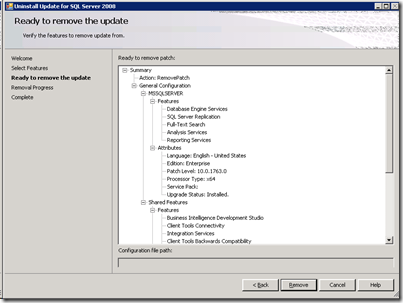 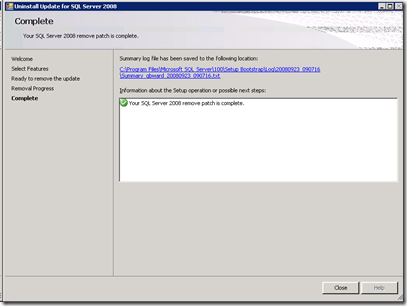 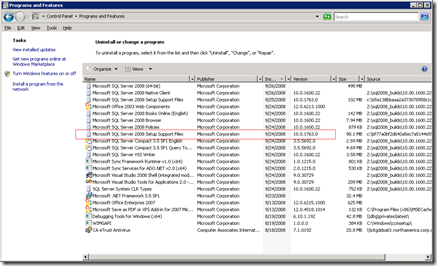 This allows you to take advantage of setup fixes we included in CU1 should you decide to use setup in the future to add instances or features.

How does this work? Well, read my next blog post where I will show you how we have devised a method to fix setup before you actually run setup (trust me it will make sense when you read the blog post).