Turn on suggestions
Auto-suggest helps you quickly narrow down your search results by suggesting possible matches as you type.
Showing results for
Show  only  | Search instead for
Did you mean:
The week that was PASS…
By


I’m sitting in SEATAC Airport waiting for my flight, so I thought now would be a great time to write up some thoughts and share some experiences of my week at PASS.  There was a ton of great information this year and we also announced Denali – the next version of SQL Server!  From what I could tell and hear, people were very impressed with the Crescent demo and looked forward to getting their hands on it.  Still have to wait a little bit for that though as it isn’t in CTP1.

Someone also mistook me for Adam Machanic.  While I was flattered, I was not he.

We had a great showing at the CSS Sessions.  Evan mentioned his talk was well attended.  Bob Ward’s is always packed and my Kerberos talk was way more than I thought it would be.  Hopefully the attendees got some great information out of it.  I personally enjoyed the back and forth with Paul Randal during Bob’s talk.  If you ever meet up with Bob, ask him what Paul Randal’s kid’s nick name for Bob is.

Atlanta was announced at PASS this year!  This is an incredible tool.  Bob, Suresh and Paul Mestemaker (and crew) have been putting countless hours into Atlanta and I think people will see the benefit and be a little surprised what they find with their servers.  There are great rules in the system.  The Kerberos SPN rule was demoed at Ted Kummert’s Keynote last Tuesday.  What added to that was in the SQL Clinic room, I referred several people to use Atlanta to try and help the potential kerberos issue they were having.  It came up several times.  It was a nice change from confusing customers with everything they would need to check and how to put it all together, to just being able to say, slap Atlanta on there and let it tell you what needs to be done.  A real time saver!

We were able to take a minute Wednesday night and get a shot of the CSS Atlanta team along with Paul.  I don’t remember if this was before or after the Sushi that Bob had to eat because we got the beta out at PASS.  He was a trooper with that though and ate his fair share! 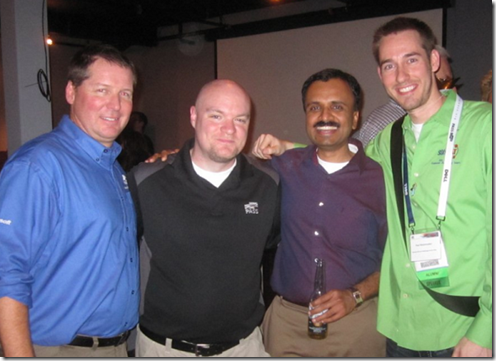 One thing that was amazing for me was meeting my fellow tweeps.  It was great to put some faces and names to the twitter feed.  Especially when you find out you are sitting behind someone you are talking to on Twitter and didn’t realize it.  Was great to meet you @erinstellato!  I really enjoyed connecting with people and talking about their frustrations and experiences.  I’m sure next year will be even better!

Every year the SQL Clinic room seems to get more intense.  This year was no exception.  The room was packed every day.  There were a lot of great conversations.  As always it was also great working next to the SQL CAT.  The collaboration between the two groups is great.  Cindy did an awesome job helping customers get to someone that could help!

1. How do I get the column headers in a report to repeat on every page? (I get this question every year – multiple times)

The trick with this one is there are actually two settings that you need to make sure are selected within the report.  First is the “Repeat header columns on each page” under the tablix properties.  The second is a little hidden.  You have to show the Advanced Mode for the groupings area.  There will be a static entry for the header row.  In the properties there is an option “RepeatOnNewPage”.  That needs to be set to True.  That should get it going.

2. Is there another way to get a hash value for your row outside of BINARY_CHECKSUM?

BINARY_CHECKSUM has limitations with the fact that the value may not be unique depending on the length.  Another option is to use the HashBytes function which can do an MD5 hash on a given value.  The problem is that that doesn’t necessarily do it for the whole row, so you would need to come up with a way to calculate a row signature using that.

3. Lots and lots of Kerberos questions…

Between the Atlanta demo and my Kerberos talk and people describing their issue, not realizing it was a Kerb issue, there was a lot of traffic on this topic.  We worked through it though.  I’m not going to go in detail on this blog post, but will be getting some more posts out on the topic as well as to dive into the whole Claims topic.  Also be sure to check out the Atlanta Beta and take advantage of the Kerb rules with how they relate to your SQL Server.

4. I’m getting a “Login failed for user ‘LinkedServerAccount’”

When an actual login name is in the error, chances are it’s a permission issue or the password wasn’t entered correctly if it is a SQL Auth account.  This is not a kerberos issue.  We were able to RDP into the affected server right in the Clinic room and correct the issue.  In this case, we created a test account and changed the Linked Server credentials to match the new test account and that worked.  WIth the same customer, we also helped to look at her Cluster setup as the cluster node was not coming up.

5. I’ve enabled SSL for Reporting Services, but the links generated in the Report have http, not https.

When you enable SSL for Reporting Services through the Reporting Services Configuration Manager tool, it does not adjust the SecureConnectionLevel setting in the rsreportserver.config file.  It will have a default value of 0.  Setting this to 3 will get the links to have https instead of http.

This actually comes up pretty frequently for customers wanting to get Reporting Services to have some sort of high availability. The important thing to realize is that RS is not Cluster-Aware.  So, even though you are putting it on a Cluster node, from an RS perspective, treat it like any other box.  The process will be running all of the nodes you installed it on and it will not be represented as a Cluster Resource.  Those instances will have different URL’s and may have different instance names depending on how you installed it.  Refer to http://msdn.microsoft.com/en-us/library/bb522745.aspx .  The way to get high availability with RS is to do a Scale out operation and stick a Network Load Balancer (NLB) in front of it with a virtual URL for the NLB.

7. How does Database Mirroring actually handle the failover from the connection side of things (failoverPartner)? (I think I got this question about 7 or 8 times from different customers)

I’m going to do a blog post on the internals of this and how it works.  It was clear that there were some misunderstandings of how this is actually handled.  But the questions I got relating to this were well thought out and very good.  Look for this post in early December after I get back from Vacation.  It’s on my list!

There were many more Reporting Services questions that I got along with a ton of Connectivity related issues and general troubleshooting advice.  I was also surprised with the Database Mirroring questions.  All in all, I was impressed with the types of questions I got.  The PASS community definitely is a bunch of smart people!

The last think I will leave you with is that I will be participating in the SQL Kilt Wednesday event.  Mark Souza said that we would get matching bright green Kilts to match with the SQL CAT shirts.  We’ll see if we can find them.  Should be awesome though!

Thanks for another great year at SQL PASS Summit!  I will see everyone again next year…