Turn on suggestions
Auto-suggest helps you quickly narrow down your search results by suggesting possible matches as you type.
Showing results for
Show  only  | Search instead for
Did you mean:
Temp table caching improvement for table valued parameters in SQL Server 2012
By


I wanted to point out a nice performance improvement related to table valued parameters (TVP) in SQL Server 2012.   It’s not currently documented in our online documentation.   But we have had customers who inquired about this.

When you use TVP, SQL Server internally uses temp table to store the data.  Starting SQL Server 2005, temp tables can be cached for re-used.  Caching reduces contentions such as page latch contentions on system tables which can occur as temp tables are created and dropped at a high rate.

If you use TVP with a stored procedure, temp table for the TVP will be cached since SQL Server 2008 when TVP was introduced.

But if you use TVP together with parameterized queries, temp tables for TVP won’t be cached in SQL 2008 or 2008 R2.   This leads to page latch contentions on system tables mentioned earlier.

Starting SQL Server 2012, table tables for TVP are cached even for parameterized queries.

Below are two perfmon results for a sample application that uses TVP in a parameterized query.   Figure 1 shows that SQL 2008 R2 had sustained a high “temp table creation rate” until the test is complete.  Figure 2 shows that SQL 2012 had just a very quick spike for “temp table creation rate” but then it went to zero while running rest of the test. 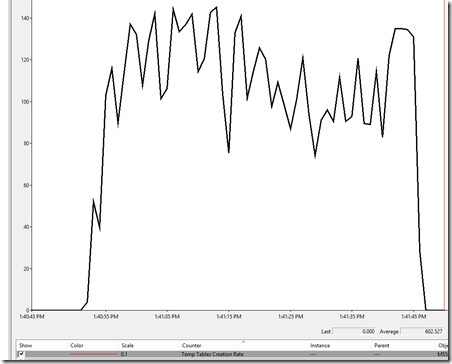 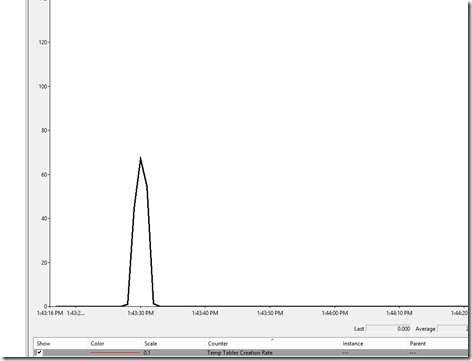