Turn on suggestions
Auto-suggest helps you quickly narrow down your search results by suggesting possible matches as you type.
Showing results for
Show  only  | Search instead for
Did you mean:
SharePoint Adventures : When connectivity is not connectivity
By


I’m always amazed that issues usually come in batches.  I was looped into a few cases that had the following symptoms.   They were running SharePoint 2010 and Reporting Services 2012 SP1.  When they went to use a data source with Windows Authentication, they were seeing the following error:

This caused me to raise an eyebrow (visions of Spock as the new Star Trek movie is opening today <g>).  A lot of thoughts were floating in my head that all told me that this error didn’t make sense, for a bunch of reasons.

Being this told me we had an actual connection issue via Named Pipes, I started down the normal connectivity troubleshooting path.  With any connectivity issue, I started with a UDL (Universal Data Link) file.  Basically just a text file renamed with an extension of UDL.  It’s important to run this from the same machine that is hitting the SqlException.  In my case it was my SharePoint App server, not the WFE server. 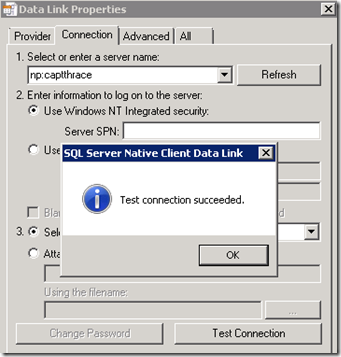 You’ll notice the “np:” in front of the server name.  This forces the Named Pipes Protocol and ignores the default protocol order.  And this worked.  I also tried “tcp:” to force TCP in the UDL and this worked to.  I went back to my data source and tried forcing TCP there. 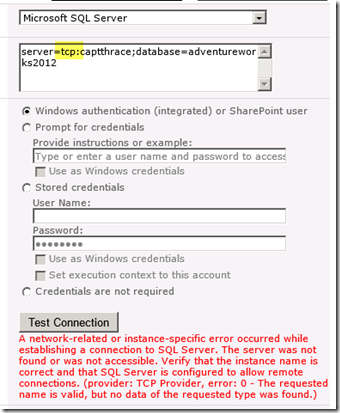 System.Data.SqlClient.SqlException: A network-related or instance-specific error occurred while establishing a connection to SQL Server. The server was not found or was not accessible. Verify that the instance name is correct and that SQL Server is configured to allow remote connections. (provider: TCP Provider, error: 0 - The requested name is valid, but no data of the requested type was found.)

This made no sense.  I even made sure I was logged in as the RS Service Account as that is the context in which we would have been connecting to SQL.  Same result.  Also, within a network trace, I saw nothing on either the TCP or Named Pipes side of the house in the trace that related to this connection attempt.  Which meant we never hit the wire.

As I was going to collect some additional diagnostic logging (Kerberos ETW tracing and LSASS Logging) I ended up doing an IISRESET and a recycle of the C2WTS service.  We went to reproduce the issue, but got a different error this time.

This error I did know and can work with.  I had blogged about this error last July here .  Checking the “Act as part of the operating system” showed that the C2WTS service account in fact was not given that right.  Adding that account to that policy right and restarting the C2WTS Windows Service and performing an IISRESET then yielded the following:

The connectivity errors were clearly related to the lack of the Policy Setting.  It was unexpected and didn’t line up with normal connectivity related issues and also wasn’t very helpful with regards of where to go look for more information as all of the normal paths didn’t show anything useful.