Turn on suggestions
Auto-suggest helps you quickly narrow down your search results by suggesting possible matches as you type.
Showing results for
Show  only  | Search instead for
Did you mean:
How It Works: File Stream Compression with Backup/Restore
By

How It Works: File Stream Compression with Backup/Restore


The question of file stream compression during backup and restore arose last week and makes for a good clarification topic.

From my 1980's days on the Mac, I decided to use the Stuff-It icon to show the point of backup/restore compression.   The compression used by SQL Server 2008 is not Stuff-It and it is also not .ZIP or .RAR or .CAB so I wanted a more generic view.   Now that I have dated myself pay special attention to the compression location.

Compression/Expansion takes place as the data is streamed to and from the backup media.   The type of data does not matter to the backup facility.   SQL Server just seems a stream of bytes, compresses or expands them as required. 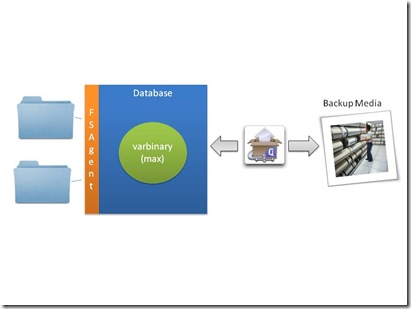 All data written to and from the SQL Server backup media can be compressed.   The only part of the media that is not compressed are the actual media headers.

The design is such that you can replace the folders in the picture with full text catalogs and the same data flow occurs for backup compression.

It is technically possible to mark the folders, used for file stream storage, compressed but not recommended by Microsoft.  You can review details of the WAL protocol and SQL Server in various Microsoft knowledge base articles.

SQL Server 2008 introduces TDE and compression of the data.   This is done with a layer similar to the FSAgent in the SQL Server engine. When data is retrieved or store do a page a lightweight translation layer takes the appropriate steps to encrypt, decrypt, compress or expand the data for the rest of the SQL Server engine.