Turn on suggestions
Auto-suggest helps you quickly narrow down your search results by suggesting possible matches as you type.
Showing results for
Show  only  | Search instead for
Did you mean:
What’s New in SSIS for SQL Server 2012 RC0
By


At the 2011 PASS Summit I presented a Top 10 list of features that had been added since CTP3 , or hadn’t gotten much attention so far. Now that the SQL Server Release Candidate 0 (RC0) available , I can start blogging about them! I’ll continue to post more details over the next couple of weeks.

Top 10 Features You Didn’t Already Know About (from PASS)

We’ve partnered with Attunity to provide some great CDC functionality out of the box. This includes a CDC Control Task, a CDC Source component, and a CDC Splitter transform (that splits the output based on the CDC operation – insert/update/delete). It also includes CDC support for Oracle. More details to follow.

ODBC Source and Destination components, also from Attunity, and included in the box.

RC0 makes some minor improvements to Shared Connection Managers (they are now expressionable), and changes the icons used to designate connection managers that are shared, offline, or have expressions on them. We also added a neat feature for the Cache Connection Manager – it can now share it’s in-memory cache across package executions (i.e. create a shared connection manager, load the cache with a master package, and the remaining child packages will all share the same in-memory cache).

Another feature that was added in CTP3 , but worth calling out again. The Flat File Source now supports a varying number of columns, and embedded qualifiers.

Ok, another CTP3 feature – but when I demo’d it at PASS, I did a live merge of two data flows up on stage. And it worked. Impressive, no?

We upgraded the scripting engine to VSTA 3.0, which gives us a Visual Studio 2010 shell, and support for .NET 4.

Oh… and we also added Script Component Debugging. More about that to follow.

More improvements to SSIS Catalog based logging. You can now set a server wide default logging level, capture data flow component timing information, and row counts for all paths within a data flow. 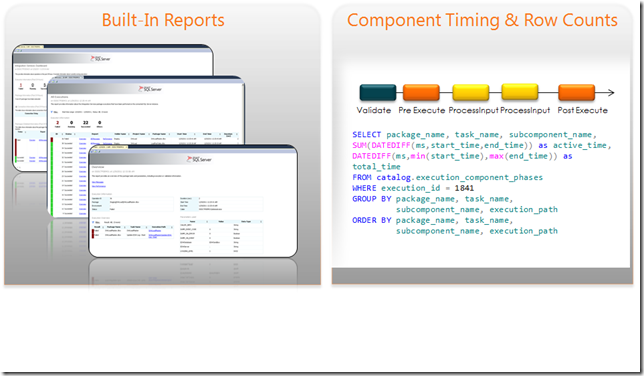 Another CTP3 feature that didn’t get enough attention. This feature allow you to programmatically (using T-SQL) add a “tap” to any data flow path on a package deployed to the SSIS Catalog. When the package is run, data flowing through the path will be saved out to disk in CSV format. The feature was designed to make debugging data issues occurring in a production environment (that the developer doesn’t have access to). 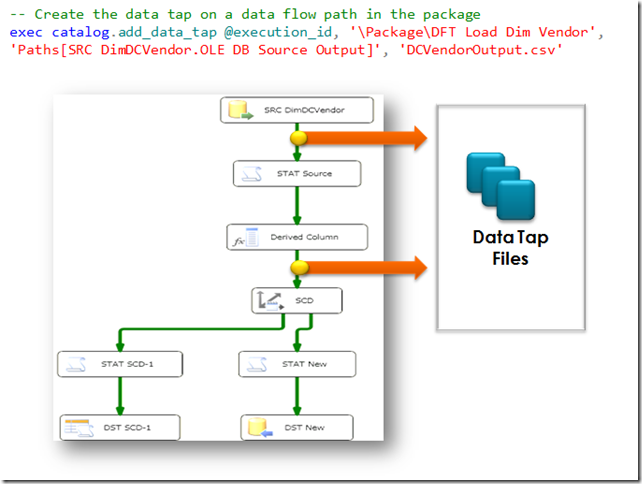 We’ve added PowerShell support for the SSIS Catalog in RC0. See the follow up post for API examples.