Today at DrupalCon SF 2010, we are reaching an important milestone by releasing a Community Technology Preview (CTP) of the new SQL Server Driver for PHP 2.0 , which includes support for PHP Data Objects (PDO). Alongside our efforts, the Commerce Guys , a company providing ecommerce solutions with Drupal, is also presenting a beta version of Drupal 7 running on SQL Server using this new PDO Application Programming Interfaces (API) in the SQL Server Driver for PHP 2.0.


Providing a PDO driver in SQL Server Driver for PHP 2.0 will enable popular PHP applications like Drupal 7 to use the PDO “PHP style” and interoperate smoothly with Microsoft’s SQL Server database.


For PHP developers, this will reduce the complexity of targeting multiple databases and will make it easier to take advantage of SQL Server features (like business intelligence & reporting ) as well as SQL Azure features (like exposing OData feeds ).


About the SQL Server Driver for PHP 2.0 CTP with PDO


My team and I have been working hard over the past months to introduce PDO into the existing SQL Server Driver for PHP. The decision to add PDO was a direct result of the feedback we received from the PHP community.


The new version now supports the API defined by PDO. Of course, we continue to maintain the existing SQL Server native API. To provide better support and consistency for both API, we are creating a common layer including the core features shared across the two API, as shown on the architecture diagram below: 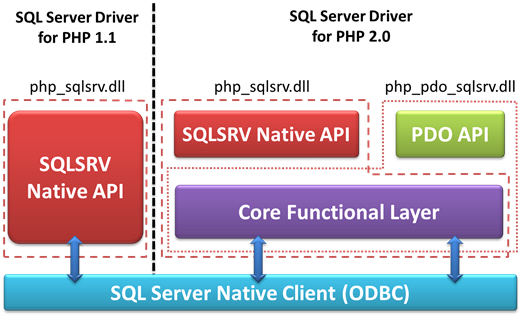 The SQL Server Driver for PHP 2.0 CTP is available for download at the Microsoft Download Center . Don’t be surprised if you don’t find the source yet, we have packaged only the binaries for now. Rest assured that the SQL Server Driver for PHP 2.0 will be available as a shared source project (like current version 1.1) in our next public release. We expect the final version in the second half of this year. Stay tuned!


Putting the SQL Server Driver for PHP 2.0 to the test of real world applications is a key aspect of our development process. We started a discussion with the Commerce Guys (a company providing ecommerce solutions with Drupal) who were interested in porting the upcoming version 7 of Drupal to SQL Server, and quickly realized we had a great opportunity to partner with the Drupal community.  So Microsoft provided some funding and initial support through technical specifications and early builds of the driver for Commerce Guys, in order for them to independently develop updates to the code for a contributed module for Drupal 7. After initial success with Drupal 7 working with SQL Server, Commerce Guys disclosed that the Views module, one of the most popular contributed modules for Drupal, also works well with SQL Server.


If you happen to be at DrupalCon SF, join us for the “ Drupal 7 and Microsoft SQL Server ” session (this afternoon at 4:15pm) to see it in action.


For more details about the work Commerce Guys did on Drupal 7, I invite you to read Damien’s blog for additional details.


Give it a try, send your feedback


Microsoft is very excited about this new milestone and the early success we’ve seen with Drupal 7. Having reached this important milestone, we are not done yet and continue to polish it up. We plan to ship CTPs on a regular basis, so stay tuned!


Of course, we appreciate feedback, which you can submit by visiting our SQL Server Driver for PHP forum or by visiting SQL Server’s Connect site .