First published on MSDN on Nov 14, 2016
Microsoft R Server is designed around the concept of PEMAs (Parallel External Memory Algorithms). An external memory algorithm is an algorithm which does not require all data to be present in memory, it can process data sequentially, generating intermediate results and then iterating on those results. These algorithms are widely used for statistical analysis and machine learning, and allow large datasets to be computed on relatively small amounts of memory. PEMAs are implementations of these algorithms which allow chunks of data to be processed in parallel on many cores of the system. Such algorithms require the separation of the requisitely sequential code segments from the parallelizable segments.

The rxExec() function in Microsoft R Server is not, in and of itself a PEMA, but is a tool provided to the user for the writing of parallel algorithms. Out of the box parallel MRS Algorithms, such as rxBtrees() or rxLinMod() , to name a few, are intrinsically designed to run on various distributed systems. rxExec() allows users to parallelize algorithms for operation on many cores of a single system; and allows algorithms which were not designed to operate on distributed data process data on distributed systems.

rxExec() takes as its [required] arguments:

A common use of rxExec() is to define a custom function for execution and passing the function, as well as its input parameters, to rxExec() , which will be provided to each parallel execution of the function.

For the purpose of generality, and providing examples which everyone can try, this article will focus on the local parallel compute context, “localpar”, that is, using rxExec() to parallelized algorithms across many cores of your local machine.

Let’s examine a simple example. We will use some open source packages to define a random dataset, and use rxExec() to take sums of subsets of the data in parallel, using system.time() to measure execution speed. In the first part of the example, we will use rxExec() the "naïve" way. Afterwards we will make some optimizations to our script, and utilize rxExec() in a more "correct" way. We will compare the performance and explain optimizations that can help the user maximize their performance.

When we execute this code, we see the following execution times (in seconds):


and the result is:
[1] TRUE
This was the naïve way to use rxExec() : Write a function and then call that function, passing the input parameters, within rxExec() . Unfortunately, we saw less than stellar performance. Considering the volume of data, this is not terrible, but, we can do much better with a few simple optimizations.

if we examine our call to rxExec() , we can see the bottleneck which is degrading our performance:

To optimize this parallel algorithm, we want to remove the overhead caused by serialization/deserialization. To do this, we will change how susbsetSums() accesses the dataset.

Example, the setup segment of the code is identical:

Executing this script, we get the execution time of as (in seconds):


Which is performance improvement of:

Viewed graphically, this is: 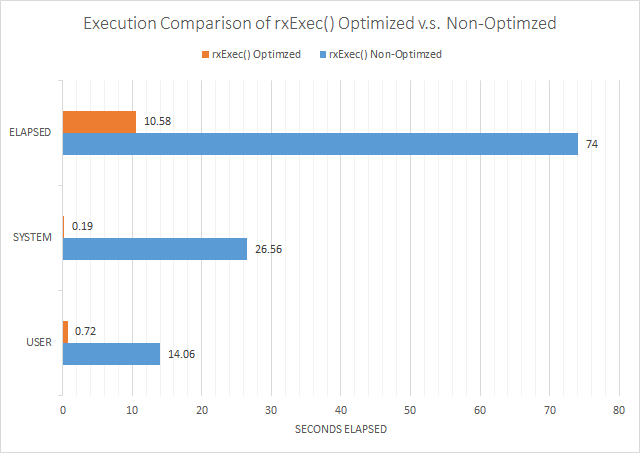 In conclusion, the performance bottleneck of transmitting large chunks across the named pipe is staggering, and completely defeats the speed increase that you get from rxExec() 's ability to parallelize algorithms. When writing R scripts for Microsoft R Server, a user cannot ignore the overhead of data marshalling between open source R and Microsoft R Server.
0 Likes
Like