The examples in this blog series are based on AdventureWorksDW2016CTP3 database that you can download from here .  For  each example, I will run the query in SQL Server 2014 and then contrast that with SQL Server 2016 and to reinforce the point that you get performance improvements without requiring any changes to your query or the workload.

In SQL Server 2014, BATCH mode Batch Mode execution mode was only supported when the query was executed with DOP > 1. The basic premise was that customer running big analytics query will run it on multi-core machines with high degree of parallelism. While this is all good, but imagine you are running  your analytics workload on a Server with 16 cores and everything is running smoothly. Let us say the concurrent workload spikes,  SQL Server can choose to decrease the DOP automatically. In the extreme case, it is possible that the queries get executed with DOP=1. As you can expect, running query single threaded will increase the query execution time proportionally. However, the impact on queries using columnstore index is a lot more severe because SQL Server 2014 will also switch to Row Mode execution. Its like double jeopardy – your query slowed down both because of single threaded execution as well as Row Mode execution. This is what I refer to as Performance Cliff, a sudden significant drop in the query performance.

In the example below, we run a simple aggregate query on a SQL Server where MAXDOP has been configured to 0 which allows SQL Server to choose available DOP. As you notice, that this query was run in BatchMode with 4 threads. The query execution time was

Now, let me run the same query but specify DOP=1 explicitly to force single threaded execution. As shown the picture below, the query runs single threaded in RowMode. For this case, the query execution time increased by 8 times; from 354ms to 2617ms. 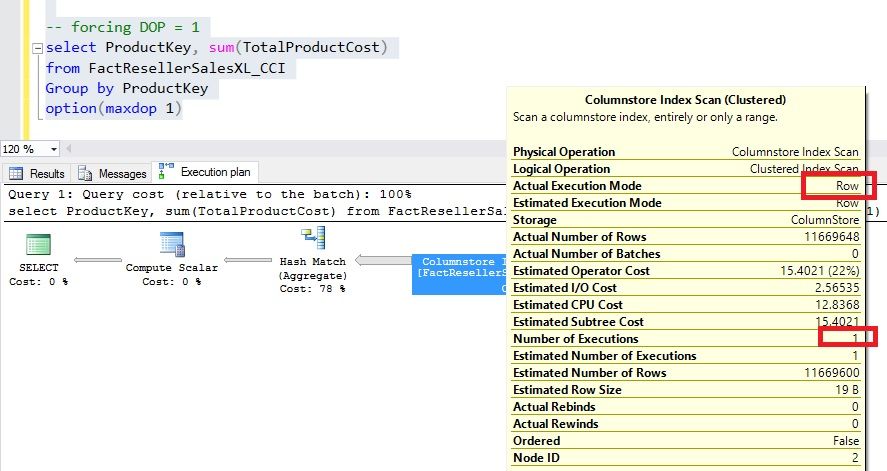 Now, let us run the same query ‘as is’ in SQL Server 2016 on the same machine. The picture below show the query run single threaded by explicitly forcing DOP=1. Note, the query was executed in BatchMode as shown so no more Performance Cliff!! 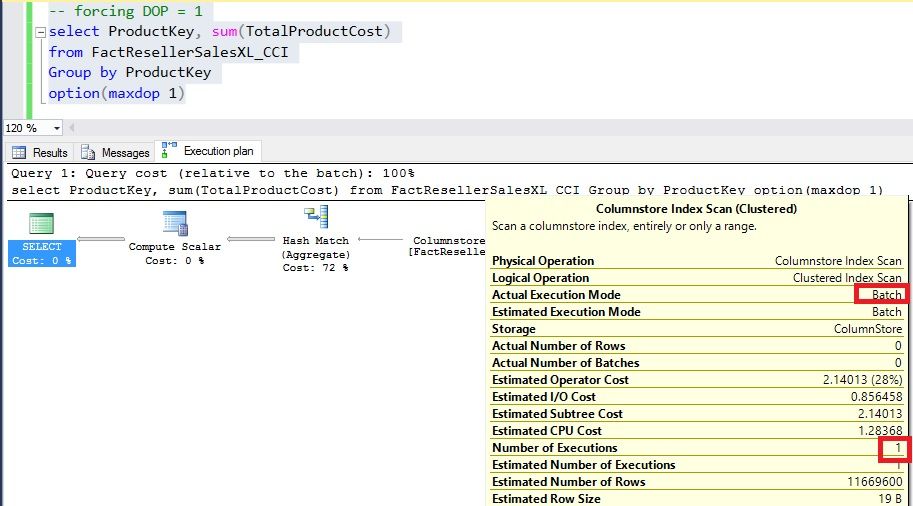 As you can see that with SQL Server 2016, there is no more performance cliff and your queries will continue to leverage BatchMode execution irrespective of degree of parallelism. You will need DBCompat 130 (i.e. SQL Server 2016 default compatibility level) https://msdn.microsoft.com/en-us/library/bb510680.aspx for this optimization.