Aggregates are a very common construct in analytics queries. For example, you may want to aggregate sales per quarter for each products you sell. With columnstore index, SQL Server processes aggregate in BatchMode thereby delivering order of magnitude better performance when compared to rowstore.  SQL Server 2016 takes the aggregate performance to the next level by pushing aggregate computations to the SCAN node. Yes, this improvement is on top of BatchMode execution.


SQL Server 2014 scans these 10 million rows in batches (e.g. 900 rows) and sends these batches to Aggregate operator to compute the aggregate.  The picture below shows 10 million rows moving from SCAN node to the Aggregate node. 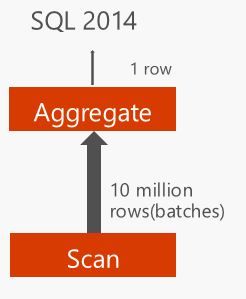 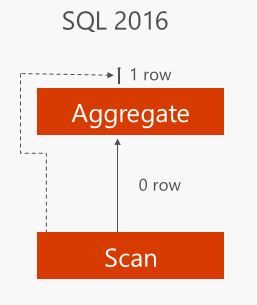 The picture below shows a aggregate query and its execution plan. Note that all 11 million row flow from SCAN node to the AGGREGATE node.

The query execution time for this query was as follows

The same query was run ‘as is’ on SQL Server 2016  and as the picture below shows the aggregate computation was indeed done at the SCAN node. The query execution time for this case was 2x lower than what we saw with SQL Server 2016. A more interesting number is the CPU time which was 3x lower than SQL Server 2014. In actual production workloads, we have seen much more dramatic performance gains. 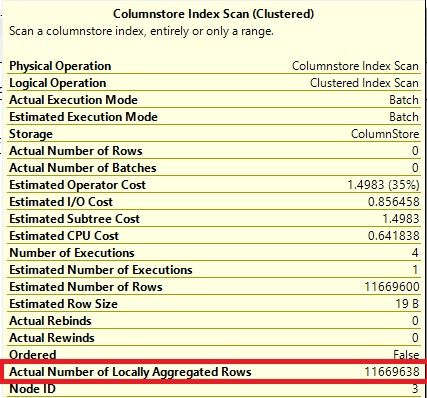 To show that Aggregate pushdown optimization is not a available for rows in delta rowgroup, I copied 50k rows into new table temp_cci with clustered columnstore index and then I ran the same aggregate query as shown in the picture below. Note, that all 50k rows are flowing from SCAN node to AGGREGATE node 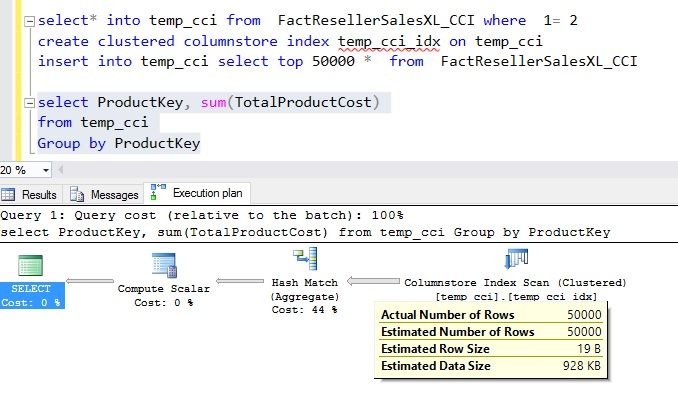 In summary, Aggregate Pushdown will give you the performance boost automatically when you upgrade your application to SQL Server 2016 requiring no changes to your query. Here are the  supported cases for Aggregate push down


Aggregate push down is not supported for