Michael Scherotter is a Media Experience Evangelist at Microsoft who works with media companies to help them build apps, works with 3D printer manufacturers to help them write drivers, and is part of the Small Basic development team who brought Kinect objects to Small Basic 1.2.


We are excited to announce that a new version of Small Basic is now available with some cool new Kinect objects, language improvements, and bug fixes.  If you don’t know, Small Basic is Microsoft’s free BASIC programming environment for kids and is part of a family of easy-to-use free coding tools for kids that includes Kodu Game Lab and Touch Develop .


If you are running Windows 8, Windows 8.1, or Windows 10, and have a Kinect 2 Sensor or Kinect for Xbox One Sensor attached to your PC, you will see three new objects available to you in Small Basic: KinectWindow , KinectBodyList and KinectFaceList .  You can use these objects separately, with each other, or with any of the other Small Basic objects.  Think of them as three new objects to program with that enable your body to become an input device for Small Basic.  Each of the new objects are fully documented with code samples in the Intellisense window that you can copy/paste to the code window: 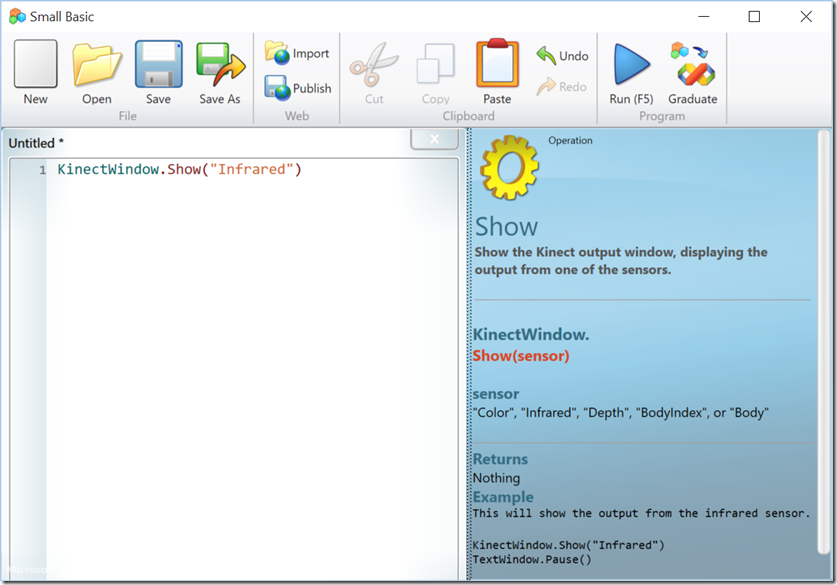 
KinectWindow is like GraphicsWindow or TextWindow in that it represents a window on the screen.  It’s main use is to let you see what the visual sensors in the Kinect are detecting.

In addition to visualizing what the sensors “see”, the KinectWindow object also has the ability to remove the background and place people in front of other images in real time. 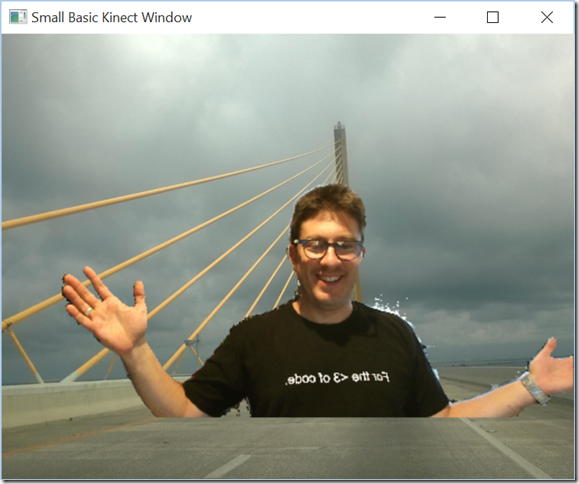 
Use the KinectFaceList to track the orientation, expression, and position of up to 6 human faces.  You use KinectFaceList.GetFaceProperty() to get aspects of faces like Happy, Engaged, WearingGlasses, LeftEyeClosed, RightEyeClosed, MouthOpen, MouthMoved, or LookingAway.  Using the KinectFaceList.GetBoundingBoxInColorSpace() in conjunction with KinectWindow.CaptureCroppedImage(), you can detect where faces are in the scene and grab their images to use in your Small Basic program.


We are sure that you will think of something cool to do with Kinect and Small Basic as we’ve tried to make it as easy as possible to start programming with a Kinect sensor.  If you have used the Kinect sensor already, you will probably realize that only a portion of its capabilities are exposed today in Small Basic 1.2.  You can do even more with the Kinect for Windows SDK 2.0 , like define visual gestures and use the microphones built into the Kinect sensor.  We would love your input if you have any suggestions for enhancing the new Kinect objects or any other part of Small Basic.


If you want to be a hero and start teaching Small Basic to kids, you can find tutorials, curriculum, community, and samples here .