Turn on suggestions
Auto-suggest helps you quickly narrow down your search results by suggesting possible matches as you type.
Showing results for
Show  only  | Search instead for
Did you mean:
Split-Brain Domain Name Services for Communications Server
By


There is much to think about in the design of your network perimeter for Office Communications Server-several services are offered in the perimeter network through the Edge Servers. The primary goal when implementing a split-brain DNS solution is to provide a near total disassociation of the internal DNS servers and the perimeter DNS servers. This provides easier and faster resolution for clients and prohibits an external DNS server from initiating communications with your internal DNS. This article explores several design considerations and explains why it is important to include a perimeter DNS server in your network topology.


Services offered in the perimeter network through the Edge Servers include the following:


This article explores these design considerations and explains why it is important to include a perimeter DNS server in your network topology.


Why You Should Include a Perimeter DNS Server in Your Design


When determining the requirements and designing your perimeter for Office Communications Server, if you are currently not using a DNS server in your perimeter for name resolution, you are likely already using one of the two following solutions:


While either of these could be used for Office Communications Server, some technical and security-based issues to consider are the following:


How DNS Works in a Split-Brain Configuration


But what if the client is internal and the query that it sends to its local DNS asks about a host that is not on the internal network? The internal DNS server should forward any query that it cannot answer to the next most authoritative server-the ISP DNS. How this results in faster DNS resolution for the typical client setup is that a domain name that is requested is compared against the domains that the client's configured DNS servers knows about. And if they don't have local knowledge of the requested domain, forward it to a more authoritative server. The process of referring to more authoritative servers continues until the DNS server that holds the Start of Authority (SOA) record is located, and the requested records (with associated IP address) are returned to the client. 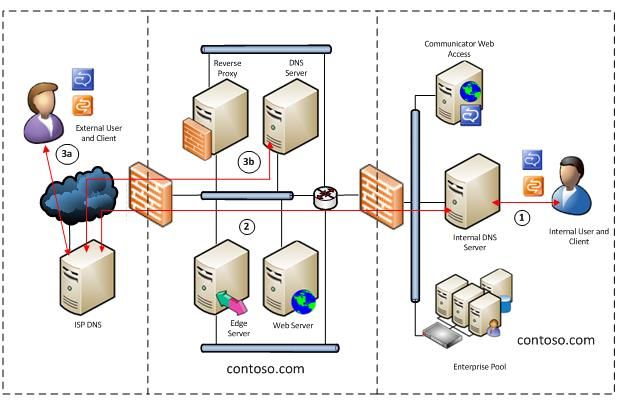 
Reviewing the query/response patterns in the same domain name example and referring to Figure 1:

For this scenario, we would define the following A records in Table 1. The listed SRV records in Table 2 would allow for automatic configuration of Office Communicator clients and federated scenarios. 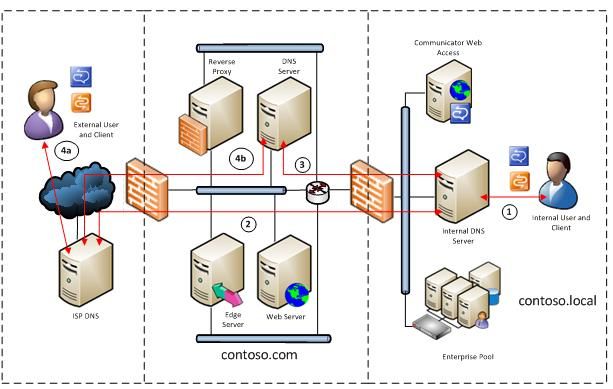 In this case, much like our previous scenario, the internal DNS resolves and manages all internal resolution. And, it is also responsible for forwarding queries for domain names that it does not know to the ISP DNS.


To resolve the issue of the internal clients finding the perimeter DNS, conditional forwarding is used to define how to resolve queries for contoso.com. Conditional forwarding is a method to forward all queries for a defined domain name to a specific server or set of DNS servers. This functionality was introduced in Windows Server 2003. Note that the Start of Authority (SOA) for contoso.com is on the DNS server in the perimeter, while the SOA for contoso.local is on the DNS server located in the internal network.


A conditional forwarder is created on the internal DNS to forward any queries for contoso.com to the perimeter DNS server. The perimeter DNS server will provide an answer (if one exists-if the query for a non-existent host is asked, it will usually fail) and return the query to the internal DNS. This is the method used to maintain the one trust zone method for integrity of the trust zones. You can also configure the firewalls that are protecting your perimeter and internal networks to use only UDP port 53 for DNS queries because a UDP packet cannot transfer the entire zone data in one request, where TCP can break the information up into multiple packets.


The configuration of records on the perimeter DNS servers is no different than the first scenario. The same A and SRV records are implemented as shown earlier in Table 1.


Reviewing the query/response patterns in the different domain name example and referring to Figure 2:


A common tenant for internal and perimeter network protection is to disassociate the services as much as possible from those in other trust zones. DNS services, as important as they are, do pose risks that have been well-documented in the history of the Internet. By separating the trust zones for which the DNS servers are responsible, much of the risk can be mitigated.


With Office Communications Server (and very similar to the DNS solutions presented here), the Edge Servers disassociate the pool servers from direct external contact by providing a strong separation that takes place in the perimeter by having the Edge Servers first receive the requests, and then pass on the requests to the internal servers.